Source: Sunday Times
It's up there with Star Wars as a fabulous adventure story that delivers cinematic magic. Cosmo Landesman is entranced by The Fellowship of the Ring. 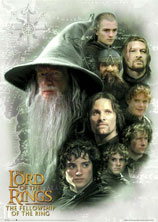 © New Line Cinema.
In the 1970s, the Hollywood blockbuster looked like an invincible force of global entertainment and cultural conquest; since then, it has become a bloated and bland beast that keeps turning up on a wave of hype and leaving in its wake a trail of indifference and disappointment. If, like me, you've been watching films like Planet of the Apes, Pearl Harbor, Lara Croft and Harry Potter, and wondering where's the magic, I can at last tell you: it's here in the director Peter Jackson's film adaptation of J R R Tolkien's The Fellowship of the Ring. For here is a blockbuster that actually delivers the goods.

Jackson - who is best known for Heavenly Creatures - has pulled off a remarkable feat of film-making because the fantasy genre is so difficult to do well. Fantasy films are the dodgy-holiday films of the imagination. They promise to take you to a fantastic other world of magic and enchantment - and then dump you in the same old cardboard medieval village with a crazy yodelling lesbian warrior, a dozen smiling dwarfs and a horse with a cone attached to his forehead. There you will find a hunky hero with a headband - who looks like a gay strippergram - doing battle with the Dark One to save humanity.

But Jackson's film is fantasy of a very different and superior kind. He brings back to this tired and frivolous form the element of the fantastic. He's created an exciting adventure epic that is humane, scary, thematically rich, visually inventive and stuffed with wonderful characters and stunning sets and sights. What's more, most fantasy works look utterly fake, but Jackson has constructed his film with a meticulous realism and concern for detail that gives his Middle Earth world a flawless look of authenticity.

The Fellowship of the Ring is the first in a trilogy of films. This one opens with a potted history of the making of the 19 magic rings and the blood and mayhem that follow. Jackson plunges us into a dark drama of war, human greed and corruption and then straight out to the other side and into the sunlit green fields of the Shire of Bag End. This is Hobbit land, and the home of our young hero-in-waiting, Frodo Baggins (Elijah Wood). He's a small, wide-eyed boy with big hairy feet. (Hobbits are always under 4ft tall.) Frodo and the village children are excited by the surprise arrival of the great wizard Gandalf (Ian McKellen) for the birthday party of Frodo's elderly cousin Bilbo Baggins (Ian Holm). All grey hair and busy beard, McKellen's Gandalf is a perfect pipe-puffing mix of gravitas and goodness.

Bilbo tells Gandalf he's planning to leave the shire and hand everything over to Frodo - his comfy hobbit hole and his magic ring. But Gandalf soon discovers this is no ordinary ring but the big daddy of all magical rings, the one that Sauron, the dark Lord of Mordor, desperately needs to achieve absolute power. Gandalf tells Frodo he must flee the shire as nine black faceless hooded riders - servants of Sauron, who are neither dead nor alive - are after him and the ring. We've all seen black hooded riders before, but not the way Jackson shows them. He focuses on small details - the dagger-like boots of the riders, the deadly hooves of the horses - to suggest some terrible thing just out of view.

On the fraught journey that Frodo and his hobbit friends are forced to undertake there are encounters with good - a mysterious warrior called Aragorn (Viggo Mortensen), who battles alongside them, and the help of an Elfian beauty called Arwen (Liv Tyler) - and bad: evil is never far behind. The ring, which Frodo must protect against all odds, is an powerful as some all-consuming addictive drug. There is a nice chilling moment early in the film when Bilbo is talking to Gandalf about giving up the ring - and suddenly he can't let it go. Sweet Bilbo starts sounding like the monster Gollum, with his whispered cries of "my precious." So, alongside the battle on the outside world, Frodo must face inner temptations as deadly as Sauron's forces. Jackson shows us Frodo, at one point, sweating like a junkie trying to kick the ring habit.

Usually it's hard to see what a tale of wizards, elves and warriors has to do with our world. But The Fellowship of the Ring is not some morality tale for fantasy-loving nerds who prefer escaping into whimsical medievalism rather than face reality. This movie speaks directly to our times. Until recent events in America, you could say we in Britain were fast becoming a nation of Hobbits; like them, we'd become devoted to the values of domesticity. Hobbits are housebound creatures who crave comfort, cups of tea and sitting by the fire while sausages sizzle in the frying pan. Tolkien's book and Jackson's movie suggest we have to be committed to some cause greater than mere comfort and materialism.

The most successful contemporary TV fantasy tales, like Buffy and Zena, rely on camp humour and sex appeal to sell themselves to the young. What's so wonderful about Jackson's film is that he's resisted the temptation to do a Baz Lurhmann and modernise his story or make it appealing to contemporary youth. He's not only true to Tolkien's story line, but its spirit and sentiments as well. It's not a film that tries to be sexy, nor does it give us streetwise Hobbits or Elfish babes kicking Black Rider butt. (The fight scenes are superbly staged and, for once, create a real dramatic tension.) One of the most appealing things about it is its unabashed celebration of fellowship. Between Gandalf and Bilbo, and Frodo and Sam, Boromir (Sean Bean) and Aragorn, there is a great chain of affection and friendship. Characters are forever hailing and hugging each other when they meet or part. Here is a merry band of brothers that anyone would want to belong to.

This is not some touchy-feely film, either. Okay, the women here are too hippie-dippy for modern tastes. But I can't remember when I last saw such a stunning collection of scary creatures, like the demonic Orcs of Moria with their rotten skin and yellow eyeballs, or the slimy Satanic Uruk-hai, who are a special breed: half-goblin, half-orc.

The Lord of the Rings ends not with a bang but a quiet cliffhanger. The film is so terrific that after almost three hours in the cinema you leave for home longing for more.