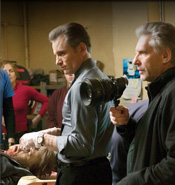 © Focus Features.
The upcoming Eastern Promises marks the second collaboration between David Cronenberg and Viggo Mortensen since A History of Violence in 2005. A crime drama with an interest in principles of family, Eastern Promises revolves around the underground slave trade in London run by the family-controlled Vory V Zakone (literally 'thieves in honor'.)

It's easy to see how Cronenberg might find interest in this story of "the other London." In the earlier part of his career, Cronenberg was known for developing a specific brand of horror that bridged sex, death and existentialism. Now, his films are courting a more mainstream audience, and the involvement of Mortensen is clearly continuing for more than just commercial reasons.

Reserved yet kindly, Cronenberg and Mortensen had an easy rapport and at times seemed almost brotherly in the way they jabbed each other. However, without too much demonstration one can sense a mutual respect within their unique collaborative process. In this interview with RT, Mortensen and Cronenberg discuss the importance of audience approval, recommend a book about Russian prison Tattoos and dispel rumors about upcoming projects.

Before I begin, I wanted to ask how you two feel about discussing one film versus discussing films. Some artists really don't like discussing their bodies of work and others are consciously creating a body of work.

Viggo Mortensen: We have no fears of our bodies or our body of work.

David Cronenberg: But we are here to promote this movie. The problem with talking about body of work is that you can mush out generalities. If you wanna try, I'm willing to.

Okay, how do you feel this film fits in with your body of work?

DC: I don't think about that. That's for you to think about. I'm not being flippant; literally I don't have any perspective on my body of work. That's a critic's thing or a filmgoer's thing. I'm the last person to actually assess my own work. Plus, I'm very dependent upon the reception of the film to determine how well it works or doesn't work and the movie hasn't come out yet so I really don't have a perspective on this movie.

Do you feel the same?

VM: I would be lying if I said I didn't care about what people thought of my work, of our movie, especially when I think it's a good movie, which I do. And I was pleased that with A History of Violence, not only did critics like it, if you look at all the reviews and top 10 lists it was probably the best reviewed film of the year and obviously it did well in the box office and I was happy about that. I was less happy that as the season wore on it was kind of forgotten and I thought it was shocking that David Cronenberg wasn't on any best director list - he should have won several of those awards, in my opinion - but those things are sort of a crap shoot. In this movie, like he says, it hasn't come out yet so, we'll see how people react. I do feel it's every bit as good as History of Violence. It's a completely different kind of story, made by the same director. I'm also in it, but other than that it's a completely different approach to story telling.

When I make a movie, I don't break it down and analyze it. I could but it would get in the way of doing a job - on instinct based on all the research we did going in. you want to trust yourself and your director and your acting partners in the circumstances you're shooting. I don't like to have any kind of overview. I just feel we did a good job and at the end of watching the cut I saw of Eastern Promises, I felt as I did after I saw A History of Violence, I felt, "What's going to happen to these people? I don't have all the answers and I want to see it again." That tells me it's a good story, well told and I can only hope others feel about it as I do.

DC: We're like old hippies: We only live in the moment. It's a "be here now" thing. Each time you make a movie for me, it's the movie. You're not thinking, "This will remind people of that movie. " I think you paralyze yourself if you do that. I think of the movie trying to be what it wants. Each movie has its own ecosystem. It's quite unique. It's like a little planet on its own. And maybe it's in a solar system with my other movies - if you think of my other movies as a kind of solar system with me as a sun, of course. I haven't done this before so see, it was provocative, and now you know they're all revolving around but they're all at some distance. It's a decent metaphor. I'm on the Eastern Promises planet now and still dealing with that. I literally just finished it a week ago. It's really hard to assess. In retrospect one might say "I shouldn't have made that movie it was a terrible decision." But it really is a critics' game and that's up to you. Maybe. I'm not being evasive. I'm telling you the truth. It's very hard to assess your own work, in particular beginning with a film that you just finished.

When I read interviews about History of Violence, the interviews really emphasized the degree to which you two collaborate. Tell me, how do you two work together?

DC: It's a total lie. I do everything, Viggo does nothing. I do all the work. But he pays me to say that he does a lot of stuff.

VM: Also to say that I'm thoughtful and considerate.

DC: No, it's a real collaboration, and it has very much to do with the kind of person Viggo is. I have been saying recently that with Viggo you don't just get a violin, you get a whole symphony orchestra. To give you an example, the tattoos, which are a crucial part of this movie, were alluded to in the script originally but just alluded to. Viggo found, while he was digging around and trying to get into this character, he found a book called Russian Criminal Tattoo, which is a fantastic book. Really recommend it. He also found a documentary by a friend of his named Alix Lambert which is called The Mark of Cain, which is also about tattooing in Russian prisons. He sent it to me. I sent it to (screenwriter) Steve Knight. I said, "When you read it, it's going to blow your mind, and when we do our next rewrite, you will, as I will, want to incorporate this as a central metaphor for the movie." So, that all came from Viggo. I don't know that we would have come across that otherwise. That's just one practical example.

VM: Or we could have found it too late to change anything. I knew that even before we started A History of Violence, there wasn't any distance, we just didn't' know each other as well. We weren't speaking as much before the film started...

VM: It's kind of your fault. You made me feel, unlike a lot of directors, that it was okay [under his breath] which may have been a big lie. And you also seemed to understand that I accepted if something wasn't useful. If I gave you 20 bits of information I had found, some directly useful and others peripheral to the story - (referring to History of Violence) to do with the Midwest, to do with Philadelphia, to do with a kind of hand-to-hand combat. What was useful would be used or molded to fit our purposes for telling the story and what wasn't useful would be discarded and there was nothing personal in that rejection or acceptance.

DC: That's his fault. A lot of directors are protective. They don't want the actors to get involved in those kinds of things, like rewriting the script or making notes on the scripts or not just talking about their character but talking about the shape of the movie, because they fear that the actors will all be warping it for their characters and possibly for their ego. And certainly for some actors that would be true. So a director needs to worry about all the characters not just your character and if you don't have that directorial overview you're warping the movie with your obsession with your character. But Viggo's not like that. If I were to say, "That idea of yours is f---ing awful" - and I wouldn't say it that way - but we would just laugh and it wouldn't be like I rejected him personally and therefore now he's hurt and it becomes a big melodrama. (It's) nothing like that. It's like two artists having a discussion

DC: Right, not about the specific character about the story. And we know that about each other then it's fantastic. When we started Eastern Promises we've done that, we know it's real not just a façade. And then it's great but then collaboration at that point is fantastic. I have that with my crew, most of whom I've worked with before and then Viggo becomes part of my crew. And that's really unusual.

What's next on the roster?

DC: I don't know what I'm doing next. We actually got Maps of the Stars taken off IMDb because there are all these projects that I've been playing with and thinking about but none of them is going so at the moment I don't know what I'll be doing - whereas he has already done another movie - the slut!

VM: He hates it when I work with other directors. I did Good and I'll also work with Ed Harris in a movie called Appaloosa - but don't tell David.

Right - it'll be our secret.