By - translated by Ollie, Rio, Sage and Zooey 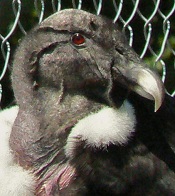 © Chrissie. Used by permission.
Through an initiative of Darío Barriga, the president of the Municipal Council, the municipal legislative body approved, in a regular session, the granting of an award for educational merit to the creator of The Path of the Condor.

The documentary film, directed by Christian Holler, head of the production company Altaco Project, and narrated by the actor Viggo Mortenson, tells the story of the investigative journey undertaken by an ornithologist (Lorenzo Sympson) and a hang-glider pilot (Martín Vallmitjana) in search of the secrets of the life and flight of the Andean condor.

"Holler's work has become a source of pride for Bariloche which is already making its way beyond our city, being shown in various parts of the world, for which reason, this Municipal Council cannot distance itself from such a achievement by a native of Bariloche," Darío Barriga said.

This Argentinian film has won the Best Picture award at the International Documentary Film Festival held in Spain. The panel of judges of this festival not only evaluates the artistic and technical quality, creativity, and originality of a work, but also seeks to educate the international population about environmental values and at the same time make known and promote the best locations for bird-watching.

The Path of the Condor is the first film in a series of three documentaries and the objective that motivated its director, Christian Holler, to shoot the film is based on four fundamental themes:

First, his constant inner searching led Christian Holler, photographer, director, and producer by nature, to combine the natural environment and the film set.

Second, his passion for telling stories drove him to film documentaries with educational content. In this case, the sportsman and the scientist get together on a research journey in which they exchange experiences that will push them to question themselves and reconsider their ways of coexisting with nature.

Third, their affection for nature made that in itself the propitious scope in which to develop their projects, thus showing Bariloche and Argentine Patagonia to the world.

As regards the fourth theme, Holler is a flying enthusiast. That´s why the idea of this film was born out of his own questions and answers as a hang-glider pilot and observer of nature.

For this documentary, the producers gathered professionals well-known for their experience such as Lorenzo Sympson, an ornithologist residing for years in our city who has dedicated himself for decades to research on condors.

Martín Vallmitjana is a hang-glider pilot dedicated to imparting the secrets of this great sport to those who attend his school in the neighbouring town of El Bolsón.

The voice narrating the documentary in Spanish and in the English version is that of the Argentinian actor Viggo Mortensen, who apart from acting in well-known films is a multifaceted artist who writes, paints, composes music, is a photographer and owns a publishing house.

He is a sensitive artist and passionate about Argentina. He was enthusiastic about the ecological and educational impression that would be expressed in the documentary, The Path of the Condor.

On the other hand, the producer, Altaco Project, signed a contract with Discovery Networks Asia-Pacific. The international company acquired the rights to show the film on its Animal Planet channel.

In this way, the documentary by Christian Holler becomes the first independent production from Argentine Patagonia to be chosen by the number one documentary company in the world.

Japan, China, India, Australia, New Zealand, Korea, Vietnam, Indonesia, Thailand, Cambodia, Laos, Malaysia, Mongolia, the Philippines, Singapore and Taiwan will be among some of the countries that will see The Path of the Condor at this early stage.

As indicated above, I consider it appropriate that this Municipal Council grants recognition to director and producer Christian Holler for his educational achievement in the making of The Path of the Condor.