San Lorenzo Is A Religion

By Diego Martini - translated by Ollie and Zooey 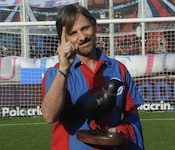 © stella pictures.
Listening to Viggo Mortensen talk, it's as if the interviewee were a skillful, clever, witty Belgian winger. Any unsuspecting person might determine "this one was born in Barracas," clinging to the famous Argentinian cunning that has so benefited us and caused us so much damage historically.

His quiet way of speaking doesn´t make a New York accent evident. Much less Danish. Maybe because of that experience filming Alatriste in Spain, after months of speaking pure Castilian, or, quite likely, because he feels like a resident of the neighbourhood of Boedo, which is his mission in life, something that strikes you when you listen to him singing the long-suffering tango Silencio, by Le Pera, at an anti-war rally. A resident of New York as well as Los Angeles, the actor cannot cut the ties that bind him to the neighbourhood he knew as an adult, because as much as he lived in Buenos Aires for 11 years ("downtown," he recalls), he never visited it until 2003, when he returned to Argentina for the promotion of The Lord Of the Rings. So he has an account with several airlines to drop everything and fly off to see the Ciclón play. Or to sing at the party for the Club´s Centennial. Or, as in this last instance, to inaugurate the chapel in Ciudad Deportiva, built thanks to a donation from him. "When I´m away, it is hard for me, as it is for anyone. When we lose, it is hard for me to go to work," he tries to explain, feeling himself a born Argentinian.

At least you follow what goes on with the team, don´t you?

On the Internet, sure. I can also watch the matches on television. When we were champions in 2007, I was working with English people and one of them was an Arsenal fan. I told him that we were going to win against the Argentinian Arsenal and began a nice soccer chat. And the director told me that the Argentinians are cheats, but on the field, they are incomparable; if not, they wouldn't be so sought after. But that's how they see them, always trying to take advantage. And even though there is certainly some of that, for me you have to evaluate the quality of the soccer and also of the individual. The truth is they have always welcomed me more than well. In the end, it was an excellent match and we were able to get the title.

But you have transformed yourself into the number one fan; people adore you. Doesn't it happen that they ask you for things? That you buy players, that you invest in Boedo's comeback, as you've already done?

No. Never. I'm not for that. What's good is that I can help with some things. Besides, there are many people who continue to fight to gradually return to the Avenida La Plata. And, obviously, I am in favor of their efforts for the repatriation. But although we must not forget the place we came from, we must not belittle the place at which we've arrived.

For that reason, the new chapel in Ciudad Deportiva.

It can be, although that has a lot to do with world-wide evangelization. That's my thing. Those who care to listen to me are welcome to. I always try to make fans everywhere. And we want those who come to the chapel to do it regardless of the God they have. They should just feel good and feel the colors.

You are Catholic, but do you go to mass?

Very little. On occasions like this, but I like to be connected in some way with religion; I believe it's important. In fact, I asked permission several times to let me put a crow in the chapel that was created by a North American artist, which could be taken as a symbol of the pre-Christian era, somewhat heretical. But it needs to be taken with a sense of humor.

But San Lorenzo is almost like a religion with you.

That's what it is. San Lorenzo is a religion.

That´s the point: Viggo is trying to convince others that a positive outlook is the best thing in any contingency. Apart from the analysis of the terrible campaign by San Lorenzo in this Clausura [a tournament], he is always keeping an eye out so the flock of cuervos doesn´t disband. Even from his website (www.percevalpress.com) where he defended Migliore when the supporters criticised him because he attends Boca matches as the fan he is. "Don´t be such intolerant jerks! We Cuervos are better than to punish a player because he goes to see a soccer match! And Migliore doesn´t need to explain himself," he harangued from his web platform.

On that very site, he is already working to begin assuming the physique du role in his new film enterprise, the life of Sigmund Freud, which will be called The Talking Cure and which will be directed by his friend David Cronenberg. At percevalpress.com, Viggo uploaded the profiles of first class soccer players, including, of course, some from San Lorenzo (among them that of Mirko Saric on the recent anniversary of his demise). Hence the thick beard ("I portray Freud when he was younger than in the image we all know; at that stage he was already quite sick."), which gives us the chance to consult him about whether San Lorenzo is a case for the couch: "I don´t think so. The team has had very bad luck, but has very capable players. Regardless of everything, it is a still a great honor to be a cuervo."
Top of this page
Last edited: 10 July 2010 13:24:25