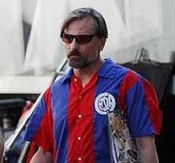 Hollywood and soccer world cup in Vienna. Viggo Mortensen (52), superstar from Lord of the Rings combined both mega-events on himself at the beginning of shooting yesterday morning at Viennese Berggasse: wearing the cool soccer jersey of the Argentinian soccer team Club Atlético San Lorenzo de Almagro when he arrived for the shoot.

The secret script with his daily duties he had hidden in a file covered all over with Panini soccer stickers. A fan from the book. With his red and blue jersey, Mortensen proved himself a true aficionado: the soccer underdogs from Buenos Aires (nickname: El Ciclón - the cyclone) are said to be the team with the greatest tradition in all of South America. Bizarre: He even adorned his trailer on set with fan jerseys and flags.

Mortensen, the Argentina fan - a fact, that will more than pay for him in Vienna. Until Friday, he will be in front of the camera as Sigmund Freud at Berggasse, near the university and at castle Belvedere. The next match of Argentina (vs. Germany) will take place on Saturday. "I don't know for sure yet where I will watch it. But during my last stay in Vienna at the beginning of the year, I discovered a few nice locations for it," he confesses to Österreich-Talk.

Next to Mortensen, who was only shooting interior scenes in "his" Freud house yesterday, star director David Cronenberg (The Fly) also got Inglouroius Basterds newcomer Michael Fassbender and Canadian newcomer Sarah Gadon (Nikita) in front of the camera in Vienna. Clad with typical 1920s clothing [sic], they drove to the joy of dozens of sightseers in a Fiaker carriage around Berggasse for hours. At least then Vienna became Hollywood.
Top of this page
Last edited: 3 July 2010 10:04:45