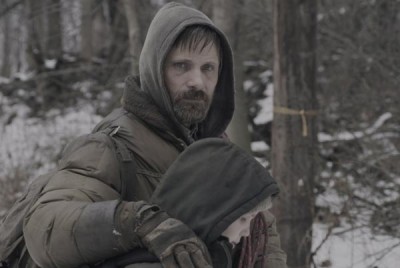 Image Macall Polay.
© 2929/Dimension Films.
If there were such a thing as a typical movie star, Viggo Mortensen wouldn't be it. The star of The Road, which opens Wednesday, is never in the gossip columns, he spends his free time in Idaho, and in the eight years since the Lord of the Rings movies made him a bankable commodity, he's released more books of art and poetry than movies. He speaks at least six languages. He's never done a comedy.

The first time I met Mortensen, I didn't know who he was. Twenty years ago, the apprentice actor was sitting silently beside the woman I was interviewing, his then-wife Exene Cervenka of the punk band X, while she breast-fed their newborn son Henry.

When I spoke to Mortensen by phone earlier this month, he remembered the occasion. "That was at Elektra Records on Sunset Boulevard, right?"

I told him I had been impressed by the strength of the family bond, a theme that underlies The Road, a Cormac McCarthy story about a father and son trekking through a wasteland after an unspecified disaster.

Mortensen said that he and Cervenka, who recently relocated from Jefferson City back to Los Angeles, remain close a decade after their divorce and share custody of Henry.

"We take good care of each other," he said. "My relationship with my son, my ex-wife, my father, my grandfather -- all those things came into play when I did this movie. Kodi (Smit-McPhee), who plays my son, reminded me a lot of my son -- our son -- at age 11. And of myself, too."

Mortensen has spent much of his life on the road. Although he was born in New York City in 1958, after his parents' divorce he lived in his father's native Denmark, and in Argentina, where Viggo Sr. ran poultry farms. The actor, who lost considerable weight and sought survival advice from homeless people to prepare for the role in The Road, travels light.

"When you take away your possessions," Mortensen says, "what are you made of? This movie lets people ask the age-old questions: Why are we here? What is the most important thing? Is it kindness? Is it just staying alive?

"The things that the wife in the movie is feeling -- pain at the absence of humanity and culture, which makes you feel that there's no point in going on -- is actually the source of all that humanity and culture. It resides in that very struggle. When you strip everything away, survival brings you face to face with your strengths and weaknesses, your ability to behave in a loving manner in the most dire circumstances."

Mortensen, an opponent of America's overseas entanglements, cautions that The Road is not a message movie about the consequences of war.

"You'd have to be completely blind or bereft of common sense not to be concerned about where the world was headed," he said. "But this isn't an exercise in what-if. There are already millions of people who survive one day at a time, and environments that look like they've been bombed."

The Road was mostly filmed in the strip-mining regions of western Pennsylvania, with a detour to the denuded forests below the Mount St. Helens volcano in Washington.

When I ask him where he'd like to be if the end was near, Mortensen briefly waxes poetic.

"My first impulse is to say I want to be in nature," Mortensen says. "By the sea, on a mountain, in the woods. But on second thought, it doesn't really matter where you are -- it's how you are. We forget what's important, because we're in this drive to keep our jobs, or be good parents, or acquire certain possessions.

"But all it takes is an illness or a terrorist attack or a hurricane to bring you back down to earth. And you realize: It's good to be alive, it's worthwhile being kind.