One Does Not Simply Use Aragorn for Spanish Far-Right Propaganda

It wasn’t so long ago that Benito Mussolini’s granddaughter was squaring off with actor Jim Carrey over his sketches of her dead, fascist grandpa. Now, it’s Viggo Mortensen's turn 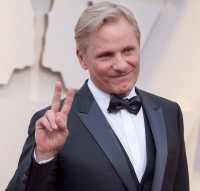 It wasn't so long ago that Benito Mussolini's granddaughter was squaring off with actor Jim Carrey over his sketches of her dead, fascist grandpa. Now, it's Viggo Mortensen's turn. He's famous for playing Aragorn in the "Lord of the Rings" trilogy — and apparently now the platform of Spain's nationalist Vox party.

Last week, Vox tweeted an image of Aragorn with the Spanish flag and the party's emblem on his cloak. He was standing with his sword drawn before a horde of the party's enemies: leftist, LGBTQ, and feminist groups. The tweet was captioned with the text: "Let the battle begin! #ForSpain."

Vox's platform is nationalist and gives a special place of pride to the Spanish flag. Its leaders vow to essentially "make Spain great again" — and want to abolish laws on gender violence and repeatedly wage other attacks on women's and LGBTQ rights.

Mortensen, who lives with his wife in Madrid, was not pleased with his most iconic character being used for far-right propaganda purposes. He was perhaps even angrier than Aragorn was when Boromir died — so mad, in fact, that he drew a weapon mightier than the sword.

"One must be quite ignorant to think that the use of Aragorn's character in the film trilogy 'The Lord of the Rings' to promote the electoral campaign of a xenophobic right-wing party like Vox would be a good idea," Mortensen wrote in a Tuesday letter to the Spanish newspaper El País.

He continued: "It is even more ridiculous to use the character of Aragorn, a polyglot statesman who advocates knowledge and inclusion of the various races, customs, and languages of Middle-earth, to legitimize an anti-immigrant, anti-feminist and Islamophobic political group. I would laugh at this clumsiness, but Vox has entered the Congress with 24 seats. It is not a joke, and we must be attentive and proactive, as is Aragorn in the Tolkien saga."

Mortensen is correct: Vox saw a decent political surge in Spain's election. In 2016, the party gathered just 0.2% of the vote. In the last election, that jumped to 10.3%. Before then, Spain had, in a relative sense, avoided the resurgence of far-right mainstream politics seen in other parts of Europe.