"In the coming year, I will fulfill the dream of making a movie in Argentina."

By Leonardo Ibánez - translated by Ollie, Rio, Sage and Zooey 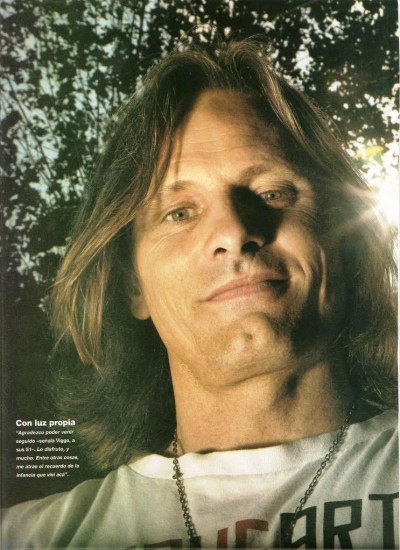 Image AFP y Distribution Company.
© Gente.
Yes, he has finally hit upon the book that captivates him and, in an exclusive, announces that in 2011, he will film his first movie in our country. Moreover, he promotes his participation in The Road, celebrates the Oscar for El secreto de sus ojos and anticipates that perhaps he will take part in Hobbit #2, one of the prequels to The Lord of the Rings.

"So-so..." he answers by way of greeting as soon as we ask him "How´s it going?" "Imagine, to see San Lorenzo among the last ones on the chart. It hurts. By the way, you supported Boca, didn't you?," he frowns, recalling the journalist from some old articles. We confirm it. "OK" - he proceeds -"After a decade of celebrations, now you begin to realize how you suffer when the results are not there, don't you?" He's spot on, revealing a passion for El Ciclón that becomes unmanageable for him and sets aside his status as a established and in demand star around the globe, the range of his artistic talents - which go beyond acting and foray into photography, music, painting and arts, - and even his one objective on accepting the interview, to talk about The Road, the film that will premiere in Argentina on Thursday, April 29 [sic] and in which Viggo Peter Mortensen (51, Manhattan native) is simply "the man", just like Kodi Smit-McPhee is "the boy", Charlize Theron, "the woman" and Robert Duvall, "the old man."

Let's avoid the two established stars. Is it true that you participated in the casting that chose the boy that played your son?

I offered to give my opinion, and then when John called me, I travelled from New Mexico to Los Angeles to read with the ones selected. There were two Americans, one Canadian and an Australian. The four, they were special. However, the look in Kodi's eyes, the Australian, showed an incredible maturity. Once chosen, though, we worried about how much he could endure. Take into account that we were talking about a horrific setting. No one knows why or by whom but the world changed from a cataclysm that left it without sun, energy, vegetation, food and almost without people, and loaded with ash, pain, drama and selfishness. We would be working in settings of intense cold (the locations included the states of Pennsylvania, Oregon, Washington and Louisiana) and we needed to look as if we were starving, exhausted and dirty. And Kodi endured it. The maturity of his expression extended to his body. In soccer jargon, he lasted the 90 minutes.

During the film you deliver the terrifying line: I will kill anyone who touches you. That's my job! Did you look for inspiration in Henry, your son (from the relationship of Mortensen and punk singer Exene Cervenka)?

Sure. The love of a father for his son is unconditional, sometimes brutally unconditional. To the extent that, at times, the son restores his father's humanity. I managed to have Henry (22) and Kodi (13) meet each other in New York and they became good friends. I am proud of The Road. I believe this is a story of adventure, horror, human endurance and love.

And your opportunity to appear once more in a different role, recycling body and soul...

Sorry, aside from flattering your physical mutability in each production, let's agree that in walking The Road, a couple of scenes appear that show your naked butt without inhibitions. Do you agree?

(He laughs ) If the book requires it, I comply. It happens that the good stories, the different stories, allow you to find good roles, different roles. For example, David Cronenberg just asked me to play Sigmund Freud in The Talking Cure, a wonderful story by Christopher Hampton, and I couldn't refuse.

While we're exploring "wonderful stories", is it possible that you might be added to the cast of The Hobbit, the prequel to The Lord of the Rings, to be released in 2011?

No, although if they would phone me for the second, which will come in 2012, I might. I have wonderful anecdotes from the filming of that trilogy in New Zealand.

By the way, do you still have a dream of filming in Argentina?

You want a scoop?

Get this: In the coming year I will put myself in the hands of Ana Piterbarg, of Buenos Aires, in Todos tenemos un plan, which earned the V Premio de Guión Julio Alejandro (the fifth annual Julio Alejandro award for a dedicated full-length film script) in the Festival de Málaga, por la Fundación Autor y la Sociedad General de Autores y Editores (the Málaga film festival,for the Authors' Foundation and the Society for Authors and Editors).

Of course. In the cinema, and I loved it. My congratulations to Juan José Campanella for his Oscar and for the great acting he produced. I like the level Ricardo Darín is showing on the big screen and in the theatre.

And since we are speaking about taste, did you hear that in Spain you´ve been emotionally connected to your colleagues, the singer Christina Rosenvinge and Ariadna Gil?

Col-leagues, exactly. Anyway I think that cultivating privacy consists in not rectifying the incorrect information spread about yourself.

It just so happens that Rosenvinge´s children were found wearing red and blue gear.

True (roaring with laughter). Thanks for the interview, bosterito...