Viggo Mortensen - "Above all, I'm a Cuervo... And a greater pride does not exist"

By Eduardo Bejuk - translated by Ollie, Rio and Zooey

Source: Gente
The actor passed through Buenos Aires and, as usual, the visit centered around his greatest passion: his beloved San Lorenzo. He donated a chapel for the club, went to the field and suffered with the defeat. While he prepares to personify Sigmund Freud on film, it remains clear that his madness for El Ciclón knows no bounds. 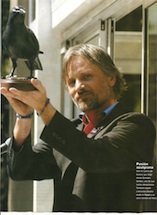 © atlantida.
He speaks porteño. And his neutral accent, New Yorker-Danish-Spanish, magically vanishes. He likes to sit in bars to listen, and he would love to go unnoticed as the least known of the regulars. But he almost never does. He seeks images, constantly, or images find him. And then, Viggo Mortensen (51) takes out his professional camera and photographs at ease. He always has it ready, just in case. It could be a landscape, like when he went about the north of Argentina; it could be someone who catches his attention...

Viggo is a seeker, a lover of poetry (he edited a national anthology last year), good food, talking and Argentinean writers. And nostalgic for that past that drags him back to his childhood, where he wasn´t a celebrity or a movie star. He simply was a pibe born in New York who through one of those quirks of fate had ended up in Argentina. And one afternoon, he would go away, further than he could have imagined, but then always return.

Viggo in Buenos Aires. Always ready to walk through the streets that left their imprint on him, and to promote his new film. And, of course, with the irresistible urge to mix with the tribe, in the congregation, in the collective feeling that erases every trace of his celebrity: his Cuervo status. For those who aren't familiar with soccer lingo, the Cuervos are the fans of San Lorenzo de Almagro, the team that captivated Mortensen in his porteño childhood and that he has turned into his indelible DNI. [translator's note: national ID]

No matter how much you try, no matter how versatile Viggo may be (actor, writer, painter, book publisher, photographer), it seems impossible to describe a visit of his without mentioning San Lorenzo. Even more so when his reappearance in the country includes the inauguration of a chapel, located in the very same Ciudad Deportiva as the club, a building donated by the actor himself, who took care of the smallest details of the undertaking. Most of the time Viggo lives in Spain. And in airplanes. When he is not filming, he is busy with his publishing house (Perceval Press, a quixotic undertaking that permits him to publish books few would publish). And when he can really do what he likes, he simply talks, thinks, dreams and reflects on San Lorenzo. Inevitable.

He arrived in time for the 102nd birthday of the club, on Holy Thursday, fulfilling one of his dreams: to inaugurate a chapel a few meters from the field. It was his gift (one of many), out of his own pocket, one more irrefutable proof of his love/madness/fanaticism for the colors blue and red. For many, an exaggeration, a mystery, a disproportionate devotion. For others, a distinctive hallmark of his Argentinianism and a proof that genuine love, loyal and eternal, finds in soccer a beautiful excuse for expressing itself. Viggo is the anti-star, almost like any other member of the crowd. A reserved type and light years away from any ostentation about money or power.

Thursday, after the speech for the opening of the chapel, he presented his relic: a bronze crow, a unique piece, life-sized, that he'd acquired in New Mexico a couple of years ago. He saw it while filming a modern western with his friend Ed Harris. He bought it, put a plaque on it with the Ciclón logo and presented it before fans and admirers. Those who adore him and see him as a kind of Chosen One, the Aragorn who will free the people (San Lorenzo) from their numerous sorrows, who will fulfill utopias and dreams and who will not be stopped by Sauron himself in all his dark power. Until the world championship is achieved, Viggo, brandishing his invincible sword, will not cease his quest. And they believe him. And follow him. "Above all, I'm a Cuervo... And a greater pride does not exist", says Viggo, citizen of the world, adventurer even at 51 years. "I would like to live in Argentina some day, maybe in Boedo", he added.

"I'm going to play Sigmund Freud in an upcoming film", he said after the ceremony, in the middle of a welcome lunch. They brought him to Suárez, a restaurant in Boedo where Cuervos often get together. The Talking Cure will be his third film with director David Cronenberg, with whom he has already worked in A History of Violence and Eastern Promises (which earned him his first Oscar nomination). Meanwhile, we await the opening in Argentina of The Road, an intense film in which he will be seen in a complex role played out in an apocalyptic setting.

Between Wednesday and Monday, which was the duration of his stay, he visited friends (including some outside the capital), dealt with the press, watched San Lorenzo on the field (they lost 0-1 against Gimnasia), dined with some of his idols (Sergio Sapo Villar, the man who won the most games in the history of... yes, San Lorenzo de Almagro) and promised to return soon. On the wings of the Cuervo, as always. 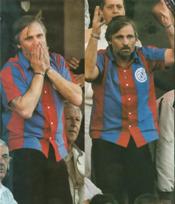 "When I am not in Argentina, I watch all of the games on the computer over the Internet. And I always have a jersey on hand."

In the stands, Viggo couldn't enjoy his team. On the contrary, he watched the defeat against Gimnasia and the resignation of the Cholo Simeone. Another time, maybe...

"When I filmed Eastern Promises, I used the opportunity to tattoo a crow on one arm; it tied in with the character, so I didn't have any doubts about it."

Lord of the Cuervos

In spite of the bad moment for San Lorenzo (it is among the lowest in rankings and lost again on Saturday), Mortensen enjoyed a few moments of the afternoon. He crossed the playing field before the game, flag in hand, and greeted all the fans that approached him.
Top of this page
Last edited: 20 April 2010 10:19:07