An Action Star With Argentinean Roots

By Diego Lerer - translated by Patricia

Source: Clarin
He's a San Lorenzo fan, drinks sugarless mate and makes homemade caramel milk. Meet the hero from The Lord of the Rings, a Buenos Aires man of pure... Nordic breed, who was born in New York but lived his childhood in Argentina. 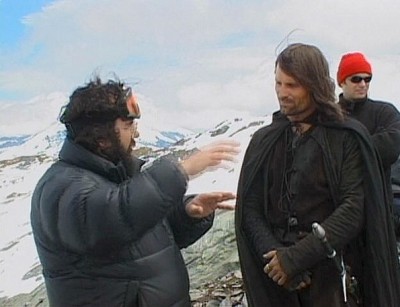 © New Line Productions Inc.
It's past 2am in Buenos Aires when the telephone rings. On the other end of the line, a very Argentinean voice asks: "Do you still have those football player figurines?"

Viggo Mortensen is in Los Angeles, the same day that The Two Towers, the second instalment in the Lord of the Rings trilogy, is having its US premiere. He's been talking for almost two hours with Clarin, but he seems little concerned with the epic deeds of his character, the heroic Aragorn. His concern right now lies with much more mundane matters. "Do you remember that game where you had to throw the figurines against the wall and you won the one that fell nearest to you?" he asks. "What was it called? It wasn't chupi, was it?"

Viggo doesn't seem to be in a hurry (after all, in California it's five hours less) and the interview already seems more like a chat with some compatriot who lives abroad and hasn't come back in many years than with a celebrity who stars in the most eagerly awaited film of the year. And it's because, despite the Nordic name, the actor has a long relationship with Argentina: the son of a Dane and an American, Viggo was born in New York, but he lived here from the age of two until he was eleven.

Among the Argentinean customs Viggo keeps are, obviously, drinking mate. "I drink it all the time. Rosamonte or sometimes Taragui. Unsweetened, of course. And I make homemade caramel milk. Here in Los Angeles you can buy many things, like empanadas, quince, yerba (he says this pronouncing all the "ll" and "y" in Argentinean fashion.) I have this Italian place nearby where they sell these things."

Do you get nostalgic?

About some things. I listen to old tango, I have a pretty good collection. Do you know Ada Falcon?

Yes, she died recently. They're making a movie about her...

Really? I didn't know. In truth, I thought she had died a long time ago. I listen to tango and some of the newer music. I also play some football. There's a park near to where I live where Mexicans and Salvadoreans get together to play. I know there's a league in which Argentineans play. I'm a San Lorenzo fan, I follow the results, everything.

Are you from Boedo?

No, I was from downtown. I don't really remember how it was that I became a San Lorenzo fan, but I would walk around all day with the t-shirt on.

Do you follow the news about what happens in the country?

I don't really have any Argentinean friends nor close contact with the country. I don't have family there and my roots are few. I find out about news and it really bothers me what's going on, makes me feel sorry. But in order to know the reality, you don't have to read the American media.

Do you have any strong memories about the country?

I remember stuff from when I was little. The barbecues, some streets, neighbourhoods. When I went back there a few years ago, I spent my time wandering.

In spite of all this time, you still have a Buenos Aires accent...

That's what they say. It probably stuck. But I'm losing vocabulary because the Spanish that I get to listen to here is different.

His Argentinean side is not Mortensen's only peculiar characteristic. At 44, he raises by himself his 14-year-old son (Henry), born of his relationship with Exene Cervenka, who was the lead singer of the seminal punk rock band X. Now divorced, Viggo has been seen in the company of Lola Schnabel, the 22-year-old daughter of the artist Julian Schnabel. Besides acting, Viggo paints (very well), he take photographs (even better), sings and plays music with his band (a bit out of tune, frankly) and writes poetry, many of it in Spanish (see Chaco and other poems.) His friends characterize him so: "He never stops."

This daring quote, the constant discovery, had a lot to do with his accepting the role of Aragorn in Peter Jackson's saga. Despite a long cinematic career, Viggo hadn't been the actor originally chosen for the part, but was instead called in a hurry, with the filming already underway, when the Irish actor Stuart Townsend quit.

"I had to make the decision that very day," he says. "I had to accept leaving for a year and a half in New Zealand, leaving my son. I told them, 'let me think about it.' So they gave me a couple more hours. I called Henry and I told him, he knew a lot about the Lord of the Rings, I knew very little. 'What role is it?' he asked me. I said: 'Aragorn.' 'Ah, that is a great character! You have to do it!' he answered. He was 11 then, he's 14 now."

It was an offer you couldn't refuse...

But I did have to think about it. The impression I had was that it was a challenge and, if I didn't take it on, I would regret it. I didn't think 'it's a big movie.' Back then nobody knew if it was going to be a commercial success. But I thought it was an important thing. I'm happy that I accepted.

Did you start studying Tolkien, the author, right there and then?

I took the book with me on the plane. I started to get interested in things about the saga and in the differences between Aragorn and other heroes.

Heroes, in general, do all these brave things and then they talk and sing about their deeds. He tends to do things, keeps quiet and leaves. He's like the Lone Ranger. In the movie more so than in the book. He has more and more responsibility because the enemy is so much bigger.

Perhaps due to the inherent characteristics of the adventure genre, the film version of the Lord of the Rings rests more and more on the Aragorn character: the battle at Helm's Deep, a mere chapter in the novel, extends in the movie for almost an hour, and the same happens to the hero's romance with Arwen the Elf maiden, barely sketched by Tolkien. After watching The Two Towers one gets the impression that, even if Frodo carries the weight of the Ring, Aragorn carries on his shoulders the weight of the narrative. And Mortensen, with his Nordic and sombre sternness, with his bewildering and dense heroism, strikes the right note for the role.

"When I read the book I realised that it was based in a mixture of many sources, from the Nordic mythology, many things I had read as a kid. Even Martin Fierro. It's a book from which a lot of good things could be extracted. In the first [movie] I got the impression that Jackson had managed to be faithful to the book and show his own vision. The second movie is a more free interpretation."

Not so much. I have memories of having read the Brothers Grimm when I was living in Argentina. And I liked Doctor Zhivago and Lawrence of Arabia.

He would allow us to do some things, but always within his own vision. I didn't really know how everything was going to turn out. The day-to-day was a bit chaotic. He seems to be a man with a great deal of confidence in himself and he enjoys doing this. But what he likes most is the post-production. He did a lot of things there. The first movie really surprised me: the stuff he took out and what he put in. And the second, even more. There are sections that are not there or that he's put somewhere else. So I have no fucking idea how the third one is going to turn out.

It's well-known that you had to do reshoots. Can you tell me which ones there were and why?

We went back this year to fix some things that Peter wanted. And he did other things besides. It's just that the first one was so successful that New Line gave him permission to spend a little more. I'm sure that next year we will go back to change stuff from the third one.

For those who haven't read the book: what can they expect in The Return of the King?

I know about the book and I know what we shot, but I wouldn't dare tell you anything because Peter always surprises me. He has said in public that the third one is his favourite and so has Elijah. I don't know what they base that on, but I hope it's true.

Alec Guinness was sick and tired that people only remembered him for Star Wars. Aren't you afraid of the same fate?

That's the way things are. About twelve years ago, I did a movie (The Indian Runner) directed by Sean Penn and there are a lot of people who only remember that one. And maybe it's going to be like that, but I have no control over it. I did what I could to do a good job and whatever happens after that doesn't depend on me anymore.

Do you notice the change now with people? The popularity, do fans chase you more?

There is a lady from Japan who's obsessed, who sends me like three letters every day, all of them very nice... Fame has brought me good things, like starring in Hidalgo (an ambitious western directed by Joe Johnston), which wouldn't have happened without the Lord of the Rings. But since I don't go out much, I don't really know what's going on out there. Yes, it's true that I get stopped more and people stare. But I don't mind signing autographs and all that. The problem is that sometimes you're just walking and you feel like scratching your balls and it's not funny to have people watching.