The Heart Of The End Of The World

By Julian Garcia - translated by Zooey 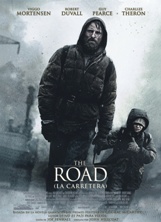 Movie Poster (Spain).
© Dimension Films/2929 Productions.
The Australian director John Hillcoat took on an almost irreponsible challenge: bringing to the screen Cormac McCarthy's masterful novel, The Road. The painful story of a father and son, surrounded by a barren landscape, who begin a journey toward the South in search of the sea, pushing a shopping cart in which they keep their few belongings. Hillcoat is little less than a hero, because the adaptation of The Road is magnificent. Respecting with devotion the extreme difficulty of the original work, the director is capable of conveying the loneliness, abandonment, despair and love that envelops the father and son on their moving journey through the heart of the end of the world. Viggo Mortensen - who last night received the the Premio Honorífico of the festival - plays the father in The Road - screened at the festival's closing ceremony - in one of the most extraordinary performances in memory. "I was afraid of failing, of not finding the courage to bare what's inside me as this story demanded," assured the enigmatic and fascinating actor in an impeccable Argentine accent.

Hillcoat, sitting at the same table as Mortensen, but not next to him (it appears their personal relationship is, let's say, a little difficult), wanted to also emphasize the great work of the boy, Kodi Smit-McPhee in the role of the son. "Kodi was a blessing. It took finding a boy able to transmit that wealth of such difficult emotions," said the director. Mortensen agreed with a nod and told an anecdote."Robert Duvall arrived at the shoot and asked, "Hey, where did they get this kid from; he's brilliant." Then we asked the boy how Duvall seemed to him and he answered: "The old guy is ok!" Read the episode with the voice and seductive charm of Mortensen and you'll understand why the audience burst into laughter and applause.

Asked about so many new movies about the end of the world, Mortensen, unrepentant soccer fan, declared: "The festival is over today, but not the world, nor the Argentine soccer team. The 2-1 yesterday over Peru has put me in a great mood." That indeed would be the apocalypse for the actor - the elimination of Argentina from the World Cup.