Art - Viggo the Artist and Publisher 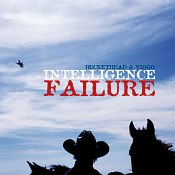 Intelligence Failure.
© TDRS.
Now if he just changes his handle to something catchy like "V-Go," the fellow might prove quite the pop star. - Gregory Weinkauf

"I think for him, to work with me, I'm obviously not, you know, a professional musician or a professional music producer or anything like that, so I don't work in a conventional way and I don't have set rules for how we are going to do each take or how long its going to be or what approach we are going to take, so I think it's probably refreshing for Buckethead to just go ahead and play. And be safe, he can be safe in making mistakes, doing whatever. I'm never going to make him do something and I would never use something he didn't like so I think its a safe atmosphere for him to be really creative."

"I met him like seven or eight years ago when I'd made a recording of...I'd participated in a poetry recording for children and each poet or writer had to invent something about a theme, well, from Greek mythology. I did something about Poseidon and he put it to music. I listened to the music afterward, when the recording was ready and I asked, "Who's the guitar player?" Then I called him and we began to work [together]."

Viggo talking about working with Buckethead
"La Ventana" with Viggo and Carme
By - transcribed by Ollie and translated by Ollie, Rio and Zoe
Cadena SER
23 November 2011

"Writing or acting or playing music, I need to feel like I'm connecting with something. And although acting brings me many moments like that I'm probably most relaxed sitting down at a piano. I don't read music and I've never had lessons but it's fun and I find it very relaxing. I'm okay with mistakes and people not liking what I play. I just do it."

A number of years ago I reviewed a collection of Mortensen's photographs and poems and commented on how with either media he seemed to have the innate ability to capture specific moments in time with both his words and his camera.

Maybe it's through his work as an actor, where you have to be in the moment at all times when you're portraying a character in order for it to be believable to your audience, that he has gained this ability.

However he does it, this recording shows he's equally capable of bringing an audience into a specific moment in time with his music. Acà is a beautiful and evocative collection of music which will allow you to travel into your own memories of time and place like few others I've heard.

.....from his various books to his spoken word recordings to his exhibitions, one can't fault Mortensen for a lack of creative ambition. One listen to The Other Parade, his rereleased 1998 album with Buckethead, ex-wife Exene Cervenka, and a host of others, reveals total artistic fearlessness (Mortensen plays a motorcycle muffler on every track). Its haunting, post-industrial abstractions make Einstürzende Neubauten sound like 'NSync -- and, if taken in the wrong mood, they may encourage a listener to beat on the disc itself. But there's absolutely no lack of energy and presence.

Holding Court with the King: Viggo Mortensen heralds the return of the renaissance man
by Gregory Weinkauf
East Bay Express, 2003

Taking lyrical cues from William Blake, Rumi, and Jonathan Swift (whose "Holyhead" gets murky, standout treatment), the album could almost be called the dissonant but similarly adventurous Sgt. Pepper of its age, or, more rationally, the My Life in the Bush of Ghosts.

"It is a tribute to the memory of the victims of the 11th September tragedy. I wrote the words, but I also used texts that I love very much, from Noam Chomsky, to whom the album is dedicated, and from Jonathan Swift. It's totally experimental. The Hobbits agreed to join me and it was a lot of fun, we improvised on the spot, we spent our time exchanging instruments. Elijah played the battery and the piano."

Now if he just changes his handle to something catchy like "V-Go," the fellow might prove quite the pop star.

On record, Mortensen's speaking voice--especially in Spanish--actually is more melodic and alluring than his singing. Confident and clear, he draws listeners in as he spins tales of deceit and humor.

On the Recent Forgeries CD
Sensitive Side of Psycho
by Jae-Ha Kim
Chicago Sun Times, 1998

Listening to Viggo Mortensen and Buckethead's renditions of Viggo's works on This That And The Other is to be brought back to the direct immediacy of art and to be given the opportunity to experience a creation firsthand from its creator.