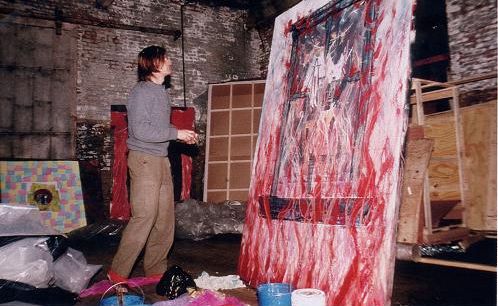 © Lindsay Brice.
"The connotation of celebrity art isn't very good," Mann says. "It implies dilettante. I wouldn't put Viggo in that context. He doesn't have to paint, that's not the point. I think he really needs to make art, really needs to." - Robert Mann, New York Gallerist

'According to my mother I never went anywhere as a child without a pencil, and I drew all the time. Recently she gave me a notebook with some of my old drawings. I especially noticed one I drew when I was 7 - it was rather wild. On the top it said: 'Little Red Riding Hood', and then there were a lot of oil colours mixed together, almost abstract. I really liked it. But across the drawing it said with a red pen - and underlined: VERY BAD! Some teachers still think that is motivating...'

Mortensen's paintings relate to his photography in the sense that they also teem with lived incidents. They are collages, brushings of materials, and words, all used, felt, and constantly touched. Redefined and restated, there is always something beneath, rubbed out, obliterated, nuanced; there is always more happening. Words from his poems, found phrases, or overheard whispers both succumb and survive as they enter the field of the work.

"The connotation of celebrity art isn't very good," Mann says. "It implies dilettante. I wouldn't put Viggo in that context. He doesn't have to paint, that's not the point. I think he really needs to make art, really needs to."

Robert Mann, New York Gallerist
In the Spotlight But Shining On Its Own - Celebrity Art
by Lisa Crawford Watson
Art Business News, 2001

"I have a tendency to always leave things for another day. Before I make the first mark on a canvas, it always ends up seeming much more urgent for me to have another cup of tea [laughter]. And then I only have 45 minutes left before some other appointment, so I've already made myself late to begin with..."

'I like to paint and I like glue. I like gel, you know? Acrylic gel. It's fun to play with that and see what that does. I mean, some of the things are things you're not supposed to mix; oil, acrylics, or water. I just like to get dirty and play with it and see what happens. It's just fun. Sometimes you get something interesting by accident by coating something with some thing you haven't tried coating with before. You just have a hunch that will do something to It will change the texture or alter it some how chemically in an interesting way and change the tone of it. I don't know. I don't have a reason really...'

"What I find with poetry or painting or even acting is that mistakes can often be helpful. In the brief time I've been making paintings, I've ruined a lot of them by not knowing when to stop. But you just put it aside, and later when you come back to it maybe you remove one thing, or add something else, and all of a sudden it works, where before you were ready to burn it. Or maybe you look at it and realize it doesn't need anything at all."

Viggo From 5 to 7
by Dennis Hopper
Flaunt magazine 1999

'My house has gradually, over the past year and half, turned into this work shed almost. I have moved the furniture aside and there's drop cloths [everywhere]. I just have boxes of these paint sticks and paint stuff so that, if I think of something, I can make it.'

Viggo Mortensen on painting at home
The Fire That Fuels an Artist's Heart
by Carnell
Carpe Noctem magazine #15, 1999

The house is like a giant compost pile that provides an inexhaustible supply of mulch, and when you see how Mortensen lives, you begin to understand how he produces so much art; it's as if he resides in a paintbox.

"In the canvases on which I have been working a while, there are phrases, maxims, extracts from personal diaries or newspapers ... I even use these as the material for my paintings, like the paint. These days I've stopped copying them, so as not to lose them, in notebooks or on the kitchen wall. However they are still there, in my paintings, like so many indications of my past points of view and my experiences ..."

"If I thank Saint Francis of Assisi in my book, "Hole in the Sun', it's for a private reason. I don't want to explain any these references - a word, a name or a quotation - which mark my work. Even if the reader does not know exactly why I wrote that, it won't stop them searching for a connection, interrogating themselves. I like that people draw their own conclusions. In life, it's the effort you make to try and understand which keeps you alive and open. It is more important to ask questions than to find answers."