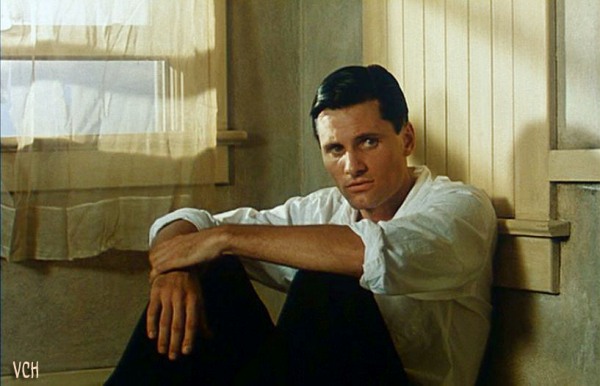 Courtesy of Viggo's Celluloid Haven.
© Miramax / Zenith.
Mortensen doesn't appear until an hour has passed - but when he does he immediately marks himself as one of those actors who doesn't need fancy lighting to be incandescent. - Martha Frankel June

His voice is such a growl that you find yourself leaning toward the screen to catch the words. His features are well defined but suggest a curious amalgam of Kirk Douglas' and Burt Lancaster's. His credits include Swing Shift, The Purple Rose of Cairo and Young Guns II, but his onscreen time is so limited that you still may not know who Viggo Mortensen is. In his latest film, The Reflecting Skin, British writer-director Philip Ridley's disturbing tale of repression and decay in the American heartland, Mortensen doesn't appear until an hour has passed - but when he does he immediately marks himself as one of those actors who doesn't need fancy lighting to be incandescent. Cast as a young man returning from the Pacific (where he dropped bombs on sleepy atolls), he displays surly, distant passion that's at odds, yet perfectly in step, with a small town that is seething beneath its bucolic veneer. Word is that he fires up the screen in Sean Penn's directorial debut, The Indian Runner, a film about a good brother and a bad brother that is due for release in September. It's not hard to figure out which brother Mortensen plays.

Mortensen also gets to shine in a smaller than expected role but one which is typically interesting of the actor. This is an early role for the actor but one which really begins to show the brilliant talent that would emerge post Lord of the Rings.