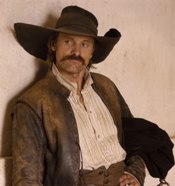 Viggo Mortensen continues to surprise. He is not only a great actor in English -- and a muse for Canadian filmmaker David Cronenberg -- but he can carry a Spanish film. Without dubbing. Mortensen is fluent in several languages and the historical adventure, Capitaine Alatriste, proves Spanish is among them.... As written in the original novel by Arturo Perez-Reverte, and as played with such robust conviction by Mortensen, our anti-hero is flawed yet worthy. Through him, we enter a period of European history rarely portrayed from a uniquely Spanish point-of-view. The film sheds the romanticism of costume dramas. Battle scenes are brutal and bloody. Regular life is dirty and desperate. Heroism is found in intimate human gestures -- and in Mortensen's soulful eyes.

You can certainly place me in the camp of those who had doubts that Viggo Mortensen could be a Spanish bushwhacker. And now you can take me right out of that camp and place me in the distant WOW-camp!! I have been wrong!!

Viggo Mortensen carried the role of Diego Alatriste y Tenorio to perfection. Right down to small but highly effective ways of expressing an emotion, Mortensen's portrayal of this 17th century Spanish soldier-turned-mercenary is his best work to date topping even his stellar performance in the 2004 release of Hidalgo.

Viggo, speaking vintage Castillian Spanish with his own voice, dominates the film as a kind of Medieval Clint Eastwood, short on words, long on deadly action when required...

Viggo Mortensen plays his character to perfection. He submerges himself in Alatriste and his terse, murmured and yet sonorous speech is that of one who knows words are extraneous when swords meet. His clear gaze, firm and serene, his calm, fluid gestures and that loyal spirit he has toward his comrades in arms, serve better than any narrative to tell the story of a man who knows irrevocably what his destiny will be, but still keeps hope alive for a future day when Spain will see better times and break free of the agonized struggles it is presently enmeshed in.

The riveting Viggo Mortensen is ideally cast as Alatriste, a noble soldier of very few words and very large actions....Mortensen is astonishing, channelling the very essence of Alatriste's fiery integrity.

New York-born Viggo Mortensen puts in a mesmerising performance as the swashbuckling hero, who enjoys carousing in low taverns with the likes of the mordant Spanish poet Francisco de Quevedo (Juan Echanove) as much as he does dispatching the foe on the battlefield. The American star delivers his own lines in Castilian Spanish, having lived as a child in Argentina and Venezuela, with a curiously more authentic accent than the slurred modern diction of the supporting cast (including Eduardo Noriego in a minor role).

One of the biggest surprises in the film is the competence and perfection with which Viggo Mortensen incarnates the main character.

Alatriste - A Review
by Uno translated for V-W by Paddy
Yahoo.es
1 September 2006

The entire tone of "Alatriste" is set to match Mortensen's harsh, brittle handsomeness.

...the tandem formed by Agustín Díaz Yanes and Viggo Mortensen anchors the movie and gives it splendour...Mortensen, whose odd accent is initially disconcerting and ends up being a perfect fit for his character's taciturn personality, has brought grit and mystery to the screen. Díaz Yanes has given him depth.

The young and bold director Agustín Díaz Yanes, reaches to equilibrate the necessary epic contents of the script with an intimate background, the spectacle of adventure films, with the emotional development of its charismatic main character, played by a very great Viggo Mortensen, who speaks a very slow Castillian, with a hoarse accent, which the character asked for.

The Spanish Golden Century Finds Its Movie
By Rosa Gronda - translated by Remolina
22 May 2007
Source: Litoral

Even when the love of his life, married actress Maria de Castro (Ariadna Gil) practically begs him to talk and let her know his feelings, Alatriste maintains a dignified silence, laden with 17th century testosterone. What a guy. Or more to the point, right now Alatriste out-guys all other guys in Western cinema (in Asia, his rivals are the boys in John Woo's "Red Cliff" series). Just seeing him stand there, his face half-obscured by a tattered black hat, his sculpted frame offset by a long cloak worn over the shoulders -- it's no wonder Maria looks as though she's ready for cardiac arrest every time he appears.