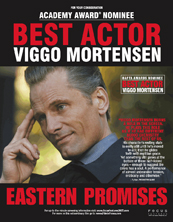 Mr. Mortensen was in Madrid to finish editing books for his small press, percevalpress.com, and he told the Baguette that all the talk today was about Mr. Bardem's nomination. "People are very happy about him here, and they're sort of happy about me being nominated," he said, as "a wayward adoptive son I suppose because I've done a few movies here and I've done a few movies in Spanish."

He found out about his nomination from turning on the television. "They were just announcing the main acting category but they kept repeating the supporting actor because it was Bardem, and they repeated it again and again," he laughed. "It was great!" But when they announced the lead actor nominations, they said his name just once, and he nearly missed it.....

...."It's nice to see people that you work with be happy, and it's nice to see your family be happy about something that's to some degree a crap shoot, obviously, but it's still is nice, you know, and if you don't usually get included in that stuff, and for reason I got lucky today, and I do acknowledge that and appreciate it."

"...It was nice to see Tommy Lee Jones in there. He hadn't been in so much of the mix and when I saw his name come up and there was only one name left to go, I thought, `Naah, well, there's no way (I'll be nominated).' So to be honest, I was quite surprised." -- Viggo Mortensen, on his best actor nomination for "Eastern Promises."

"It's always a bit bewildering when people are taking pictures and asking questions before the ceremony. I'm not very good at giving quick answers, and that's what they want. So I end up saying half a sentence, and then they go, 'OK, thank you!' and I'm thinking, 'WHAT did I just say?'"

Viggo on the Red Carpet
'My mother is very happy about it'
By Harriet Lane
The Guardian
February 22, 2008

If I could readjust my ratings on some of last year's reviews, I'd start with David Cronenberg's "Eastern Promises." I gave it only three stars though I would have gladly stayed in my seat for another showing. The best actor nomination for its star Viggo Mortensen made me happier than any other on Tuesday's ballots.

In the best actor category, no surprise that George Clooney, Daniel Day-Lewis and Johnny Depp were nominated. But the academy did itself proud by reaching out to Tommy Lee Jones ("In the Valley of Elah") and Viggo Mortensen ("Eastern Promises") for their powerful work.

"I'm realistic," Mortensen says. "I know I'm the odds-on favourite to remain seated throughout the ceremony."

Viggo after hid Oscar nomination
'My mother is very happy about it'
By Harriet Lane
The Guardian
February 22, 2008

"I'm the guy who never gets to go to the prom and now they've cancelled the prom," he said. "It could have been fun."

Fresh from the set of the post-apocalyptic film "The Road," Viggo Mortensen sized up the path to the Kodak Theatre entrance and smiled a grim smile. "This road is more daunting than the road in the movie I'm making -- and that one has cannibals."

Viggo at the Oscars
The Envelope
By Geoff Boucher and Chris Lee
February 24, 2008

"I feel probably like Eli Manning felt at the Super Bowl. Glad to be in the show, ready for anything." _ Viggo Mortensen, nominated for best actor in "Eastern Promises."

Viggo Mortensen scrubbed up for the big night. The best-actor nominee (Eastern Promises) prepped by taking "my annual bath. It was an arduous process of refilling the tub many times."

I know this might be a little "cliche" to say on this site, but honestly folks, how can anyone look at Viggo Mortensen's awesome beard and NOT want to build a hut in it?? I mean, even just for the summertimes, you know? Great man...even greater beard!!

Reaction to Viggo's 'Road' look at the Oscars
JoBlo.com
25 February 2008