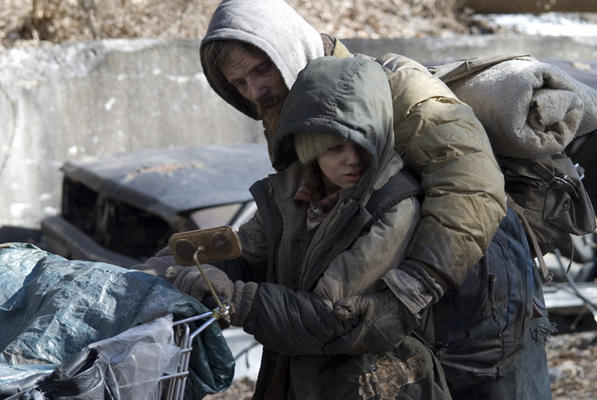 Image Macall Polay.
© 2929/Dimension Films/MGM.
As January dawns, reality bites and the seasonal blues come to stay, it is perhaps not the best time for the release of a post-apocalyptic drama set in a world so grim it freezes the marrow, but John Hillcoat's The Road is a film of such stark beauty and raw power it should be welcomed through the door any time.

Less a cautionary tale than a full blown eco-horror, The Road offers a glimpse of a terrible future. And it hurts. And depresses. It also amazes, inspires, and moves. Whatever else it does along the way, this is a film that demands a reaction.

Like No Country for Old Men, The Road comes from the dented (and recently auctioned for charity) Olivetti of Cormac McCarthy. The novel won a Pulitzer, and since the film has a major star in Viggo Mortensen (The Lord of The Rings, Eastern Promises), and a hot button theme in environmentalism, there has inevitably been speculation about other prizes. Plonk a few breadcrumbs on the path and we'll return to that point later.

Mortensen's character is called Man. His son, played by Kodi Smit-McPhee, is Boy. As with their names, the existence of man and boy has been reduced to the basics. A great firestorm, cause unspecified, has engulfed the overheated planet, turning almost everything in its path to dust. The sun has disappeared, snow and ice suffocate every surface, and those left to walk this wretched land do so in terror of where the next footstep might lead them. Any resemblance to current weather conditions in the UK is purely ironic.

Hillcoat, an Australian, once earned a crust making music videos. He showed himself to be made of deeper, still visually arresting, stuff with the prison drama Ghosts ... Of The Civil Dead and The Proposition, the Nick Cave-scripted western. Here, using images from the aftermath of Katrina and other wastelands, he creates a vision of an America so ravaged, so devoid of hope and humanity, it seems like madness that anyone would want to go on living in it. But therein lies the tale. The world might have gone to hell in an abandoned shopping cart, but there's a boy here who needs his father's protection. "I'll kill anyone who touches him," growls Mortensen's character. "Because that's my job." When all else has turned to ash, parental love remains aglow.

Boy and man are trudging towards "the south", where dad promises life will be better, or at least warmer. With all they own on their backs or in the trolley, they are a modern-day version of Steinbeck's Okies. For protection, other than the man's guile, there's a gun with just two bullets.

As becomes clear, the bullets are there to offer a way out for the boy and the man rather than to kill anything else. These two are gentle souls, "good guys" among savages. What the latter get up to is best left unsaid so as not to spoil the shock; enough to say that the chase scenes Hillcoat constructs are scarier than a January credit card bill.

These sequences are just one of the ways Hillcoat punctuates the trek. With a setting this alienating, a director has to work hard at keeping the audience engaged. When not scaring the bejesus out of them, Hillcoat brings on secondary characters with a tale to tell. Robert Duvall plays one such, Charlize Theron, in flashbacks, another. Playing the wife and mother, Theron doesn't have a lot of screen time, but she makes it count. Through her growing anguish we see how matters came to this terrible pass.

Hillcoat is at his best when making simple appeals to the most basic of emotions. In one scene the man has taken the boy to his old home. The walls are barely standing, almost everything is damaged, but when Mortensen returns a cushion to the sofa and sits down to watch the child playing with a toy it's like a poem to home and all its taken for granted comforts.

For all Hillcoat's efforts in keeping the story moving, The Road stands or falls on the relationship at its heart. Smit-McPhee veers between aching vulnerability and astonishing maturity, always looking to Mortensen as his guide. He is in safe hands, as is McCarthy's book. Mortensen's performance is of such extraordinary power it sweeps all along with it. Here is an individual meant to be half dead with grief and longing for a world that has vanished, yet he is clinging on to life with the ferocity of ten men. That quiet power of Mortensen's has never been more skilfully deployed.

Which leads us up the cul de sac that is speculation about the Oscars. Here, again, the timing could work against Hillcoat's film. Harsh and uncompromising have their supporters among Academy voters, but perhaps not this year. The glory of The Road is that it goes its own way, regardless.