"The end of the world is only the beginning"

Source: De Standaard
Viggo Mortensen on the adaptation of the book The Road that was considered unfilmable. 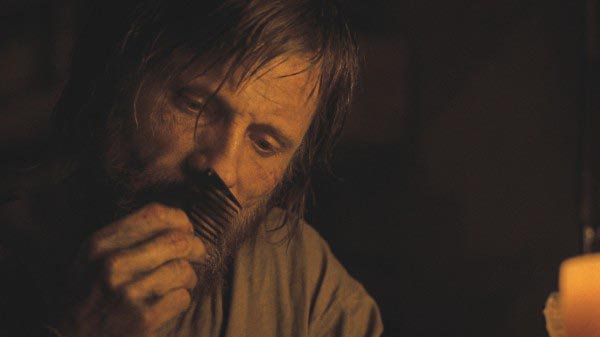 Image Macall Polay.
© 2929/Dimension Films.
Viggo Mortensen is always up for a new adventure, but the apocalyptic trip he had to take for The Road, is not one you would wish on anyone. "It really wasn't so much a physical challenge. I found it to be particularly difficult emotionally."

Witness by Peter Weir, The Portrait of a Lady by Jane Campion, The Indian Runner by Sean Penn, Carlito's Way by Brian De Palma: Viggo Mortensen (51) already had a respectable list of movies to his name when Peter Jackson asked him to play King Aragorn in Lord of the Rings.

Ever since that trilogy, it has become easier for him to get parts and show what he can really do. Take The Road, an adaptation of the novel, for which Cormac McCarthy (also known for No Country for Old Men) won the Pulitzer Prize. Mortensen plays a nameless father who wanders with his son through a desolate world, several years after an apocalypse. Finding something to eat without being eaten themselves is a concern every second of the day. The father has to prepare his son for a future life without him.

While it is dark and cold in the movie, the actor is warm and relaxed during interviews. "Are you from Belgium? Poor you. You don't stand a chance against Spain tomorrow," he predicted the day before the Red Devils lost 5-0. "Denmark has to play Portugal in soccer, but I think I'll focus on Argentina-Brazil. Right now Argentina could use all the help it can get."

This soccer discussion shows how Mortensen is more a global citizen than an American one. His mother is American, his father Danish. He was born in New York, but grew up in Venezuela and Argentina, and lived for a while in Denmark. The English, Spanish, French, and Elvish (invented by Tolkien) languages hold no secrets for him. "Where am I from? Everywhere and nowhere. I see that as positive. The more places I get to know the better.

My home is where I feel comfortable. Although, I am very loyal to some things. For example, supporting my soccer teams from Denmark or Argentina."

You look dreary and gaunt in The Road. I don't know if I want to know what you did to yourself to look so awful.

"It wasn't too bad. I lost weight, but don't ask me how many kilos. Just enough not to fit into my own clothes. I did it by eating less, but don't underestimate the power of visualization. If you really believe in what you do and you immerse yourself into your character, your posture and expressions adjust themselves. It is as if it is a chemical process. I experienced the same thing this time.

"It helped that we filmed in the winter - the cold is real - and in existing locations: in parts of New Orleans ravaged by hurricane Katrina, on the coast of Oregon, or in the desolate landscapes of Pennsylviania... That makes an impression, it helps your acting. The landscape became a character. Javier Aguirresarobe didn't add much light on purpose. We constantly waited to film until the sky was dark and grey enough - even if there wasn't a lot of time because of the short winter days.

"It really wasn't so much a physical challenge. I found it to be particularly difficult emotionally, because it concerns a deeply human subject."

Does The Road touch you twice as much because you are a father yourself?

"Of course that was the first connection. The book reminded me of the time when my son was the age of the boy in the book. However, I don't think you have to have kids to be affected. The Road is one of the most translated and acclaimed books by Cormac McCarthy, because it is universally appealing. Every culture, every nation recognizes the primary fear of parents who ask themselves what will happen with their kids when they are gone - especially when your child is barely six.

"My son is now 21, but when he visits and then has to drive 500 kilometres, I still can't help but caution him: Drive safely! Take breaks!

"Everyone hopes that his or her kids will manage. Will they be healthy? Have friends? Enough money to make ends meet? The story takes these questions to the extreme. The Road is not about the end of the world. That is just the setting, the beginning, a mechanism to focus those universal worries. The father knows his son will be killed and even eaten when he is gone."

But the boy does not always agree with the things the father does to survive.

"The father gives his son rules and values: we don't do this, we do that this way. Sometimes he breaks the rules himself and he tries to justify that later. It sometimes reminded me of countries who say that a little pollution should be possible 'because we can hardly ruin our economy.' I don't agree with that. You can just say no to pollution and look for economic actions that don't harm the environment."

What lead to the apocalypse in the story? An environmental disaster? The book makes no mention of the cause.

"The Road is not a political or ecological statement. McCarthy didn't name the cause of the apocalypse because that's not what he wants to talk about. If a prophet on the side of the road says that we could have known, then that is a vague assumption. It just suggests that it will end badly if we continue the wars and pollution. The industrialized nations don't want to hurt their economies, and the developing nations that are working on catching up demand the right to do everything the other nations did. Like polluting. They argue that they have the same rights to cars, dishwashers, or a mining industry. If it ends badly we should have known as well."

The Road is not just a beloved book, it was also called unfilmable. And still you started it.

"I had my doubts. How do you visualize the grey world? How do you honor the special relationship between father and son? Where do we find a young actor who has the emotional requirements of the character? But the performance by Kodi Smit-McPhee is overwhelming. You really should interview him. Without him we did not have a good film."

Why was the most horrible scene from the book - with the dead baby - not in the movie?

"Film and literature are different media. The reader can lean back and give himself some time, the viewer cannot. Images can be so strong that they overshadow the rest. We filmed the scene, but it was not essential. We address the lack of food and cannibalism in the movie anyway."

Cormac McCarthy rarely gives interviews and is supposedly a loner. You spoke with the man. What impression did he give you?

"I spoke to him on the phone at first. I had a book full of notes and questions on my lap. We talked for a long time, but only about his son and mine. Suddenly it seemed like there was nothing left to ask. I was allowed to call back if I had more questions about the book or the script. Later he also visited the set."

After Lord of the Rings you were suddenly a famous actor and you have been able to make a name for yourself with more powerful movies.

"I am picky, but also leave a lot to fate. You can't always get your way. Sometimes I just need to work and do what I can.

"Scripts with The Road's quality don't land on my desk every day. You could accuse me of letting my preference for new experiences guide me. I have never played a man like the father in The Road: on the surface, he barely reveals emotions, but inside he is consumed by deep emotions like regret, sadness, and despair. Concern for his son keeps him going. Without that child he would have been dead a long time ago."

We often see you in movies with a make-believe universe. Is that also a recurring theme in your career?

"Every movie is about a non-existing world. Movies show the world as it could or should be. Granted, sometimes a movie is just like reality, but even documentaries carry the mark of the director. As I just said: I don't look for anything, I see what comes my way, and if the opportunity arises to do something different, I usually go for it. Parts that scare me a little usually have the advantage."