Source: Fandango
An unflinching examination of human endurance, this faithful adaptation of Cormac McCarthy's best-selling and Pulitzer Prize-winning novel, The Road, brings audiences a chilling love story of humanity and survival between a father and son. The post-apocalyptic tale stars Academy Award-nominee Viggo Mortensen, who plays a father whose mission is to journey to the coast in hopes of finding safety and warmth. Read on as Viggo Mortensen talks about the making of the movie, Oscar buzz, and co-star Charlize Theron and Kodi Smit-McPhee. 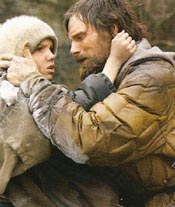 Image Macall Polay.
© 2929/Dimension Films/MGM.
Which came first, the script or the book? And what were your initial thoughts when you heard about the role?

Mortensen: I read the book the same day that I read the script. I thought it was a great script, a tough story, but beautiful. It was strangely uplifting at the end. After reading the script I didn't [realize] how emotionally condemned I would feel - I was worthless after that. [Laughs] I was at my mother's house and she asked what I wanted to eat for dinner and I said "how can I eat now."

I was reluctant, and maybe that's what (director) John Hillcoat is referring to. I initially said, "I don't think so." I said to my agent, "I'm really worn out. I won't be focused." And then, I looked at the story and thought, "Being worn out works." But, not so much, really. It does and it doesn't. You can't manipulate it, bring some research to bear on it, or force anything. You have to really be honest about how you feel.

How did you prepare for the role and did you have any concerns going into the project?

Mortensen: Well, my first worry when I said yes, which is always what happens to some degree, you say yes, you feel fortunate that you got offered this role, and then you think "oh, no, how am I going to do this?" In this case, more than usual. When I spoke with the director, I knew he was going to do things right, as far as the locations, actors, crews, but I felt like I had a burden that I had not had before on an emotional level, this turbulence under the surface, of how I was going to make this believable.

What made me more worried was that I was so dependent on whoever played the boy. I said to the director, if we don't find this genius kid to do the part than we can only do so much - the movie can only reach a certain level. Regardless of how well it is designed and how hard I work or am able to be honest emotionally, we would have been limited. We were really lucky to have found him because he was able to give everything he had.

Tell us about your phone conversation with Cormac McCarthy.

Mortensen: I just talked with him once before shooting, on the phone. We had a relatively long conversation. He just talked about his kid and my kid, and being dads. I had tons of notes ready to ask him about and a pen, and I was ready to really pick his brain. At the end of the conversation, he asked me, "Well, do you have any specifics about the book?" He hadn't read the script and he didn't want to read the script, which was unusual for a writer. He just said, "It's a different medium. You guys do your thing. But, if you want to talk about the book, is there anything you want to ask? Do you have any questions?"

I looked and I had 50,000 post-it notes in the book, and not one but two pens, in case it ran out of ink. I was ready. And I said, "No, I don't, really," 'cause I realized that conversation we had was all I needed to get going. There was something universal about this adult and this child that anybody can understand. I think that's why this book has had such a reach, more than any other, even No Country For Old Men, with its Oscar success. Because this book is so heartfelt and so free of any gimmickry, it just transcends cultures and languages.

It's a very successful book, and a lot of people around the world are looking forward to seeing the movie, which makes me hopeful, even though it's a daunting, difficult film.

What were some of the challenges faced during shooting?

Mortensen: The fact that I was a lot thinner, with not much body fat at all meant that I got tired more quickly in the cold weather. It was about trying to stay focused and get through the day, but it wasn't as hard as the emotional things, although that became easier as my relationship with him [Kodi Smit-McPhee] became stronger. By the end we felt like we could do anything. It's a great feeling to have an acting partner like that.

In the midst of such intensity was there anything fun about filming?

Mortensen: I mean one great thing about [Kodi] is that he is a prankster. He's a kid. He's a well adjusted kid so as much as he can channel intense emotions, he's a goofball. He would run around all the time making fun of people and that helped us a lot.

The crew was so into the story. It was more than a job and that doesn't happen often. I remember that being the case in Lord of the Rings, but in this case, you saw copies of the book and everyone was really excited because everything was so close to the book. We felt that support. It's like playing on your home field, you know that there is this unspoken force that helps you do better.

I remember talking to the crew members and they would talk about their sons and their dads. You don't have to be a parent to understand or care about the story, or play the part but it certainly helped me to begin with since I have a son.

Did you use your relationship with your son as inspiration?

Mortensen: Initially, when I started to do the movie, I thought about my son quite a bit, and that transition that he also made in his pre-adolescence, way before adolescence. He reminded me of Kodi a lot, and the character in the movie, in that he was wise beyond his years.

With all of the talk of Oscar nominations for this film, what does that mean to you?

Mortensen: It's not an easy thing. [The Road] is very much a word-of-mouth movie, and there's no better word-of-mouth than reading in the newspaper, "Nominated for Best Picture, or Best Director, or Best Actor, or Best Supporting Actor." It would help this movie get seen, I know that. It helps any movie, but especially a movie like this. So, that's great.

What was it like to work with Kodi? Were you very protective of him, during this process?

Mortensen: They were hard scenes, emotionally. As much as he didn't like it and I didn't like it, the fact that it was so cold, and we were wet and tired all the time, it actually helped. The cold was particularly hard for him because he's from Southern Australia, not that you would know it from listening to him in the movie...he'd never seen snow. The first day, it was snowing and it was very cold, and he couldn't believe how cold it was. It wore him out very quickly, and it pushed his emotions and mine closer to the surface. It made me more protective of him. I was trying to get him through the day, and then the next day. It was like the story.

A concern that I had, initially, was, "How does it keep from being flat? Enough with the suffering already." But, you trust the story and there are so many things that are learned along the way, in the interactions with other people, the environment and each other. You just have to trust what Cormac McCarthy wrote. Because the script was a very faithful adaptation, you just had to trust that book and that story.

What are your thoughts on the film?

Mortensen: Somehow the ending that we earn is strangely uplifting, and that's exactly how I felt, in telling this story and watching it. Even though I know the movie, backwards and forwards, having shot it, when I saw it the first time, it still affected me so viscerally that I needed to see it again because I wanted to then see the construction and the little subtleties of behavior. When you first finish seeing it, you say, "Well, I don't think I can watch that again." But, after a couple of days, it stays with you and you want to see certain things again.

Can you talk about working with Charlize Theron?

Mortensen: What I think about her, and I commend her for, and the director of course, is that the way she played the character, somehow I cared more about her character [in the film than I did in the book]. And, it's the same character from the book. But, when you read the book, and I've read it several times, it's easy to dismiss her and say, "She's weak. She's wrong." And, yeah, he remembers her. He's constantly tormented, remembering her. He can't sleep, thinking about her. Well, of course, it's his wife. But, in the movie, you not only understand her point of view, and it seems legitimate, it's probably more reasonable than mine. When she says, "How are you going to survive? Why? I don't want to just survive," he's like, "I don't know." I learn why - love, kindness and all that stuff - by the end, but I don't know how.

I do come to accept, in the end, that you can't know what tomorrow's going to bring. Most movies don't do that, in an honest way. I thought you got that from her. And, you could see the affection between them. You understand why she was so sorely missed and why that is the burden that he carries. It's not just this world that's gone. It's her that he's thinking about, all the time, and trying to keep that from his son. He says, "You've got to stop thinking about her. We both do." The kid says, "How do we do that?," and he doesn't have an answer for that. He tries, but he never really does, which is beautiful. He might throw her picture away, but he can't quite put her ring away.

If you where in that situation, what would you do?

Mortensen: You never know. That's what makes it dramatically interesting. It reaffirmed my belief in the preciousness of life and the value of making the most of life. I think it's a big physical and emotional test. The story forces us to come face-to-face and acknowledge our personal weaknesses and strengths and by the end of the story recognize the potential that everyone has no matter how dire the circumstances might be to be loving. In a profound way you understand that no matter what...it's always better to be nice.