By Robert Lindsey - translated by Ollie, Rio, Sage and Zooey 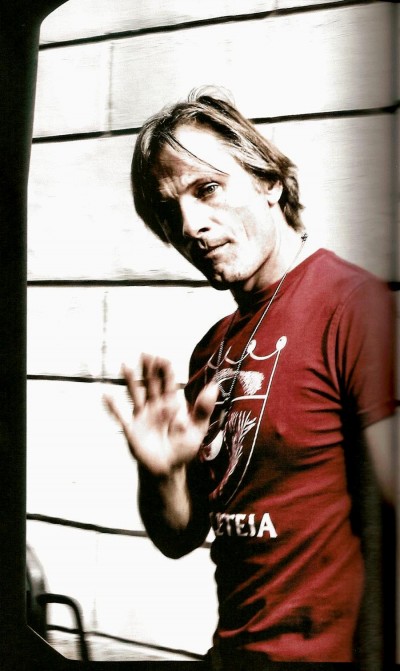 Esquire magazine (Spain), January 2010.
© Esquire.es.
The first time I gave some thought to acting I must have been about eight. It was in a play at the end of term. Another boy and I were inside this dragon costume. He got to be the head and received all the applause. I restricted myself to being the dragon´s bottom. When the curtain fell, I thought "Is this what it means to be an actor?"

When I attend a Perceval Press event (the press Viggo founded and where he publishes his poetry and photography books) people ask me for a lot of autographs. I know they don't want the signature of the poet or the artist but that of the actor who played Aragorn in The Lord of the Rings. Well, at least this way the book gets into their hands. Half of the work is done.

I haven't played in a theatre for the last twenty years. And, yes...I´m terrified! (Viggo opens in the Chiliean Ariel Dorfman's play Purgatorio in February, at the Teatro Español in Madrid, with actress Emma Suárez).

Javier Aguirresarobe deserves the Oscar. His work as cinematographer in The Road is outstanding. I'm a photographer myself and I enjoyed very much seeing his use of light's textures. He moves around the set in an old school way, without calling attention to himself. He doesn't need more than a candle or a lighter to create magic.

The Road leaves a strange aftertaste. It is a hard, terrible film, it affects you, but in the end the flavor is of hope. For example, during the filming we had horrible weather every day. Rain, snow, everything around us was destroyed... but nevertheless, the crew was happy because this was exactly what the movie needed.

I hate to talk about my childhood, my family, my personal life or anything intimate. You say one word in an interview and then you regret it the rest of your life.

I love going barefoot. I don't do it for any telluric stuff. It's simply that I feel uncomfortable wearing shoes. I have the most humble collection of footwear of any actor in Hollywood.

I've made a lot of shitty movies. Nevertheless, if I had the opportunity to relive that stage of my life, I would live it in exactly the same way. I drew very good lessons from it.

I'm lazy. But I know an effective remedy. If you want to conquer laziness, set a goal - whatever - and go for it.

My attitude toward religion has a lot in common with one of Walt Whitman's most famous poems: "I see God in every object, but I don't understand him at all".

As you get closer to the age of fifty, you start to feel that life is getting shorter. You know, we're all mortal and there's nothing we can do about it. Life is enjoyable and nobody feels like leaving it. But, well, I suppose those thoughts will heal with time. In fifty years I will have gotten over them. That´s for sure.

A while ago I was named "The sexiest man alive". I thought that was funny because that implies there are also sexy dead men (laughs). Some people call me a 'sex symbol"; others say I'm a crazy old guy. What's for certain is that I don't want to discourage either of them.

I understand feeling sad. I understand deciding to be arrogant. Or going mad. Everyone can find a good excuse to do it. But what I don't understand is boredom. There's no excuse for being bored.

I don't fear death because it means you cease to be. I fear it because it will prevent me from reading all the good books, seeing all the works of art, travelling through the most beautiful places...

As a child what did you want to be? A Viking.

People take their work and the money they earn too seriously. Almost no one can say "Look, I'm in the middle of a great movie; why don't we leave the meeting for tomorrow?".

I've never done comedy. I guess it´s like the fish eating its tail. They don't offer funny parts to me because they've never seen me doing them. And since they don´t see me doing them, nobody proposes a comedy to me.

People who are punctual deserve all my respect.

I'm not much for watching television. I do follow soccer matches [Viggo is a fervent follower of San Lorenzo de Almagro] and I spend a lot of time on the computer. Apart from that, I like to read and take walks.

There is nothing more inspiring than a crackling fire.

I have a sweet tooth; I love candy. They say that chocolate is good for the digestion. But if it wasn't, I wouldn't care. Of course, I love the ones that leave a bitter aftertaste.

Money serves to buy food, raise children and travel the world. All the rest is superfluous. "When they bury you in the grave, the suit you wear won't need any pockets."

To be able to play other people is a dubious virtue. I think it's much more important to be yourself. I don't like people who try to please everyone.

If you can't do something honestly, it's better that you don't do it.