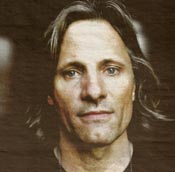 Image Richard Dumas.
© Libération.
The film is The Road, the adaptation of Cormac McCarthy's apocalyptic novel. This is going well. This profile of Viggo Mortensen, the third in three years, could also mean the end of it all. In other words, to put it clearly, it begins to grate all around me, and close by. "What? You are doing Morgenstern (sic) AGAIN?? Are you sure you haven't done a complete tour around him already?" (Smart innuendo, huh?) Kindly souls offer routes whereby I can overcome this obsession: "Robert Pattinson (the vampire hero of Twilight) is really to die for, isn't he?" Others are more direct: "Frankly, I don't get what you're on about, apart from going to bed, heehee...)

Such injustice, such meanness of spirit. Has anyone ever been criticized for visiting and revisiting Mona Lisa? And in addition is not one "battle" per annum for the pleasure of being with Viggo Mortensen justified as much as one or two with the Socialist Party or Nicolas S?

Our Mona Lisa, today, has the allure of a Latin footballer. Long hair, sneakers, T-shirt in the colours of one of his favorite teams, the Montreal Canadiens (hockey). Pretty normal, but pleasing, because of my slight fears that he'd appear as The Man, his character in the film. For the record: haggard, thin, bearded, grimy, bloodshot eyes, yuk. In one instance, naked, he stirs real pity, with all his protruding bones. No sign of the sculptured tattoos from Cronenberg's Eastern Promises. You have to ask yourself how it was that his appearance for this role as a father surviving beyond Armageddon did not scare off the kid playing his son. And if you believe the whispers from the set, the actor once again has pushed the boundaries, absorbing the experiences of homeless people, sparing himself no hardship, rain, cold, hunger, solitude, going as far as to sleep in the rags of the character in the story. Confirmation of the extremist streak that lurks beneath his Peace & Love mixed with mate affability.

"Oh, wow, hello, or rather hello again! This is what? The third time?" That seems to amuse him more than other things. With, no doubt, red-flushed cheeks, I set out to explain to him: "It's because, erm, you are, erm, the object of an ongoing experiment.." Him, wide-eyed: "an experiment about decay? " "Well, no, more of a long-term observation, allowing for change, whereas generally, erm, often, in journalism, the account is written in that instant....you see what I am trying to say?" "I see." "You, for example - your hair is longer isn't it?" Our Mona Lisa smiles invitingly. Suggests we speak in French (with a funny Canadian accent) if that makes things easier. Like a shooting star, Jeanne Moreau's Le Tourbillon infuses our brains.

Cut to the chase. We must have INFORMATION. Let's take this come back, because that's one, considering that six months ago an English daily announced your retirement, on the grounds of "burn out? " "No....I just said to a journalist that I was a bit tired and I don't have any plans. He concluded from that that I was finished with movies. Suddenly, I had to refute it, and he had said that I was like all actors, that I announced I was stopping.....to make a better comeback." He speaks very, very thoughtfully, which is certainly very, very calming in his real life, but a bit stressful when your time is limited. "I remain without long term goals. Like tomorrow for example, I start rehearsals for a play in Madrid. I have no idea what will happen after that."

The piece, he says, giggling "is again, a comedy.....it's called Purgatorio!" By Ariel Dorfman - dramatist-essayist-professor of literature-human rights activist Americano-Chilean who was cultural advisor to President Allende before exile as a result of the duo Jason-Medee. "They will try to forgive each other, not clear"...says a thoughtful Viggo. Will Spain, where he has already played previously, be a new stage in his personal geography? "Yes and no. It's also a return to my roots, considering I spent my childhood in Venezuela." Spanish is so natural for this son of a Danish farmer and an American woman, that all of the poems he wrote during the filming of The Road, he did so in the language of Cervantes. He sustains the website of his Publishing House, Perceval Press with a sort of blog of photos, quotes, extracts from newspapers alternated with the two idioms, with sometimes an incursion in French: an article from Le Figaro on the fifteenth Salon du chocolat, between a reflection from Varga Llosa on the Polanski affair, an analysis by Naomi Klein on the Nobel Peace Prize for Obama, and a quote from Euripides....sports results also have the right to a mention. Always this uncomplicated fluidity which carries everything in an uninterrupted flow. It's because of having questioned him a year ago about his activities as an editor we received a Perceval package containing some 60 odd books and CDs. A wave of Viggo. You dare not imagine the containers which must be received by the chosen one of his heart. Who, remains to be determined. The last time, the press people in Spain mentioned the singer Christina Rosenvinge and the actress Ariadna Gil, two local heroines. But he's a bachelor flying solo, lord sans ring, that divorced Exene Cervenka, punk singer and collagist with whom he has a son (Henry 21 years old, himself a poet, musician), treading the red carpet.

Solitude to him is a natural companion, he says, since childhood: "I wasn't that different from the boy in The Road. Even though I had brothers. But I was the oldest and they in particular spent a lot of time together without relying on me. Still today I wander in the forest, work, read....I really need to spend time alone each day. Otherwise I'm out of sorts, irritable. With time I've found how to do that within certain constraints that encroach on solitude, like promotions. Don't stress about it in advance, remain yourself, and be honest. That's the key." That's his old wise side. When on the other hand he can have the air of a teenager in those bursts of laughter which just reveals his gums. He also says, regarding his father, "You could say I manage to speak with him better today than before. But it's often like that, isn't it? Children realize that their parents are not gods, so they dethrone them. Then the child himself becomes an adult and maybe has a child of his own and realizes that he himself is not a god: reconciliation can take place." You get the impression of being around a fire and listening to Sitting Bull, calmly chanting between two worlds. The Mona Lisa will never cease to amaze us.