Source: Flicks and Bits
At the BFI London Film Festival I was very fortunate to attend the screening of The Road which is based on Cormac McCarthy's Pulitzer Prize winning novel The Road. The film did not disappoint me at all, it actually exceeded my expectations, it's one of the most beautiful but at the same time harrowing film I've seen in a long, long time. 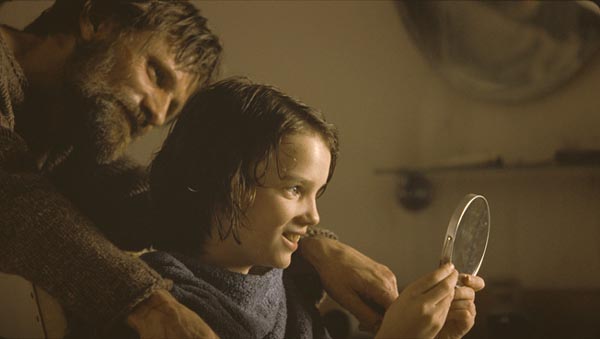 Image Macall Polay.
© 2929/Dimension Films.
Viggo did you come to the film from reading the book or the actual script?

I'm a big fan of Cormac McCarthy, I had read all of his books except The Road. The Road came out with great fanfare and went on to become his most far reaching universally appealing work because it's more straight ahead, it's easily understood, the dilemmas are understood by any culture. I hadn't gotten around to reading it just out of shear stubbornness because everyone kept telling me how great it was. I was meaning to read it. I had seen it wherever I went, in airports and so forth and I just hadn't read it. But then I read the script which I thought was a great script, a great story. I realised it was quite an honour to be offered this role. After reading the script I ran to the store to buy The Road and read it all and realised the script's a very good adaptation which only became better and better and fine tuned before we went out to shoot it. Including Lord Of The Rings and everything I know of, or have been involved in or seen, it's not only the most faithful not just in spirit but in letter adaptation of any book. It really is very much like the book.

There is a line in the book where McCarthy writes 'The frailty of everything revealed at last.' I think he was referring to nature and to people, I liked that about it. I liked the journey and that it had to be so tough. The bleakness of the landscape we were shooting in was helpful for me, for Kodi, for the crew. As an actor you're only as good as who you're with, first of all the landscape is so real, so gritty, so truthful that you had to live up to that and reflect it in your behaviour. It had to be very real, you couldn't hide at all emotionally.

I was worried when I got cast because the boy in the story breaks your heart. How are they gonna find that boy? Luckily we did. Kodi is amazing in the movie, he's an extraordinary individual, it's not just the measure of his talent but also his humanity that he was able to be joyful every day at work as a kid but then he could just focus and give what his character required, the sorrow, the doubt, the fear, then just the native happiness that he has. I like the dynamic between the father and the son because the boy knows nothing of how the world was, he only knows what I show him in the picture books or tell him about animals, birds, leaves on the trees, flowers, it's really interesting to play that. As adults we live in more of a grid anyway, we've accumulated more doubts and regrets and nostalgia while kids are just there.

Did it help that you are a father yourself?

To a degree yes, me and John both as fathers, it did give us a way in initially but you don't have to be a parent to understand this story. It was a way in but it came down to being quite naked from inside and being very honest, it had to be that way and it wouldn't have worked if I didn't have a partner like Kodi to pull things out of me then I would return it. I think the relationship that was forged through hardship, and also having a good time, you feel that on the screen. What happens at the end of the story which is strangely uplifting and quite beautiful when everything is stripped away. We've seen people at Q&A's after the screenings having a blessed-out look on their face, not really a smile, and still have tears in their eyes. I think you'd have to be quite obstructed internally to not be moved by this film, whether you like it or not. As the character says in voiceover 'If I were God, I would make the world just so' I think any story that inspires you to feel this life no matter how complicated it is, this world no matter how messed up it is, is good and beautiful in some way, is worthwhile and you wouldn't trade it if you could, that story has done its job and I think this film has done that.

Could you tell us about the process you went through to become The Man before filming? Obviously you had to lose a lot of weight?

There was a big feed before the last couple of days of filming when we did the flashbacks with Charlize. I just went out and made a complete swine of myself, it was nice. I wanted to seem somewhat healthier than I had been the last few months before. There were certain things externally, obviously I couldn't look well fed, I lost some weight, ate less and was more careful with what I ate.

I like movies because in movies, there's a shot, there's a close-up, a conversation, there's a look on someone's face that's beyond technical explanation, no matter how technologically advanced movie making has become, there are some things that are beyond explanation. In a case like this where the crew carries copies of the book around the whole time -- you felt accorded where everybody was trying to get on this journey, it takes you beyond what you're going to do. As far as preparation it's a lot less than what I have done before, externally, yes, I lost some weight. Yes, we thought about the logistics. You know, John shared movies that he was inspired by, in terms of the look of it. We talked about certain literature. Just those things that get you in a mood, but much less about the externals and far more about revealing yourself from the inside which is part of the attraction. In the end it's about all of us being brave enough to let it all hang out and to be satisfied we've given our all. It was much more internal.

What fascinates you so much about McCarthy's writing?

Mostly his descriptions, the dialogue is quite spare understandably and when you transfer that visually with a movie it becomes the unspoken things, the reactions that are emotional actions to extraordinary and difficult events. I really like his descriptions, my favourite McCarthy book is Blood Meridian, I know John likes that as well, the descriptions in that book like with The Road stop you cold, he's a real poet.

Both this and Lord Of The Rings had an otherworldly element to them can you compare the two projects in terms with what the experience was like especially emotionally and physically?

On some level you can, with Lord Of The Rings it was another story where the crew had the book, we would look forward to particular bits we would shoot, because they were true to the books the crew was looking forward to that. That's the support you get when people are really into the story, it's not just a job or another movie for crew members, it lifts you, it makes you braver. You could feel that on Lord Of The Rings as well but it was different, there were up to seven units shooting, this film is much more leaner but on some level it's more consistently truthful to human nature on some levels. There was a family feeling on both projects.

The movie is very faithful to the book, the only major addition is the role of the Mother.

What Joe's done is a lot harder than it looks like. With the character of the mother, the role Charlize Theron plays, there were rumours it had been expanded and it was a whole different thing but actually it's not. He found a very clever way by going to another medium, by how they directed the sequences. What I took from the book and I've read it several times was that I didn't dislike her but I didn't agree with her. The Man and The Boy were braver, in the book you sort of leave her behind and get on with these guys, what they did in the movie was...you understand her point of view and when in the film The Man and The Women agree to disagree her choice in the face of the end of nature and loss of humanity and hopelessness of it all and do what her neighbours did by ending your life in your own way is the rational one. It's the sensible one and when she asks The Man how do you plan to survive and why, he doesn't really have an answer. Joe really got her across, you understand her, her point is as valid as The Man's, it's just different.

What are your thoughts on the way the film ends?

It's surprising people interpret the ending differently, there was a Q&A where this person had an argument in the audience, the guy said I think these people will definitely be eating him (laughs). I said you're joking. They said he's definitely dinner and that dog is bait because of course the kid loves the dog. I said you're joking, then a big argument came about (laughs). The Boy works as the audience, I think, by the end of the film it comes down to a choice. If we strip everything away as human beings we have a choice we can make, we are equally able to do good as we are to do bad things. You choose compassion, kindness and love or you choose fear and all that provokes - contempt, lust, violence, cannibalism. It is that simple but to get to realise that you have to go on a journey. The Boy is hopeful. To know what's going on and still be hopeful takes it a step further, the father can only hide him from the evilness for so long.