By J Esteve - translated by Sage 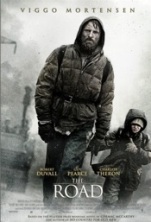 © Dimension Films/2929 Productions.
Rumors started in the spring of this year: Viggo Mortensen could be considering retiring from the movie industry. The North American actor, of Nordic descent, who has lived part of his life in South America, has not filmed anything this year, and The Road, the film he showed in Venice, was finished in 2008.

"Are you taking a break from your work or are you going to quit moviemaking?" is the question a journalist asks him in the press conference. "It doesn't seem like this is a break from work, at least here in Venice," he laughs. The actor assures us that he has several projects on his hands and that his next work will be a play in Spain. "I will be performing in Ariel Dorfman's Purgatorio, with Ariadna Gil, and then I'll probably do something in Argentina."

Viggo's relationship with Argentina is a long one. The artist lived in the South American country for a while and is a professed fan of San Lorenzo de Almagro. He shows up for the press conference wearing a blue and white team jersey with Messi's number 18 on the back. "We will be playing against Brazil, and we need a lot of luck," he jokes.

The news of a possible retirement shook the world of movie fandom because of two roles that many fans hope to see him reprise on screen. On one hand, David Cronenberg is preparing a sequel to Eastern Promises, and on the other hand there's Aragorn, the character that made Viggo world famous, and who should appear in The Hobbit, the adaptation of the Tolkien novel, in pre-production by Guillermo del Toro.

Mortensen, who is 50, is what some would call a polymath. Besides acting, he also paints, writes poetry, has published a few photography books and has even recorded some CDs. His withdrawal from the cinema would only be the laying aside of one facet of an extremely prolific career.

Although already confirmed by the actor himself, that retirement is not in his near-future plans, the Venice Film Festival will serve (as if he needed it), to increase his recognition as an icon of his generation, someone capable of giving life to the heir of Gondor in Peter Jackson's epic fantasy, and also capable of getting inside the skin of a father who must protect his son in the middle of a world devastated by a nuclear [sic] holocaust. "I believe that this is one of the most universal stories ever written. What father would not worry about his son?" he concludes.
Top of this page
Last edited: 12 September 2009 14:54:54