Viggo Mortensen: "Writing and acting are like being a kid again"

By Eduardo Bejuk - translated by Zooey 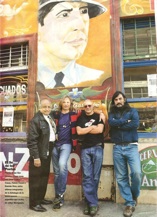 Image Maximiliano Vernazza.
© Editorial Atlantida.
"When I was a kid, my mom took me to the movies a lot. We lived here in Buenos Aires, near downtown. I remember one afternoon, in the decade of the 60's, very hot. We went to see Dr. Zhivago. Ahhhh! I left the theatre and the heat of Buenos Aires no longer mattered to me, because I was in Russia! It was snowing and everyone was very sad and I didn't understand what was happening but I didn't want to talk to my mom. When a film is good, when a performance is good, you believe it completely. I feel something similar about poetry...Let's see...In here, I have something I wrote that's relevant to that...Continue talking, in the meantime."

And Viggo Mortensen (50 years old, born in Manhattan, but with his heart in Boedo) pulls a notebook from his bag. The poets look at it. Because poets always look. And they see. At the table are Fabián Casas, Damian Ríos and Gabriela Bejerman, three of the 22 Argentine poets in the Anthology of New Argentine Poetry, the brand new book from Perceval Press, Viggo Mortensen's publishing house. A couple of days before, the presentation of the volume generated media coverage for the poets that they experienced with wonder and satisfaction. Now, relaxed, they share a round of coffee in the San Lorenzo bar, on La Plata Avenue, just across from where the old Ciclón stadium used to be, home today to a supermarket. And yes, since we are dealing with Viggo, there could be no other place. "There it is; it's called 'Matinee'," he says. And he reads it. *

After years of merging
and allowing yourself
to be assimilated
your hair and clothes
have turned brown.
Then one afternoon
you leave a theatre
after taking in the
restored version of
"The Hero Returns" and
find yourself wanting to
be treated special.

Mortensen wrote it around 1992, when he lived in Los Angeles, still an unknown actor to the general public, a New Yorker-Porteño [Translator's note: citizen of Buenos Aires]-Dane whose life had a huge surprise in store for him. A prophetic poem. Seven years later, Viggo himself would come to embody the hero of the most successful Hollywood trilogy. In the person of his Aragorn, the epic warrior of The Lord of the Rings, nothing would ever be the same. We got to know the actor Viggo then, as well as the nominee for the Oscar for his work in Eastern Promises. The "cuervo" Viggo, capable of walking on a downtown Parana street sporting a red and blue jersey, like it was nothing, bound for the Spanish Casa de Cultura. (He presented the book there). And maybe a few know of his facets as photographer, musician and painter. The genesis of his artistic concerns, however, is related to letters. Especially, poetry.

"I have written since I was a child. At six or seven, I did my first little stories. I talked about animals, kid things. At about 15, I started with poetry. I always write. In airplanes, in bed, in the bathtub. My son Henry (21 years old, he is studying in New York) also writes, and very well. Some time ago we did a poetry reading together; it was very fun. I was more nervous than he was," he tells the poets, for whom Mortensen is already more like a colleague. "Talking to him is like chatting with a friend from the neighborhood you've known all your life," says Fabian Casas, brilliant pen of the new breed that are called The 90's Generation. Damián Ríos is enthused about the momentum this effort can give to local poetry: "I don't believe that there are precedents in Argentina for a poetry book of the quality of this edition. For most of us, we're accustomed to releasing editions through our own heavy lifting". For Gabriela Bejerman, who also releases recordings under the pseudonym Gaby Bex (she will sing at the Centro Cultural Rojas on September 1), "To see so many people at a presentation was very rare, because one is accustomed to reading for only a few."

She tells the story that this anthology was listed for publication for some years, but it all fell through when a Mexican publishing house dropped the project. Gustavo López, from Bahia Blanca, who had prepared the anthology, discussed it with Kevin Power, a renowned art critic. "Don't worry. I'll talk to a publisher friend. I'm sure that he'll give you a hand," he reassured him. One day, López received a telephone call from Viggo, that "publisher friend." They agreed that López would send the texts. López hung up the phone without knowing that Viggo was none other than "the guy in the Lord of the Rings," as his daughter explained to him a few hours later.

How is it that you write poetry, Viggo?

"For me, it's like taking apart an engine. You take all the pieces, you put them on a table and when you finish putting it together, you leave some of them aside. Acting in films is the same. You try all the ideas and afterwards, you 'separate the meat from the bones.' I make notes And then I discard. Acting and writing are like being a kid again. The child draws, sings, does everything. Until he abandons it, because someone else does it better. You stop evolving, because you're afraid. That's why the artist keeps a certain...childhood, remaining open to what might happen. I know actors that have done very good work, but they stay in their dressing room studying the script, repeating it, memorizing it and it works for them. Perfect, but I prefer acting with people who are capable of improvising on the fly. That way, suddenly, what you see on the screen is real."

He came for just four days and promised to return to present new Perceval Press publications and to promote his brand new film, The Road, in which Viggo stars with Charlize Theron. "Am I going to continue acting? I'm doing theatre. After that, I don't know..." he says. And moreover, he reveals that he has written a script for a silent movie, "But no one wants to put up the money to make it," and he roars with laughter. Juan Carlos Casas, Fabián's father and secretary to Alberto Olmedo for two decades, intervenes to remind him of the literary roots of Boedo which was home in the 1920s to famous writers that are still immortalized on the printed page by Claridad Publishing Company. "The so-called Boedo Poets used to hang out in San Ignacio. And in every bar, you would meet all kinds of artists," he explains, while Mortensen's eyes open wide, wanting to absorb every word.

Do you feel nostalgic about that kid you were, who lived here?

"Ah...What one remembers from childhood is often mixed with things we are told. Memory is like poetry, just one version of reality, not accurate at all. I left when I was eleven years old, at the beginning of the '70s, and only returned in '95. More than twenty years in which I was cut off from Argentina. There was no internet; it was very difficult. Do you know what I had left of those years? All I had were these soccer picture cards of the Carasucias of San Lorenzo (the team from which came his idolized Bambino Veira), a Martin Fierro, a Don Segundo Sombra, a little San Lorenzo jersey...and nothing more. When I returned, at age 37, I got off the plane and I went downtown to look for my places. The little park where I played soccer with my friends, for example. I found different things: there was a McDonald's, new immigrants. But the sounds, the smells were the same. I rented a car and took off for everywhere. I went as far as La Pampa, I don't know...It was a lot of fun to stop in any location, take photos, talk to people. I came back because I had unfinished business."

And will you return to live here?

And Viggo, artist to the end, face suddenly alight, is again a little boy.


* Viggo, of course, read a Spanish version of this poem, which is quoted in the article in this way and is different only in that he uses the word "gray" in place of the word "brown." Here is the Spanish text: