"I prefer that people see movies at the cinema" - Viggo Mortensen

By Pacho Rodriguez - translated by Sage

Source: Diario de León
"The most important purpose of governments is to remain in power. But what other things do they do?" 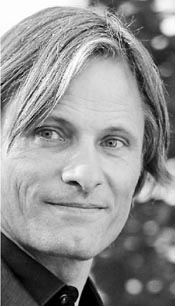 Image Angel Diaz.
© Diario de Leon.
The North American actor opens this Friday in Good, a view from a different perspective on the subject of Nazism. Despite his professional projects, he keeps León in mind and promises that he will soon be in these lands. "I will return to León. Of course. I have many memories of that land. As soon as I can, I will certainly come. Do you know Miguel Ángel Nepomuceno? Please hug him for me." One feels that one can chat with him, but on the other end of the telephone is a star, furthermore, a Hollywood superstar.

These things don't matter to Viggo Mortensen, a universally known actor, admired, respected, one who joyfully nurtures his artistic independence. And his professionalism, for when Mortensen is promoting a film, he stays on point in promoting it. Except when the topic is León, then, yes, he takes detours in his conversation, but always returns to Good, his most recent movie. Good is a portrait of life at the edges of Nazi Germany, in which guilt overlies the whole story.

And it is, because of the merits of this North American actor, proof that another type of movie making is possible. And, also, an attempt to place on the billboard a project that stands out for its purity. It makes no heavy sell nor has it time for big expenditures.

Viggo Mortensen [Manhattan, 1958] is an American citizen who looks Nordic and speaks Spanish with an Argentine accent. A deliberate type. But if we speak of Mortensen the actor, the result is more multifaceted: his characters do not go unnoticed, he made Aragorn famous in The Lord of the Rings, dazzled us with his work in A History of Violence and Eastern Promises, and amazed us with his personal and inimitable Alatriste, that convinced even the author, Arturo Pérez-Reverte, and that is no mean feat. These works are only a recent sample of a solid career of fifty [sic] movies in which he has shared screen time with the great ones of Hollywood. But he is not one more face in the media show. He doesn't even participate more than is necessary.

Mortensen is a special guy. Publisher and owner of Perceval Press, traveler who looks for the origins of his characters, musician, soccer fan: The actor turns out to be a nice man. And one sees that, as much as he can and when his tight schedule allows, when promoting a film he finishes the job. But, aside from the movie, the actor, who spent a long time in León in preparation for his role of Alatriste remains deeply touched by this land, which he has promoted in many colorful ways,

Mortensen is a committed man and he shows it. And he does it with his principal tool, subtlety. For example, he clearly states that a film is for seeing in the cinema. And, also, he delves into the role of citizens and governments, in a way that stresses that being in the world requires extraordinary effort.

And now he turns to Good, directed by Vicente Amorim, a film he defines as a small project in terms of budget but enormous in regard to the story that wants to tell. The pretext is Nazi Germany and the normal lives that had to become subject to a common destiny.

There are many warnings. Of feelings of guilt and the renunciation of an individual's basic rights and ethical principles. And Viggo Mortensen commands the role of John Halder, a professor. He plays it brilliantly. The scene where he dresses in a Nazi uniform is already part of movie history. He proves that he is an actor who explores, who goes to the sources, as he says, to tell a story.

How did you come to take on this complex role of a professor in Nazi Germany?

The movie is based on a play, Good, which I knew from the decade of the '80s, when I began to be an actor or was trying to be one. It is a well written story and an interesting challenge because I learned of it when I tackled my acting career, 25 years ago, and the script came to me now. I had seen the play at the time and I had been interested in it.

Why? Have you already succeeded at being a good actor?

There are days when I believe I am a good actor: But when you think you know everything, you believe in yourself too much. But the trick is not to believe it too much. When we believe we have it down pat, something happens that makes us pay attention.

To return to Good, are you more interested in these intimate projects, as opposed to big epics?

The film is small but very subtle. Without big economic resources. It has neither prominent figures nor extraordinary moments, but those can have inconvenient consequences. In general movies about Nazis have always shown extraordinary prominent characters or a catharsis with a dramatic conclusion. In this story, that does not happen; instead, things happen in an apparently normal setting. The result is that everyone ends up being involved in what happens, although they seem alienated from it and appear innocent. That's why I say that the film can turn out to be uncomfortable for some people.

Is there evidence now of the sort of discomfort Good can provoke?

Yes. In some countries these sensations are felt now. Because, with Pinochet, with Franco or in the Argentine dictatorship, or in recent years in the United States, those who said bad things about those moments, some of them are accomplices.

You refer to passive accomplices, right?

A country, a nation, a couple or a marriage is only a concept. They are processes that take shape depending on the contributions of each individual. What Spain is, for example, has to do with the decisions people make every day and in every moment.

What do you think, that there should be a greater collective commitment?

What one decides is important although I believe that it may be a small part. On the other hand, governments have as their most important goal to remain in power. That's not bad, but, in addition, what other things do they do?

And your character renounces his personal and collective commitments or is he a victim of events?

That's why the story is interesting. Because the story does not judge this professor, but presents him as a part of what was happening at the moment without reference to the extraordinary events of the time. It looks at the story as it occurred.

There is a great moment when you dress in the uniform in front of the mirror.

Yes, it was a scene that was difficult for me, complex and I worked hard on it because it showed so much of the history.

Now all that remains is that people go and see the movie. Is this why you strive to promote this movie at great cost to yourself?

It is necessary to make an effort so that the movie does not get lost. I prefer that people see movies in the cinema.

Although that's up to the public, you always attract attention. What is the secret of your success?

You never know. You have to be lucky. If anyone knew the secret he would be a genius. And all those who make films would hire him.

When will we see you in León?

I will come to León soon. Any time I have a few days off I will certainly go there. I really want to go. Give my regards to everyone there.