"The Road" With Viggo And Charlize May Surprise 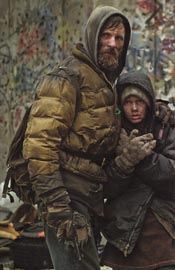 The John Hillcoat movie based on the bestseller by Cormac McCarthy is finally being shown, slowly, to a handful of people. Scheduled for last year but then held because special effects weren't ready, The Road will surface in October.

The Road comes from the Dimension side of the Weinstein Company, not always my favorite place. It was home earlier this year to the dreadful Soul Men. But The Road was also made by another group, Mark Cuban's 2929 Productions. It was acquired by Dimension, but really seems like a regular Weinstein movie.

Hillcoat has done justice to McCarthy's Pulitzer Prize winner. The Road is elegiac and moving, artful and yet suspenseful. No, it's not a raucous good time. It can be thoughtful and grim. But here's the interesting thing: Viggo Mortensen's performance as a father walking through a post-apocalypse America with his young son is just fascinating. It stays with you long after leaving the theater. Mortensen is that good.

There aren't a lot of other actors in The Road. Charlize Theron is very good as Viggo's wife, in flashbacks. Both Robert Duvall and Guy Pearce make cameo appearances. Eleven-year-old (he's 13 now) Kodi Smit-McPhee is just right as the couple's son.

What Hillcoat and screenwriter Joe Penhall do is accurately capture McCarthy's tone and language. This isn't easy to do. The Road is a bleak trip, told in muted blacks, blues, and grays. There are no blue skies after whatever caused the apocalypse (is it nuclear war? we don't know. Everything left, including the trees, is dying.)

So what Dimension will have to do is establish an audience for The Road. It opens wide in October, rather than platform the release. This should work just in getting the curious in all at once. Mortensen will be on a lot of top 10 and awards lists, and that should help, too. Depending on how the year shakes out, he could be a formidable contender.

The Road also has a cult quality, which could add to its mystery. The hold up from last year was to finish the effects, and they were well worth it. A whole city is painted out to reflect destruction. The sky is a miserable, darkening entity. But the scenes I liked best were ones where Mortensen takes his son back to the home he grew up in -- now abandoned. Hillcoat has made a little piece of art. You can't ask for much more than that.