The following is Viggo's speech when he accepted his Golden Boot Award at the Beverly Hilton Hotel. 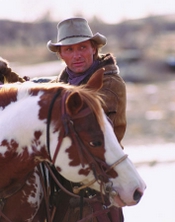 © Touchstone / Buena Vista Pictures.
Frank T. Hopkins was a half-Lakota Wyoming cowboy. He seems to have understood horses and he seems to have understood people, and did not appear to have had much use for disparaging any breed or race. Perhaps this was in part due to his own mixed ethnicity, which was and is far more common in the United States and in the world than many people seem to want to acknowledge. Hopkins was ahead of his time as a humane horse-trainer and endurance rider. He was also an example of what I have seen in cowboys (and cowgirls) I have met and admired among Argentines, Uruguyans, Moroccans, Algerians, Egyptians, the French, New Zealanders, Australians, Icelanders, Lakota, Blackfeet, Apache, Quebecois, and so on: a straightforward, open-minded, and ethical individual. I think it is a wonderful thing to see the apparent revival (again) of the "Western" genre in the movies, but it might be worth keeping in mind that neither cowboys nor stories in the "Western" genre are exclusively an area of expertise or solely of relevance to North Americans. Making "Westerns" can be as positive or negative, as universal or narrow-minded as the stories they portray. Making good "Westerns" can mean being on the right track, but, as Will Rogers said:

"Even if you are on the right track, you'll get run over if you just sit there."

If you are interested in Frank T. Hopkins, please visit www.frankhopkins.com