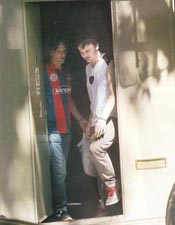 Image Enrique Garcia Medina.
© GENTE.
It is 4:30 pm on Saturday. There is almost no traffic in this scorching Buenos Aires weather. In two hours, Boca and San Lorenzo will play the second match of the Apertura 08 tournament finals. Among all the fans that are headed towards the Racing Stadium, one stands out, though at first sight he looks like a regular Argentinean. A red and blue flag hangs from his car window, right in the middle of downtown Buenos Aires. The driver waves the flag in the wind and, in perfect Spanish, he shouts: "Go, Cuervos, go!" Then he lights one cigarette after the other, as if his anxiety was out of control. In spite of the almost 35 C (95 F), the car windows are open.As he stops in the traffic lights, people start recognizing him: "Isn't that the guy from Lord of the Rings?" asks a pedestrian as he drives by. The driver? The most famous San Lorenzo fan. Viggo Guido Mortensen (50) and his son Henry Blake Mortensen (20, he does not speak Spanish) are in Argentina with the sole purpose of seeing his beloved team. "The only important thing today is that San Lorenzo wins," states the actor. Yet, this story will not
have a happy ending....

Tale of a passion

A small sign says: Hotel Palermo Suite, though the front does not look like a hostel. Far from the glamour of five star hotels, in Palermos neighborhood, sleeps Aragorn, the warrior from the Lord of the Rings, the movie with the most Oscar nominations in the history of cinema. Viggo and Henry Mortensen leave through the hotel garage and start their journey to Avellaneda. Pretty soon, somebody spots him. Adriana Lavallet gets a picture with the actor. "I can't believe it, I am also a San Lorenzo fan... We can't lose today," she says, while they shake hands.

Then, in 9 de Julio Avenue, he spots a salesman. "Hey, hey, sir," shouts the American disguised as an Argentinean when he stops at the traffic light. "How much is the San Lorenzo soccer ball?" he asks from his car. "For you, $35," the salesman answers without recognizing the client. But while they are finishing the transaction, somebody shouts: "Aragooooooorn, give him the money!"

The Mortensens continue their journey, but when he gets to Riachuelo, he needs directions. "How do I get to the Racing Stadium, sir?" Viggo asks a local resident, who does not recognize him either.

When they get to the stadium, it's time for autographs, pictures and nervousness. "I'm really anxious about the match, and I'm sure we will win. Boca players had more time to rest than our players, but we have a very tough team." And when the GENTE reporter asks him, he answers without hesitation: "I would rather see San Lorenzo win the tournament than get an Oscar definitely."

He requests to see the match from a small box, just with Henry, out of superstition, you know.

The match is history, just like Mortensen's dreams of seeing San Lorenzo become champions. He can only hope for an award now, when the Academy gives them out in March, if he gets nominated.