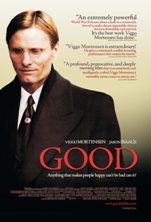 © Odd Lot Entertainment, LLC.
Using one man's moral decline to express the fate of an entire nation, Good is a devastating drama set in Germany in the 1930's. Starring Oscar-nominee Viggo Mortensen in a dazzling change-of-pace performance, the story centers around John Halder, an enlightened intellectual who gets swept up by the momentum of Hitler's rise to power. Though basically a good human being, Halder has a number of personal and professional problems that are suddenly solved when he agrees to do a small service for a powerful political figure. Though no single action of Halder's is particularly harmful in and of itself, the accumulated effect of rendering a number of such services in exchange for a number of increasingly compromising rewards, takes its toll. One day, this seemingly "good" man, wakes up to discover that, like countless other German citizens, he has become a Nazi.

Based on the acclaimed play by C.P. Taylor, Good also stars Jason Isaacs, Jodie Whittaker, Mark Strong and Gemma Jones. Produced by Miriam Segal, it was directed by noted Brazilian filmmaker Vicente Amorim (The Middle of the World) and adapted for the screen by John Wrathall. Shot entirely on location in Budapest in 2007, the film boasts an outstanding team of filmmakers that includes BAFTA Award-winning director of photography Andrew Dunn, production designer Andrew Laws, and costume designer Gyorgy Szakacs. Good was invited to have its world premiere as a Special Presentation at the 2008 Toronto International Film Festival.

Producer Miriam Segal had been determined to bring Taylor's play to the screen ever since she saw it as a student in the 1980's. Named among the "100 Best Plays of the Century" by the National Review, Good premiered in London at the Donmar Warehouse in September of 1981. Starring Alan Howard as John Halder, the production drew critical raves, with the Daily Telegraph praising it as a "profound, involving work that forces members of the audience to consider what their own reaction would have been had they found themselves in Germany in the Thirties." The play transferred to Broadway in 1982, which occasioned Frank Rich of the New York Times to call it "an undeniably provocative work...written with an intelligent, light touch in a most imaginative form." Clive Barnes of the New York Post called it "triumphant, wonderful, and incandescent."

Yet, despite all the praise, Taylor's play resisted easy screen adaptation. Born in Glasgow in 1929, Taylor became one of the leading figures of London's socially conscious artistic movement of the 60's and 70's. Good was the last of some 70 plays he produced but, tragically, Taylor died at the age of 52, just a week after the Donmar Warehouse debut. Time Magazine suggested the ambitions of the play, both thematically and stylistically, when it noted that "history is a nightmare into which the antihero of Good sleepwalks." Taylor himself made no bones about the seriousness of his work; "My principal themes," he said "are the conflicts between man's ideals and his limitations."

As Segal recalls, "I was simply overwhelmed by the play, and knew immediately I would do whatever was necessary to produce the film adaptation." She ultimately secured the rights, but not until 2003, some twenty-plus years after its premiere. She then had to shepherd the project through various incarnations over the past several years until the right people and elements finally came together in 2007. "I felt an enormous sense of responsibility," Segal confesses, "which enabled me to persevere to this point."

Image Larry Horricks.
© Good Films.
Segal's former classmate, actor Jason Isaacs, shared her vision and passion for Good, remaining verbally committed to the project over the years. His own reasons for helping the film get made were due to the play's subject matter. "One gets more perspective," he says, "looking at modern times through the prism of history, such as The Crucible making a statement about McCarthyism." Isaacs supported Segal throughout the project's many ups and downs, and even signed on to be one of the film's executive producers.

But, it was Viggo Mortensen's attachment to Good that finally gave the project some momentum. Oscar-nominated for his brilliant portrayal of a Russian mobster in David Cronenberg's Eastern Promises, Mortensen also drew raves for his starring role a year earlier in A History of Violence. Suddenly at the top of his game, Mortensen sparked to the role of John Halder, even though this bookish, cerebral intellectual couldn't have been further from the laconic men-of-action he has so recently been playing. Interestingly, he too had a special connection to Taylor's play; "I was starting out in acting 25 years ago, and was in London on what was only my second audition," he recalls. "I didn't get the part, but while I was there I saw a play, Good, with Alan Howard, and it made a strong impression. When the opportunity to play the role on film came along, I thought it an interesting way to make a circle out of the experience some quarter century later."

Despite his affection for the play, it was John Wrathall's screenplay that Mortensen responded to, noting that "it's a very strong script, well-written and structured, and grounded much more in the lives of ordinary people than the surrounding events." This is high praise indeed, considering that Taylor's play is such a complex mixture of dramatic devices and differing tones, and was quite difficult to adapt from stage to screen. "I saw the original production in London," recalls Wrathall, "and I remember it being a very theatrical show, employing the full resources of the stage. Cast members would burst into song at any given moment, and the time frame jumped around." Another key narrative strategy used in the stage production called for John Halder to speak directly to the audience. In adapting to film - a photographic medium that is intrinsically more realistic (or less artificial) than the theater - Wrathall had to wrestle with Taylor's many formal conceits, extracting the story, yet leaving enough room for the sort of stylistic ornamentation that would bring the audience inside John Halder's head.

"The challenge was to dramatize what's going on internally without having him actually turn to us and explain himself," says Wrathall. Maintaining the musical interludes and the non-linear structure of the play were mandatory for the screen adaptation since, as Segal notes, "we don't live our lives in nice linear section." Otherwise, she gave Wrathall license to start with a fresh perspective on the material and to avoid treating the play with too much reverence. Segal says, "John was protective of the play, but did what is always necessary for a writer to do to his source material, which is to attack it where needed." With this in mind, Wrathall added elements of a thriller, and maintained the "Britishness" of the characters, as in the original play, in order to underline Taylor's premise that the story is not just about Germans, but about anyone. And everyone.

Though far more grounded and realistic than the stage play, Good still employs various elements of stylization. After all, John Halder's story is still primarily a metaphor for the larger moral journey of the German people. As such, the film has a very deliberate structure, much like a classic morality play in which every scene takes the protagonist one step further in his ethical evolution. Vicente Amorim acknowledges that, in making Good, he was influenced by both Bernardo Bertolucci's The Conformist and Istvan Szabo's Oscar-winning Mephisto. Like those two earlier works, his is also a film about a man so intent upon succeeding in a corrupt society, that he himself is corrupted. And, as in those films, Amorim heightens the visual elements - sets, costumes, and lighting - to emphasize that what we are watching is symbolic, a sweeping parable about conscience and consequences. As he puts it, "Good is a private and particular look at one man's life through which we tell a universal story."

Image Larry Horricks.
© Good Films.
Amorim and his design team worked hard to give Good the requisite "look," one that was both accurate and expressive. As cinematographer Andrew Dunn points out, "I've translated plays to the screen before, and realize the process can be quite tricky. The creative challenge was to broaden the space while always remaining inside Halder's head." In order to avoid the clichéd, sepia-toned quality of most period pieces, the filmmakers decided to do away with the customary clutter. "We're not trying to make audiences feel they're being transported back in time, "Amorim explains. "The story we're telling could happen even now, so exaggerated period references would only hide relevance. Besides, Germany in the early '30s was incredibly modern."

Producer Segal agrees: "Everything we're using is of the period, but employed in such a way as to make it appear contemporary. Clothing, lighting, colors...all of it." Production designer Andrew Laws summarizes this streamlined approach to historical re-creation when he says, "Throughout the movie, we shift attention from larger events to illustrate what the average person is doing or how he is reacting. We're trying to show what's happening next to the parade, not the parade itself."

Laws goes on to explain, "Through the design and look of the film, we're trying to put aside assumptions of the period. The post-Weimar world ushered in a new wave of modernity and hope, so we cheat with antiquity a bit. For example, you'll see no hats and we're very careful about cars being shown. Likewise, costume designer Gyorgyi Szakacs (who has worked with Istvan Szabo, most notably on Sunshine), observes that "the wardrobes are accurate to the period, but highlight certain styles that are most similar to today."

The combined effect of this visual approach is that it allows Amorim to avoid the quaint nostalgia that comes with seeing beautifully preserved artifacts, images, and props from the past. After all, nostalgia for the Nazi era is the exact opposite of what the filmmakers wish to evoke. Once again, Amorim drew his inspiration from his forebears: as in The Conformist, which made brilliant use of Fascist-era Brutalist architecture to convey the dichotomy between the protagonist's lofty ambitions and his lowly stature, Good uses Hitler's affection for neo-classical temples to underline the split personality of the entire society - a society in which all those clean, white marble and limestone surfaces are meant to hide a nation's debased, besmirched soul.

Amorim is the first to admit that Good is "a story with a message." However, he hastens to point out that it is "more about the people delivering those messages, people who are intrigued, and flawed, and charming, whom we can all relate to, and who come to know that everything we do in life has consequences." When principal photography was completed on Good, it marked the end of a journey that Miriam Segal, Jason Isaacs, and Viggo Mortensen began 25 years earlier, when they all were separately overcome by the story of a good man whose life takes a tragic turn - not from wilful intent, or evil malfeasance, but by getting too absorbed in his unexpected good fortune to realize that it was actually bad fortune.

As Segal says, by way of conclusion, "C.P. Taylor wanted to find a metaphor for conscience, and illustrate the idea that we live our lives without exploring or acknowledging peripheral vision. We are driven by individual need, And, what can easily happen, as we see in Good, is that if we separate ourselves from the behavior of others, we create a society without heart or compassion, in which terrible things can manifest."

In John Halder's case, it begins with a seemingly simple request from a Nazi official: "Do you think you can write us a paper?"
Top of this page
Last edited: 11 January 2009 15:03:13