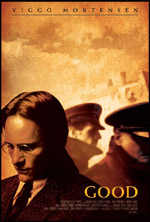 © Odd Lot Entertainment, LLC.
The movie is set in Germany, in the years of Hitler and Nazism.

Halder is a university professor with some troubles in his family: an ill mother, an absent-minded wife, and two young children growing up.When he writes a novel where the protagonist helps his beloved girlfriend to kill herself because of a grievous incurable disease, his life radically changes, with consequences which he won't realize until he is in the face of the bare hard reality.

This movie with almost imperceivable borders, hits you like a punch in the stomach, especially thanks to the exceptional and unrivalled performance of the great Viggo Mortensen, who brings to life a seemingly poor-calibre character, who is really complex instead, and carries a lot of troublesome questions.

A set of very important subjects is bound together with the apparent main theme of the movie: the Nazi context in the Germany of the late '30s and early '40s. If you look beyond the surface though, beyond topics like euthanasia, friendship, family, the ideals you fight for right to the end, or the inability to understand cruel and perverse mechanisms, you can find the more interesting theme of Good: the choices which Halder makes day by day, driven by the events, without realizing the real effects of his behaviour, acting with the only purpose being not to be swept away and not to jeopardize his life and his career.

The Nazism is almost an excuse to tell the story of a man put in the face of huge dilemmas, not completely aware of the grim reality which surrounds him. From this point of view, it could seem like a movie which tries to show a Nazi Germany where the policemen or the ones who embraced the Nazi ideas didn't know they were hurting a lot of people and didn't know Hitler's intentions and plans.

Actually, it's nothing like that, because this isn't the story of the whole Germany or the story of all the Nazis, this is the story of a complicated and suffering man, a university professor who has to struggle with the small/big problems of life: an ill mother who depends totally upon him, a wife who has long periods of "absence" and is very mutable in her love for him, the best friend, a psychologist who soon finds himself on the opposite side of the distressing and lethal river that was Nazism.

One of the details which most impresses you is that the protagonist, when he feels particularly nervous or excited, sees the people around him making some weird singing performance. Halder entrusts it to his psychologist friend but he cannot find an explanation for this situation, so he goes on, worrying about the problems he has to face day by day, without thinking about the future and what it can bring him.

He is a very practical man, who doesn't waste time thinking about what happens beyond his little world, but he begins to open his eyes as horror and panic become more and more evident.

Another great value of Good is that this movie tells in a very simple way one of the greatest dramas of history (and there are so many movies about this subject, not all successful), being able to convey the reactions of the innocent people, forced to give up their ideals, their own life (the character of the best friend is very strong and well-constructed) and the disarming and paralysing nonchalance in the behaviour of the Nazis, who were convinced that their opinions claimed their opinions were the most right and natural ones (the character of Halder's second wife is terrifying in a very strong scene, when she feels a strong sex drive towards her husband after he wears the Nazi uniform for the first time).

Two sequences stick in the viewers mind more than any other, both because they are highly emotional and because of the way they are shot and played: the first one is when Halder goes to visit his mother, who is in a pitiful state by now (the performance of Gemma Jones is really deep, especially in this visual and emotionally high-impact scene) and the other one is the terrific final scene, where all the horror is disclosed before our eyes and Halder's eyes: his face crossed by a pain and awareness tears deeply and strongly hurts our hearts and souls.
Top of this page
Last edited: 21 November 2008 15:29:54