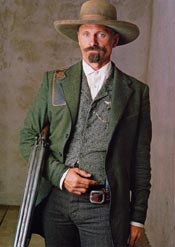 Cowboys & Indians magazine, October 2008
Image Lorey Sebastian.
© New Line Cinema.
The last time Viggo Mortensen cowboy up on the big screen, in 2004's Hidalgo, he spent most of his time galloping across the Arabian Desert as a long-distance endurance racer. In Appaloosa, the forthcoming film version of Robert B Parker's popular Western novel, he's back in the saddle again. This time, however, Mortensen is riding tall - and shooting straight - as a lawman in one of the most lawless realms in the Wild West.

It's 1882, and the folks in Appaloosa, a wide-open mining town, need some outside help to stop renegade rancher Randall Bragg (Jeremy Irons) and his violent cronies from terrorising the citizenry. Enter Virgil Cole (Ed Harris) and Everett Hitch (Mortensen), veteran peacekeepers who quickly establish law and order by doling out some rough justice. But when a bold and beguiling widow named Allison French (Renée Zellweger) steps off the train one day, Cole is seriously distracted. Hitch is immediately suspicious - and loyalties are sorely tested.

In addition to starring as Cole, Harris directed Appaloosa. Right from the start, he wanted Mortensen - with whom he'd previously worked in A History of Violence - to play Hitch. Despite his firm commitments to several other projects, Mortensen - an avid fan of Westerns - accepted Harris' offer.

"One of the many things I love about Viggo," Harris says, "is that he's a man of his word. Even though he was busy up until two days before we started filming, he came prepared, ready to work. He really knew what he wanted to do and who this guy was that he wanted to play. And he did it. I'm really proud of him."

C&I: Appaloosa is bound to be a big hit with Western fans. What's your impression of the film?

I know it may seem very simple. But to make it simple, a lot of work had to go into it. Not only on Ed's part, but by the production designer, the people involved in the wardrobe, everybody. And Rex Peterson, the guy who trained the horses, did a really great job. When you're an actor and you step onto that kind of set and everybody's working that way, it makes the make-believe part of it that much easier.

C&I: Was it easier to develop on-screen chemistry with Ed Harris because you'd already worked together in A History of Violence?

Mortensen: It certainly helped. Coming in to this one, we already kind of understood each other. But I think his approach, his attention to detail, and his ability to be in the moment and use whatever is happening - just the fact that he's such a fine actor - and so subtle - helped even more. Even if I had never worked with him before, I would have been able to feed off him. Just like the first day of work on A History of Violence - when he came in, he made it easier because he's so real and so intense. Even when he's being quiet, he brings something out of you.

C&I: As a director on this film, he certainly brings out the best in you, Jeremy Irons, and Renée Zellweger...

Mortensen: [Laughs] You'll notice that none of us are people who are exactly known for doing Westerns, even though I'd done a couple before. But everybody did their homework and got it right. Of course, it didn't hurt that Ed already knew how to ride a horse and shoot a gun. And, likewise, Jeremy Irons is a very good horseman, which helped when he had to ride away pretty fast after a shootout. Nobody had to double that. 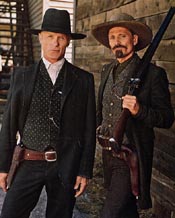 Image Lorey Sebastian.
© New Line Cinema.
C&I: How did you prepare to play Everett Hitch? Were there certain details - like, say, the guy's scarf - that you added yourself to make the character your own?

Mortensen: Actually, yes, I did bring that in. One thing that sometimes happens when people think they're being really authentic is that they tend to make everything look too worn-out. If you do the research, you'll see that even if a cowboy was poor, he'd take pride in certain things. Like, his saddle wasn't going to be some piece of crap. And they had color - it wasn't all drab browns and grays, all worn-out stuff. That scarf - that's something Hitch takes pride in, and he takes care of it. If you notice in one scene where I'm talking to Ed, I'm actually mending it. It's like, if he's going to do something important, like that shootout or like that final gunfight at the end, he would want to look as good as he could because there's a good chance that he's not going to make it. And there's a certain superstition to it, too.

C&I: There's something almost ceremonial about the way you put on the scarf - like a bullfighter getting ready to face death in the afternoon.

Mortensen: That's an interesting comparison. See, I like the way the shooting is presented in Appaloosa. It's not like those fancy quick-draw things you see a lot of times in movies. If you're good with a gun, it involves a certain amount of skill. But it's also about being steady and just doing it. And sometimes it's just a matter of being lucky. When Ed and I have that shootout with those guys, it's very simple. We just decide, OK, this is the only way it's going to go. And we're either going to make it, or we won't. And we barely do. The gunfight at the end is very straightforward. It's not like I'm standing there waiting to pull my gun out. It's more like, No, I'm going to pull my gun out, and then I'm going to wait.

I looked at old Remington drawings and other images to see how guys would really stand in gunfights back then. It wasn't that thing you always see in movies, where the guy is standing there with his legs apart and with his hands out waiting to draw his gun. Not that people never did that. But it just made more sense to me that you'd have one leg forward, and your hand forward, and your gun's already out. I have to say, I did think about it like a bullfighter at that final moment, with the sword. I saw a Remington drawing of a guy facing down another guy in the street, using exactly that position.

C&I: Do you ever wonder how you might have functioned in that period? As a lawman, maybe?

Mortensen: I don't know. [Laughs] I don't think I'd have the guts. But, yeah, I do find the period very interesting. I've read a lot about it over the years. And the Westerns that have gotten it right, I really enjoy. The thing is, in this case, I was playing a person who wasn't originally from the West. He was a guy from the East who'd gone to West Point. But he'd been out there for 17 years or more. If you really look at my clothes, they're odds and ends. They're not necessarily matching. They could all be parts of suits that I'd had before that were more Eastern-cut. And there are certain things about his posture, certain things about his way of speaking, that indicate he's not originally from those parts. He's another one of those guys who went to the West looking for adventure.

C&I: Appaloosa wouldn't work if the audience didn't believe that Virgil Cole and Everett Hitch have been friends for so long and have worked together so long that they literally can finish each other's sentences. You and Ed make it very easy to believe that - which is a good thing because the relationship between your characters and how that relationship is tested is really what the movie is all about.

Mortensen: Absolutely. Basically, this is a very interesting story about friendship and what can happen to a friendship. There's the drama. Things change so much when this woman comes into the picture. And your best friend, who you thought you knew so well, starts acting odd. You're still supportive, but how do you handle it? How do you maintain that discreet, loyal attitude when you have some misgivings about what he's doing and about his new relationship? Virgil, Ed's character, is a pretty smart guy. And he's going to be quickly insulted if I come right out and say something.

C&I: It's very funny - but also very revealing - that whenever he can't think of the right word to use in a situation, he waits for you to provide it for him.

Mortensen: And you notice I'm never disrespectful when I do that. It's always matter-of-fact because he knows that I'm completely loyal to him. That's the sort of thing you have to find when you're playing these characters - something that doesn't always have to do with the words. You just have to feel that the guys respect each other. It's not just what they say. It's how they say it and what they do. In fact, a lot more of it has to do with what's not said - the things I don't say to him and the things he doesn't say to me. All that goes into defining the relationship and building the drama.
Top of this page
Last edited: 31 August 2008 11:01:20