The Road - End Of The World

By Mathieu Lecerf - translated by Chrissiejane

Source: Studio
After the fantastic No Country for Old Men, American author Cormac McCarthy is the focus of a new adaptation for the screen: The Road. In it, Viggo Mortensen plays one of the remaining humans battling for survival.

Journey through a post-apocalyptic landscape. 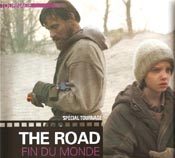 © Dimension Films.
The world is devastated. Numerous fires have ravaged the country. The towns are deserted and smothered in ash. The few survivors eat canned foods, when they are not practicing cannibalism......in the midst of this apocalyptic scene, a father and son pull a cart containing the bare necessities for their survival, and, fleeing the rain and snow of the north, take "the road" towards the south.

That's the synopsis of the new film by director John Hillcoat (The Proposition, unreleased in France), faithfully adapted from The Road, Cormac McCarthy's best-selling Pulitzer Prize winner in 2007, with 2 million copies sold across the Atlantic.

The shoot came to reality in the region around Pittsburgh, Pennsylvania, the same place where, some years earlier, Robert de Niro stalked the deer in The Deerhunter, and Buffalo Bill stalked young overweight woman in Silence of the Lambs. A vast region, comprising mountains, deserted beaches, forests and lakes. "We're also filming in New Orleans and Portland, but for most of the scenes we need a no-man's-land" John Hillcoat admitted to us, "that's why we've settled in this region, near Lake Erie. It offers a lot of backdrops that fit perfectly with the scenes, and the sombre light, low skies, strong winds, and ever-present clouds are a perfect illustration of the vision of the apocalyptic world of the novel".

A Black And White World

It's 1 May. Americans work on 1 May. They no longer understand a 35 hour week. The days of this shoot, from Monday to Saturday, are long, to defray the cost of the team, large in any movie, even an independent production like this. Around a hundred people gather today on the set. It's the 45th day of shooting out of 58, but the passion seems as strong as on day one.

With wild hair, a bushy beard and mucky clothing retrieved from a recycling centre, VM plays "the man". The young Australian actor Kodi Smit-McPhee, aged 11 years, plays "the boy". Charlize Theron, who plays "the woman" in flash-backs, does not work today, and nor do Robert Duvall and Guy Pearce, who have small roles. The two actors present are very focussed, the scene they are shooting is dramatically important, its the moment when they are robbed of their cart by "the thief" played by Michael K Williams (Gone Baby Gone). Before the first take Spanish Cinematographer Javier Aguirresarobe (The Others, Vicky Cristina Barcelona) debates the shot with John Hillcoat. His work is of prime importance in conveying the sombre and monochromatic style sought by the Director. A dozen takes, from three different viewpoints, are used to get the sequence in the can.

Between each one, VM stays in character: he takes himself away to the edge of the forest, dipping in and out of a plastic tarp, just like his character."it's a complex role" the actor tells us, "because he had no name, no known past, I had few elements from which to create him. So I concentrated on the bond he has with his son, which is the principal theme of the movie. The Road is a metaphor for the beginning of as journey along a philosophical pathway which clarifies the relationship between a father and son. I spent enormous amounts of time with my own son and discussed thousands of subjects with him before I could really absorb the full meaning of this unique rapport." Then, as is his habit around the shoot, the actor takes up a disposable camera and captures images of the ambiance of the set, the surrounding countryside, and those who share this adventure with him, "to save some trace, other than mental, of my experiences and my encounters."

The day is unfolding perfectly, which has not always been the case. John Hillcoat confirms: "When I finished reading the novel, two main things attracted me: the profound story, simultaneously personal and universal, which binds the father and his son, and the believability of McCarthy's vision of the end of the world. But all through pre-production, I never thought we'd encounter quite so many problems. We're working in many places, in different states, we're dependent on the weather because 99% of the movie is filmed out of doors. In addition, one of the principal roles is played by a child, which means limited hours of work for him and the permanent presence on set of two teachers. It's a heavy load, and also a large team to manage. It's a brilliant adventure, but I can assure you, minute by minute it has been very difficult." One takes him at his word.

At the playback console, I am dumbfounded by the beauty of the images. The young Kodi impresses equally. Indeed, all the crew predict a golden future for him. He is the subject of conversation, and gets similar admiration from Viggo: "Kodi is an excellent partner. His father, who is also an actor, is on the set to help him get into his role. We have succeeded in establishing a very privileged relationship together. He has such unbelievable intelligence, patience and talent for his age. He's able to demonstrate a degree of emotion I have rarely seen in a child."

Suddenly Viggo leaves the set and returns with a bag full of chocolate. The rest of the team look at him knowingly; an assistant explains to me that "it's a true addiction!" Gentleman that he is, the actor offers some to everyone. For my information he adds, speaking in French, "It's delicious! Made by a family firm. 80% cocoa! " He avails himself of about ten bars during the day. When I ask him if he is in agreement with McCarthy's point of view, he responds immediately, "It's impossible for me to imagine the end of the world. I'm too much an optimist for that. I even believe that one day David Cronenberg will be as well known in the USA as he is in France! But as for the end of the world, I leave that to others."

The sound engineer, Edward Tise - who rubbed shoulders with the French chief sound operator on the shoot for Into The Wild - tells me that his best friend is French and he'd like to introduce him to me. He leads me to his workstation and shows me his new Aaton sound-mixing console. "It's my new best friend! Made in France! It's the best. It was created in Grenoble by Jean-Pierre Beauviala. I experimented with it in Sean Penn's film, and since then, I can no longer resist using iti!"

The last take of the day ends. The whole team applauds spontaneously, expressing their feelings about work done well.

"The man" and "the boy" have at last found "the thief" and recovered their goods. They resume their journey through this devastated landscape. Just as Aragorn moved inexorably towards Mordor. As if the struggle is never-ending, with its joy and sorrow. And its fears. Everything that life can be for a man, everything that he bequeaths to his son. That is The Road.
Top of this page
Last edited: 10 August 2008 08:02:21