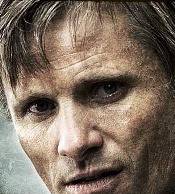 © New Line Productions Inc.
I read that your co-star Maria Bello said her first reaction after watching the film was, "I thought I was going to vomit." What was your reaction?

Ummm...I didn't feel like puking. I was very happy, to be honest. I guess I was sort of drained, but the main thing I felt was happy. I think David Cronenberg's way of [making] a movie is as close to perfect as you're going to find.

How do you feel about your very famous status as a sex symbol?

Is it very famous? Compared to other people? I wouldn't say so.

I would say so. One of my colleagues named her cat after you.

Have you heard of a better homage?

Well, I met someone last night who showed me a picture of a baby, and they had named the kid Viggo. You know, Viggo is a pretty dorky name in Denmark. It's like Oswald or something. It's a very old Scandinavian name, at least 1,000 years old.

Can you clear up a rumour?

Yes, I am actually a man. I'm dispelling the rumours. I'm not really insecure about it. It's not a big deal. But the plain fact is, I am a male of this species.

I'm sure a lot of women will be happy to have that confirmed, but that's not what I was going to ask. Is it true that you once ran over a rabbit and ate it?

That is true. I didn't run it over on purpose. I was alone. It was late. I hadn't eaten all day. I was driving through a kind of unpopulated area in New Zealand. At the time, it just seemed like the logical thing to do. So I skinned it and cleaned it and cooked it. Later someone told me that there's a problem with the rabbits, a disease or something, in that part of the country. But I cooked it pretty thoroughly.
Top of this page
Last edited: 9 March 2008 14:48:58