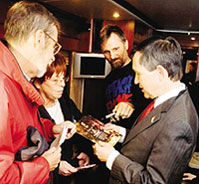 Dennis Kucinich Campaign 1.6.08.
© unionleader.com.
Viggo Mortensen was getting furious watching the debate Saturday night. The actor, who vaulted to Hollywood's A-list as Aragorn in the Lord of the Rings trilogy, is a Dennis Kucinich supporter. He argues that the congressman picks up new voters after every televised event. So how could ABC, he wondered, decide even before the first primary that his candidate wasn't worth putting on stage. So Mortensen did what any politically inclined celeb would do: He hopped on a red-eye to Manchester to stump with Kucinich.

"I'm not saying money isn't important. I'm not saying that capitalism isn't important. But we're now at a place that reminds me of the robber barons of the 19th century" with corporate influence on the electoral process, Mortensen said last night at Piccola's Italian Restaurant on Elm Street. He wants to see the same sort of "common sense" approach to campaigning adopted by Canada and several European countries, where you "have a set period that starts on a certain day and ends on a certain day, whether it's six months or nine months, and you can't campaign before or after that period or you're penalized."

He adds that each candidate should be funded solely with identical amounts of taxpayer money. "That way if you're clever or quick on your feet, like the congressman, your money will go farther," Mortensen says. "Right now, candidates like Hillary can get away with not saying much because she knows she's got millions."

Although yesterday was the first time the actor had ever met Kucinich, the two - who couldn't look more different - worked well together on camera and off. They referred to one another's talking points during interviews and, while chatting up supporters, Mortensen whipped out a pen so Kucinich could sign an autograph.
Top of this page
Last edited: 20 January 2008 09:21:22