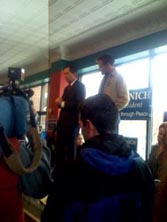 Dennis Kucinich Campaign 1.6.08.
© Choire Sicha/New York Observer.
The actor Viggo Mortensen was so ticked off by the exclusion of Dennis Kucinich from last night's debates that he got on the red eye to New Hampshire. He stood on a table with the Democratic candidate in the storefront headquarters in Concord, N.H., this afternoon, and spoke softly about the debates. "You have four people up there, no disrespect to any of them, who are cherrypicking from what Dennis is talking about."

"If you're going to steal from Dennis and not let him be on TV, then steal all of it."

Kucinich, in a grey suit and a big grin, asked the crowd of very young people: "Are you ready to send ABC a message? Are you ready to rescue Donald Duck and Mickey Mouse from Disney?"

He then said that the three Democrat frontrunners were recipients of contributions from Disney executives and had a "vested interest."

He called the debate an "infomercial for private insurance." But his wife disagreed. "There was no debate," she said.

Somewhat counterproductively, most of the crowd of volunteers is now waiting to talk to the good-looking jeans-clad actor instead of soliciting undecided voters. But they'll get there.
Top of this page
Last edited: 17 January 2008 14:32:54