Mopping The Floor in Eastern Promises

Source: Focus Features
Julian Spencer has been doing stunts for 18 years, the last seven of which he served as a stunt coordinator on such films as Bridget Jones: The Edge of Reason and Dirty Pretty Things. For Eastern Promises, he was given a number of fight scenes, the most complex being the ambush of a naked Nikolai Luzhin (Viggo Mortensen) by a couple of Chechen thugs out for revenge in a Russian bathhouse.

© Focus Features.
It can't be easy choreographing a fight with a naked man?

No, not at all. We had to spend time with the construction and art department going over the space's design and how it interacted with the fight so I could say early on, "I want that corner padded and that corner . . ." But there was a limited area where I could put padded tiles. And with Viggo being naked, he had no protection whatsoever. One of the Chechens in the film was a 6' 5" guy, who've I worked with before, and he told me he was not going to hold back on the fight sequences. And he wasn't kidding.

Nakedness aside, how do you creatively choreograph a scene like this?

You start with characters. Cronenberg described the characters and why the Chechens were coming after Viggo, and so we started with that. And I knew that it was going to end up being a bloody mess. In scenes like this, I worry about over choreographing, because then it starts to look staged. 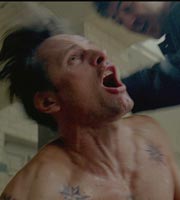 © Focus Features.
How violent did it get?

They went all out. Initially we talked about the moves and rehearsed them in very slow motion. But in the action, I let the characters' physical strengths come out. There was a lot of hitting at the face and diving over onto tiles. [Viggo] was supposed to land on the rubber tiles, but often flew right past.

Ouch! Did you need to worry about exposing too much of Viggo to the camera?

You can't get away from that. He gets picked up off the floor and thrown to the other side of the room. And doing master shots of this, things were going to be revealed - but very quickly and in a tasteful way. If you tried to cover that up, it would have shown through in the fight.

What makes a fight realistic for you?

When it fits the story. Viggo wasn't some Rambo who could cut anyone to shreds. This was a real man fighting for his life.
Top of this page
Last edited: 17 December 2007 07:55:35