Look Who's Talking - A Conversation Between David Cronenberg and Viggo Mortensen

Source: Interview
When the director known for getting under the skin teams up with the actor famous for playing strong, silent, offbeat types, anything can happen - and it does. 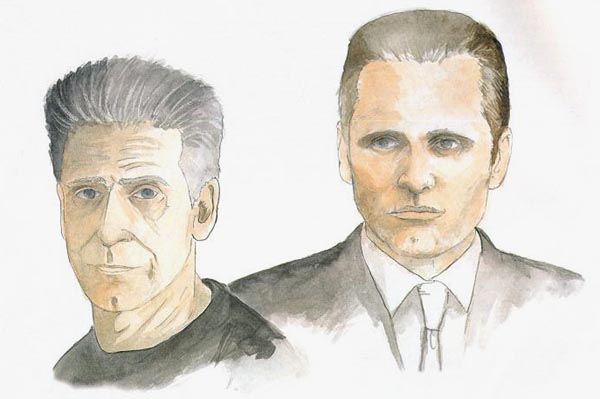 Interview magazine, October 07
Image Paul Paddock.
© Interview.
In the recently released Eastern Promises, starring Viggo Mortensen, Vincent Cassel, and Naomi Watts, director David Cronenberg zeros in on London's Russian crime community. As he did with 2005's A History of Violence (which also starred Mortensen), Cronenberg paints a dark and dangerous picture - a twisted vision that's at once unsettling and strangely beautiful. Here the director and his star talk tattoos, Nabokov, and the big difference between Russian and American ex-cons (hint: most Americans don't read Pushkin).

Viggo Mortensen: Are you ready to have another abnormal conversation?

David Cronenberg: Are we capable of any other kind? [Mortensen laughs] Where are you?

VM: I'm in the bathroom.

DC: And where would the bathroom be situated in terms of the universe?

VM: West Coast, California. Are you in Toronto, in your attic?

DC: I'm in Toronto, in my so-called office.

VM: I'm sorry I called so late, but this is actually early for you, isn't it?

DC: It's perfect for me.

VM: I'm kind of the same, but I have a bad habit of staying up late and getting up early.

DC: Well, you work more than I do.

VM: I guess so. You're the chess master; I'm just a pawn. I don't mean you're manipulative - I mean you're good at using time and directing others how to use it.

DC: It's a veil of illusion.

VM: Like the name of my character in the film: Nikolai Luzhin.

DC: Speaking of which, I'm going to send you a picture of me with a tattoo.

DC: Well, no. But my daughter, Katie was doing a photograph for the cover of a local magazine, and we came up with the idea of my wearing a tattoo. Of course, the tattoo I wanted was the boss of all tattoos - the one with the skull smoking a cigar and wearing a crown.

VM: That was on the cover of one of those Russian tattoo books. People look at you differently when you have a tattoo, don't they?

DC: You know, there was a woman walking down the street, and she looked at me and smiled - but then she looked down and saw the tattoo and suddenly turned away. It made me think of that time when you went into the pub in London with all the tattoos we put on you and you startled the Russian immigrants.

VM: Yeah, that was weird. I'd decided not to remove them because it took the makeup man so long to put them on each day. To the Russian community they were probably recognizable as prison tattoos - our makeup team went through a lot to get these details right. Plus, this was when [former Russian agent Alexander] Litvinenko was poisoned.

DC: Yeah, that happened about halfway through our shoot.

VM: And everybody became alert to anyone who spoke or looked Russian.

DC: What's strange is that when we started the film, the Russian mob in London was a very obscure topic. But because of the Litvinenko poisoning, by the time we finished, it was daily front-page news.

VM: Remember when we went to dinner and there were those two couples who were having a big party, and lots of vodka was flowing? That was the second place it happened. There, it was a little scarier because there were some rough-looking types. One guy, who was kind of drunk, got up the courage to speak to me. I didn't know exactly what he was saying, but I knew he was referring to the tattoos. And then, with the help of the owner, we explained that they weren't real.

DC: That it was only a movie.

VM: Yeah. And then the guy laughed at me because I was just this imitation. Have you gotten any Russians' reactions to the film?

DC: Oleg [Fedoro, the Russian dialect coach for the film who also plays a tattoo artist] sent me an e-mail today, and I'm going to read it to you. [reading] "Dear David and Viggo, I hope you are all right. This is to let you know that some Russian ladies were so impressed by the attached picture that they almost fainted - it is great. Warm regards, Olegar."

VM: He's referring to the poster?

DC: Yeah, it's very striking - just your hands with the tattoos.

VM: Before shooting began, I spent some time in Moscow and St. Petersburg, and while I didn't speak to that many people there - I mostly went out, and watched, and tried to stay out of the locals way - I did ask what they thought of European or North American movies about Russians. They all had kind of the same response - that they were ludicrous, though enjoyable. But one, who seemed to be more film savvy than the others, said that he supposed the same was true for the way they depicted Americans in their movies.

DC: It's really hard to capture the tone of an alien culture, especially when you have them speaking your language, But I have to say, I've gotten great feedback that our portrayal was spot-on.

VM: Oh, that's great. Just like A History Of Violence was your "United States" thing, this is your "Russian émigré" thing. I think that the foundation of the film is so authentic that it's probably going to raise the bar.

DC: As you were talking, I was thinking about Nabokov. A lot of his books were about Russian émigré culture and their flight from Russia after the revolution: ending up first in Berlin, then in Paris, at times in England, and then finally in America. It's funny that I would end up creating a gangster émigré culture as opposed to a literary salon culture, although there were literary gangsters in his milieu as well.

VM: I remember studying books about ex-cons from Russia, and while most had probably not read so much, compared to the average convict in the United States, they were still pretty poetry sensitive.

DC: Well, you can't be Russian and not be able to quote some Pushkin - whether you're a criminal or not. You're not even allowed to be a criminal if you can't quote Pushkin.

VM: While we were filming, I was reading a lot of Russian stuff. One poet that I really liked was Osip Mandelstam; I sent one of his poems to you, with that line, "Yes, I am lying in the ground, but my lips are still moving." You know, the idea that you can't be censored. It made me think of Tatiana and her diary.

DC: Right, the voice-over in our movie.

VM: Her narration sort of works in that way - even though she's dead her lips are still moving, which is how certain things get resolved in the story. Anyway, are you nervous about showing the film to the world?

DC: No, it's already been shown to a lot of people, and I've been getting all kinds of incredible feedback.

VM: So do you think [Russian president Vladimir] Putin will like this movie?

VM: I think he'll probably get some of my character's tattoos.

DC: Frankly, I think he has them already.

VM: That's why he always wears those white gloves. Well, is there anything else? It's onerous to talk to me, I know.

DC: It's torment. I actually had to take some codeine pills before we started. How is your back, by the way?

VM: It's fine. I was like a drugged cripple for some of the stuff we shot, and you were nice enough to lend me your high-tech back brace and frozen packs and all that stuff, though certain things I couldn't really wear while we were shooting.

DC: No, like in the sauna [in which a naked Mortensen battles two knife-wielding thugs]. That scene seems to be a standout. It's already a classic. People are talking about it,

VM: Who haven't even seen it. [laughs] Have you been to the movies recently?

DC: I don't go to the movies. But, actually, just last night I watched The Testament Of Dr. Mabuse (1933), the Fritz Lang film. It was great. And then, because of that, I started to read the Fritz Lang biography, which is pretty interesting too. It's amazing how things haven't changed. In the '20s in Germany they were going crazy because all the movies in the cinemas were American, and they felt that German movies didn't have a chance against the bigger, slicker American ones.

VM: Well, our movie isn't really an American movie, is it? Technically, I'm the only American element in it.

DC: I don't think of you as an American. As I said when we did History Of Violence, I could tell that you were actually Russian - it's obvious from your cheekbones. I doubt that you'll be able to play any other kind of role now. They'll say, "You can't cast Mortensen as an American - he's so foreign."

DC: I thought it was incredibly bold of me to cast you as an American in History Of Violence.

VM: Well, yeah, but it was a twisted view of America.

DC: The only kind that's accurate. And on that note, we should hang up.

VM: Okay, but I know your lips will still be moving.

DC: Because you buried me.