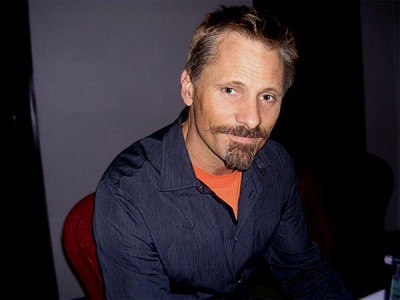 Image Brad Balfour.
© Times Square.
It's entirely understandable why director David Cronenberg has recently cast Viggo Mortensen as his lead in two complementary but very different films (2005's excellent A History of Violence and the new Eastern Promises) - Mortensen inhabits these characters and the characters inhabit him. It is said that when he played Aragorn in The Lord of the Rings trilogy, he didn't even notice when director Peter Jackson addressed him by the character's name for part of a day.

But in Eastern Promises, this Oscar-bound actor has created his most defined character yet.

This hard-nosed tale of a midwife (Naomi Watts) who becomes entangled with London's Russian mob after she saves the baby of a dying 14 year-old prostitute - a victim of this gang's involvement in sex-slavery - could easily have fallen into cliché and mindless adventurism in the hands of a less skilled and unique director. But through Cronenberg, both Mortensen and Watts have an ideal vehicle to deal with the ambiguities of two richly drawn characters caught up in a world fraught with violence and despair.

Since his screen debut as a young Amish farmer in Peter Weir's 1985 film Witness, the nearly 50-year old actor's career has been a steady string of increasingly well-rounded performances in over 30 movies. Working with a crop of A-list directors from Jane Campion (The Portrait of a Lady) and Brian De Palma (Carlito's Way) to Ridley Scott (G.I. Jane), Mortensen stirred attention as Diane Lane's boho lover in Tony Goldwyn's A Walk on the Moon (1999).

Born in New York to a Danish father and an American mother, Mortensen split his childhood between Manhattan and places like Venezuela, Argentina and Denmark. He speaks several languages and is also an accomplished poet, musician, photographer and painter.

So you've walked in sporting this new look [a trim goatee] - what's this all about?

It's for a Western I am doing that Ed Harris is directing.

And what are you drinking there [he's holding a small silver pot with a pipe attached]?

This is mate - it's an Argentinean tea. It's a ritual, like [smoking] a peace pipe. People drink it all day. It's very good for you, like a strong green tea with lot of antioxidants.

Were you drinking mate in the movie?

There's no mate in the movie, but I drink it all day long.

Beside mate, what else did you do to get so fit for this film?

Physically... I had to study up and learned certain fighting techniques and defensive moves that someone like that might know. Some of them came from Russian military training manuals, and other things I just learned from other people. I tried to get more or less in good shape, although he's not necessarily in great [shape]. He's a guy who needed to be able to do what I do in the movie. But he also has a relatively good life; compared to his life previously, it's a better life. Though not that he's making all that much money - he's a driver for this family - but he eats well. It's sort of a balance - it should be realistic-looking.

It's not a super-hero sort of a story, but it's nice to have a balance. The people are believable, they are layered, and they are complicated, like they are in real life. They're sometimes unpredictable in a real way - in a good way. Not just my character but Naomi's character as well, they will do the right thing in difficult circumstances, though there's really no reward. It may be quite risky to stick your neck out for someone you don't really know [but they do it anyway].

Did you develop a back story for your character Nikolai, since this film has such richly layered, complex elements?

I always ask myself the same questions about what happens before page one. Where was he born? How was he raised? How did he get there? Some characters you have the advantage of knowing more beforehand. This one was very interesting. The only thing I really had here was my interest in [the subject] and my curiosity; I wanted to learn to how to speak properly, to use the right slang, to understand all that I could.

I knew how to do some of the stunt work. I could drive a car [laughs], but I had to get used to driving a Mercedes on the wrong side of the road. And that was sort of tricky to learn. There was a lot to learn, which makes it fun to me. It's the things you learn before you start that you can always count on.

If the shoot isn't good or the movie doesn't turn out so well, you at least have what you have learned. It was especially good here. I met Russian people for translating, and also people who knew the background of the character I was playing. I went to Russia for a couple weeks before we started, which was also very helpful - to see people and to have a visual sense and a memory of what it looked like, what it smelled like, and how people behaved.

And did any of those Russians have tattoos?

Was it difficult to learn the Russian language?

I have an advantage because I speak Spanish; the J sounds and R sounds [makes that rolling rrrrrr and chhhh sound] they have in Russian, so I had an advantage to copy those. But they have some vowel sounds that are trickier and particular to Russian and other Slavic languages - I had to work on that.

We had an excellent dialect coach, a guy named Stanislaw in Los Angeles, who worked with us on translation. And on speaking, I met some Russians who helped me - they said, these are good translations, but a guy with your background, a prison background, a street background, would use this kind of word with a double meaning, this kind of joke. Oleg was his name; he was working with us during the shoot - a Russian actor living in London. He was very helpful in keeping us honest and being exacting. It paid off. I met some Russian journalists who said they were pleasantly surprised. They were accustomed to movies made outside of Russia with Russian characters that were, at best, a pale imitation or full of cliches, with bad accents and that were sometimes full of gibberish.

Did you do other research, like talking to some of the underage girls who were victims of the sex trade?

By the time I went to Russia I had done most of my research; in a way, I didn't need to go. I went for two weeks and though I had people recommended to me from different walks of life, I intentionally didn't go around with somebody. I wanted to go by myself and get an unfiltered look at it. Like if somebody comes to New York, I could show them around... or they may want to stumble around on their own.

I wanted to see things on my own, to stumble around in Moscow, St. Petersburg, and then out in the middle of the country, where I wanted to see what impressions I got without anybody trying to make it better or worse. I just wanted to see it. I tried to learn as much as could. I am glad I went - even though there aren't specific things, other than a good visual sense and a memory of places I was supposed to have been, where I was born and raised and worked in.

Your characters in this film and in A History of Violence have some similarities - both were part of an organized crime group. What was different about the two roles?

Each role I play is different. I am always trying to find as many facets [as possible] because I think people are endlessly interesting. All of us are unique and behave differently and react differently on any given day in any given situation.

Apart from where they are from, the main difference you could point out is that the character [of Tom Stall] in A History of Violence was trying to convince himself to consciously forget something and pretend it was not real. He was play-acting in that sense, whereas Nikolai, although he had secrets, he's pretty clear on what he's doing and why. He's not deluding himself in any way.

What's your relationship with David now?

We do have a really good shorthand. We are able to work on a set by now - and even during A History of Violence - with a minimum of analysis or questioning, and it just goes well. I can show him things and can tell whether it's working or not without speaking about it.

The good thing about being on the same wavelength is that I can devote all my attention to the other people in the scene, to reacting, and to being helpful in terms of telling the story in general. It's good when you feel safe, that you're in good hands - not just for the more extreme scenes in the movie, but any day's work. If you really know that the guy in charge is intelligent, that he knows what he's doing technically, and also has that open mind, and has a selfless way of approaching the work and is secure about himself, [then] if somebody comes up with something, whether it's a crew member or actor, or something strange or unexpected happens, he uses all of it. What he doesn't need he discards, and no offence is taken if we don't agree on something. But we mostly agree on everything.

That was an amazing fight scene in the shower - how did you work that out?

It was written that way, based on where it happens. I am in a steam bath. It's logical that it took place that way and it was logical to shoot it that way - it wouldn't make sense otherwise. David is a friend and also a gentleman, apart from being a great artist, so he politely said "This is what it says, what do you think about it?" Obviously we were choreographing it in gym clothes before, but when it got to that day it seemed pretty obvious that it's got to be done this way. I'm sure you will shoot it in a very straightforward way.

Apart from whether one has any clothes on or not, any violence that he shows in this movie just like with A History of Violence - although some people will say, "Ahhh, he's over the top, it's gratuitous," I disagree completely. He's one of the most responsible filmmakers today as far as showing violence - which there's very little of compared to other movies. It just stays with you, because he shows very little of it and he's very direct about it. He shows you what happens, and what the consequences are physically - and emotionally, in some cases. Certainly he does in A History of Violence, and also here. That makes him very honest.

Feeling safe and trusting somebody obviously helps, because then you're going to feel awkward in a situation like that - as vulnerable as you should be - but not more than that. It's not like it's a weird thing on the set, the director's not making you additionally uncomfortable. If anything, David was just as a goofy as ever. He'd come over and I'd be sprawled out between cuts -"Oops, sorry" - and he'd make an inappropriate joke and walk away, and go "let's do another one." He fosters a relaxed atmosphere [that] encourages play.
Top of this page
Last edited: 1 November 2007 15:53:24