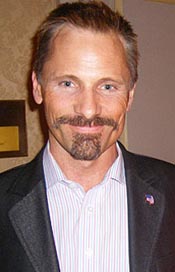 © PlanetOut Inc.
If David Cronenberg ever wondered whether Viggo Mortensen could outlive his role as a would-be king of Middle-earth, his fears should at last be put to rest. His latest film's steam bath scene has Mortensen as a sinewy, heavily tattooed Russian hit man dispatching two hired assassins in hand-to-hand combat - entirely naked. Aragorn who?

Eastern Promises follows Anna, a midwife played by Academy Award nominee Naomi Watts, as she seeks the family of an infant whose underage mother died during childbirth. Soon she's on a collision course with Nikolai (Mortensen), chauffeur and hired hand for the head of London's Russian crime syndicate. Full of violence, sex, and an unquestionably homoerotic relationship between Nikolai and the mafia leader's son, Cronenberg and his blue-eyed leading man keep audiences guessing.

Viggo, you are so buff in the movie. Have you lost weight since filming wrapped?

Viggo Mortensen: And he had to digitally add genitals. I neglected to tell him I have none. He actually had to add them, not just enhance them, because I had none whatsoever.

DC [Laughing]: That was certainly a conversation killer right there.

Even when the film ends, so much about Nikolai is still a mystery. It looks like he's at least a double - and possibly even a triple - agent, but we're not sure. How well did you really know this character?

VM: I know, but I'm not telling. Besides, how much do we ever really know about the people around us? How well do we really know our friends, parents, lovers, partners, co-workers, neighbours, spouses? Everyone keeps some secrets. This man is no different. He has had many different experiences in his life and draws on each of those as is necessary.

Seeing Nikolai - this very hardened, reserved character - attacked when he was at his least protected in the steam bath is like the male version of the shower scene in Hitchcock's Psycho.

DC: Yes, that had occurred to me but only recently. About three days ago it occurred to me that you're never more vulnerable than when you're naked, wet, and hot. All your blood is just right there to be sprung out.

Viggo, you're completely naked for that entire scene - and the camera never cuts away once. How long did that take to film?

VM: It took two days. Just two days, which was great. We were in three rooms, and one of the rooms we were in twice, just flying all around. It's really the way it should have been, and it turned out incredible.

DC: It's never mentioned in the script whether he has a towel, what happens to the towel, whether he's naked or not naked. All these things had to be decided by me. Once we had the set, we had to consider whether the actors could handle the stunts. Of course, for Viggo that would have been impossible anyway. There's just no way you can double somebody who's naked. The bodies are just never the same. Once I discussed the plotting Viggo said to me, "I'm obviously going to have to do this naked." And that's all the discussion there was about that.

Homophobia is a driving force in this film. Kirill, the mob boss's son, orders his friend Soyka killed. Later it's revealed his motive is a rumour Soyka's gay. In his interactions with Nikolai, the way he looks at him and other nuances, the film suggests Kirill might very well be homosexual.

DC: One of the problems with multiculturalism - which is what London prides itself on, as does my hometown of Toronto - is it's in opposition to the melting-pot idea of America. Everybody who comes here becomes "American" and takes on American values and gives up what they brought to the country. One of the downsides, I suppose, of multiculturalism is all the old hostilities and prejudices and stereotypes come with these people and their cultures. Certainly that whole Russian mafia and underground is very macho and homophobic. There's not much room to move with that. It's been ingrained over centuries and centuries. It's an ancient tribal thing where one might say "Oh, those Georgians are all pederasts" or "Those Albanians, they're all homosexuals." It's all a way of stigmatizing, but what it's really encoding are these ancient, ancient rivalries. We don't know that the Soyka character really was a homosexual. It's just a way of stigmatizing him and, in a way, justifying murdering him. We later find out the real reason maybe he was murdered is because he was going to the police. He was betraying everybody. Was that even true? We're not sure. It's just a convenient excuse.

VM: It's interesting having Kirill call him a "pederast" to begin with, and equating pederasty with homosexuality, especially from someone who may be himself a homosexual...

DC: Yes, Kirill could be and is not able to accept it. It's a form of Kirill's projecting [his own feelings on Soyka].

VM: My character uses [his relationship with Kirill] to get what he wants. It's practical. It's hard to know. Is there something there? You never really know, and that's OK too. It's part of what I was saying about life and people. How much do you know? How sure can you be? It's useful - and yet there seems to be a genuine and unusual...unusually played-out...tenderness between these two characters. There are unexpected moments of kindness, tenderness, caring, intimacy in the middle of all this bravado.
Top of this page
Last edited: 22 October 2007 14:03:30