Source: Univision
The following is a translation of the videoclips broadcast (in Spanish) by Univision as part of the Eastern Promises promotion. 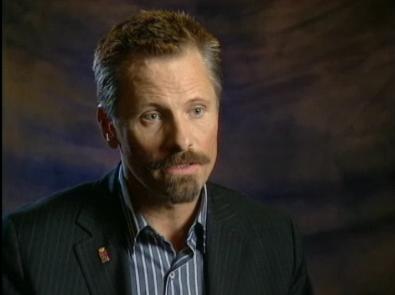 "The way Cronenberg does his movies, just like in A History of Violence, you can see what violence is...that it is terrible, and that the consequences of violence, the emotions that it creates...the physical consequences are terrible...that violence is no joke. It's never been [a joke] for Cronenberg. And people who say: 'Ah, Cronenberg, he's nuts, he always shows these horrible killings', the fact is that there are very few minutes of violence in the movie, but it looks real. It does not give you the possibility, like other directors do...very good directors as well...to work with the camera, to put like a curtain so that it doesn't bother you too much...it doesn't affect you too much. But in the case of Cronenberg, it's like: 'Here it is, it's ugly...and you're going to see it.'

But in spite of that, and of the trailer, and the idea that you may have about the movie, and the aspect that I and the other actors have in the movie, [people think]: 'Oh, this is going to be really hard, very dark, very tense all the time.' The truth is that I laughed a lot while shooting it, not only because Cronenberg is a very funny guy, really, but because the story has some funny details. There is a very interesting sense of humor in the relationship between the characters, and the story...when you get to the end of it, you realize that it is a story that has to do with compassion, with the risk that some people accept in very difficult conditions, sometimes brutal, to go and help just because they feel that they have to do it. You see it in Naomi Watts' character and, to a certain extent, in my character. It's kind of surprising...that such a tough guy, you don't really know why, would say: 'I have to do something here. This is wrong.'

There are people that do this all the time, in our families, in our communities, in spite of the fact that you are not going to get a prize for helping someone who needs help. Sometimes in difficult cases, like we all know in real life, you have to do it. That is compassion...to do something for someone without getting a prize, without them realizing, and sometimes even with the possibility that this will have negative consequences for you, that you will suffer for helping someone. And you can see this in the movie. In the end, it's more about compassion, the amazing compassion that people manifest in circumstances as difficult as these...it has more to do with this than with violence. And violence is not Russian violence or English violence. It's just violence, human behavior. For me Cronenberg is a master at studying and showing complex, detailed, credible human behavior."

Univision.com Video 9.23.07.
© Univision Communications Inc. All rights reserved..
An anecdote from during the filming

"The language of the tattoos that the character has, which are a lot...tattoos are like a personal code, a summary of one's life up to then. Tattoos speak. They say...I am from here, from this area, this society, this country. I have loyalties towards certain people... from a certain area. These are my criminal specialties, this is what I do, this is my job. These are the prisons where I have been [pointing to his hands], and how many times, everything.

There are images that appear to be one thing, but they are not; [images] of the Holy Virgin, of the Cross, of the church; many things that actually mean something different in their code, in criminal language. And if you change the position or place of the tattoo, instead of having it on your chest, you have it in your back, or on your leg or shoulder, or in another position, towards the right or towards the left, it slightly changes the sense of the image, of the idea." 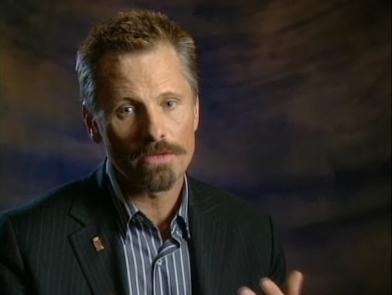 Univision.com Video 9.23.07.
© Univision Communications Inc. All rights reserved..
How he prepared for his character

"I also went to Russia a couple of weeks before filming. It was quite funny. I had not been there. I went to the big cities: Moscow, St. Petersburg, and I spent several days in each place, taking the subway...public transportation...walking a lot...to look at people. And I did it on purpose, although the production people were kind of scared because I disappeared for two weeks and I came back right before shooting started. And they said: 'Phew, it's great that this guy made it back, otherwise we would have been screwed' [laughs]. They said: 'Don't you want to go with a bodyguard?' or 'We can get in touch with people in Russia', and I said: 'No, I have some contacts', because these people I had spoken with, the ones that had taught me about street slang, when they realized I was not going to make fun of them, or judge them, that I simply wanted to do it right, they had helped me and they had told me: 'If you go to Russia, I have a brother...I have friends...they can show you some special places.' And the idea was tempting, but what I wanted the most was to go without any filters, without guides, to see what would I find, what I would think, what I would feel, without filters, without anybody telling me: 'Well, you have to go this way, but not that way.' I went wherever I wanted, and that's how I did it.

Then I went far, far away, to the center of the country, where Europe ends and Asia starts, because that's where the character comes from more or less, although maybe he hasn't been there for a long time, that's his place of origin.

And that is something that is not written, I mean, it is written a bit, but it's not something that I can explain watching the movie. I can simply say that when you make that effort in preparing a character, there is something in the behavior, the way you move, your face...the language also helps, it changes the way you express yourself. For example, I am talking to you in Spanish and I realize that I am using my hands [moves his hands more]; if I am talking to you in English, I'm more still [motionless look on his face]. But the Russians also have their way of expressing themselves, it's not exactly like the Latinos, but it is their own thing. And you can imitate it, but the combination of talking...and some subconscious things that happen, little by little you start moving like them. And by being with them all the time, without being able to speak English or Spanish or anything...speak very little really, and listen a lot [laughs], because I was learning... and that helped me a lot, and I think that it also helped the others. Because when I meet Naomi Watts, the British character in the movie, there is a distance, an initial lack of understanding between them...[being] a man and a woman, but it also has to do with culture, perspective, sense of humor, everything. I don't realize that she is making fun of me, that she made a joke, and she doesn't either. Because the Russians I met, often make a joke, but they make it like this [expressionless look], and you get it or you don't. And all that helps..."
Top of this page
Last edited: 27 September 2007 14:42:51