A New John Wayne: Viggo Mortensen Saddles Up for Hidalgo 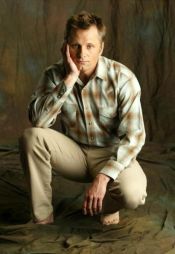 Viggo Mortensen was being difficult.

He was on the Morocco set of Hidalgo, his western adventure that opens today, and he felt it necessary to remind director Joe Johnston and the rest of the crew who the star of the movie is.

It's the kind of primadonna move you might expect of a guy who has come off The Lord Of The Rings trilogy, one of the most profitable movie franchises in history. And as Hidalgo's slow-talking cowboy Frank T. Hopkins, who takes on top Arabian chargers in a 3,000-mile desert horse race in the year 1890, Mortensen is in nearly every heroic frame. Why shouldn't he have a bit of an ego trip?

Except that the usually self-effacing Mortensen wasn't demanding more attention for himself. He was speaking up for his horse T.J., the cream-and-sorrel nag who plays the title mustang of Hidalgo.

"I was glad to remind people a lot of times about that," said a flannel-shirted Mortensen, 45, recalling memories in a recent Toronto interview.

"People kept saying, 'Frank this and Frank that.' And I'd say, `Well, last time I checked, the movie is not called Frank Hopkins. So let's keep in mind that the horse needs to be (front and centre)."

Mortensen also requested and received permission to change a parting line from "I won't forget you" to "We won't forget you." A rider both by hobby and by profession - he's been riding since childhood, and he had loads of saddle time playing mounted hero Aragorn in The Lord Of The Rings - Mortensen wanted to make it clear that both Hopkins and Hidalgo felt the pain of saying goodbye.
There's no danger of anyone overlooking T.J. The horse has so much personality, he makes Seabiscuit seem like a dog biscuit. The same goes for T.J.'s equine stunt doubles.

"I really bonded with T.J.," Mortensen said, sipping on a ceramic mug of maté, a bracing South American tea he favours. (No kidding about the horse love - he purchased T.J. after the movie wrapped.)

"I also bonded with the other ones who helped play Hidalgo. There were four other ones who were available, and who did certain things, and it was hard on all of them. They all came from different parts of the country - Michigan, Texas, northern California - and they were all brought together and trained really hard. We rode a lot of hills and mountains and hard terrain to get them into really great physical shape.

"And then they were flown, which is an ordeal for a horse, from L.A. to Rotterdam and trucked all through Europe, before being flown from Spain to Marrakech. By the time they got there, they were fried, and that was only the beginning. They had a lot of problems with the dryness and the congestion and with their hooves and all that. They weren't used to the desert climate."

A scribe can't help noting that Mortensen wasn't half this emotional about the four Hobbit actors he worked with on The Lord Of The Rings. Sean Astin nearly lost a foot and Elijah Wood had an emergency appendix operation, just to name a couple of the many Rings zings, but you didn't hear Mortensen in interviews praising their stoicism.

But - and here's a crucial difference - the Hobbits can speak for themselves, and horses can't. Mortensen identifies with strong, silent types, which is how he's been described in innumerable scribbles since 1985, when he first gained attention with a role in 1985's Witness.

It should come as no surprise to learn that Mortensen is an admirer of Greta Garbo, the "I vant to be alone" diva, and also John "The Duke" Wayne, star of Howard Hawks' Red River, a classic western and one of Mortensen's favourites.

"I just think John Wayne was wonderful, and I'm not looking at him as just this icon," said the chisel-jawed actor, a study in seriousness behind innocent blue eyes.