"I have to play this naked"

Source: Los Angeles Times
David Cronenberg put Viggo Mortensen through the wringer once. Now the actor's back for more. 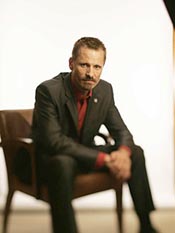 Image Al Seib.
© Los Angeles Times.
As Viggo Mortensen and director David Cronenberg plotted the unforgettable bathhouse knife fight in their new crime thriller, Eastern Promises, Cronenberg told the actor he wanted realism and "body-ness." The director wanted to challenge his audience to really experience the intimacy of such violence.

"Well, it's obvious," Mortensen told him, "I have to play this naked."

Boy does he. And Cronenberg captures every clammy square inch of Mortensen's well-toned flesh as it's pummelled and slashed and slammed into the unforgiving bathhouse tiles by two clothed real-life professional fighters, turning an otherwise excruciating four minutes of film into a quintessential Cronenberg statement.

Eastern Promises, a Focus Features release opening Friday in L.A. and in 1,500 theaters nationwide on Sept. 21, explores the fine line between fragility and brutality, humanity and horror in the lives of three Londoners: Russian mob driver and sometime "fixer" Nikolai Luzhin (Mortensen); London midwife Anna Khitrova (Naomi Watts), who is striving to unite an orphaned baby with her Russian family; and mob boss Semyon (Armin Mueller-Stahl), who hides his sex slavery trade behind the guise of a grandfatherly restaurateur.

The film is Cronenberg's first collaboration with Mortensen since their 2005 Oscar-nominated A History of Violence, a critical and commercial hit that fans of Cronenberg's previous work - Dead Ringers, Naked Lunch and The Fly, among them - considered surprisingly accessible. It's also a tough act to follow.

So far, reviews have been strong, praising Mortensen's complete immersion in the role - adapting his body language and perfecting the accent - calling the performance "brilliant," and even "Oscar-caliber." Indeed, Focus Features' decision to open the film in mid-September, traditionally a dead period for serious films, could give Eastern Promises a jump on the glut of performance-heavy fare coming in October.

And despite its disturbing subject matter and memorable fight scene, the film could prove even more commercial than A History of Violence. It has just three scenes of violence. But the director gives each throat-slice, each blood pool a natural, three-dimensional effect.

"I have a very existential approach to the human body," Cronenberg said. "I take bodies seriously, [as if] I'm actually photographing the essence of this person."

"Unless you have a story this profound, it doesn't matter how good anything looks," added Mortensen. "Then you just get an exercise in brutality. That's what I like about his films. It's like real life."

Mortensen is only the second actor in Cronenberg's 30-odd-year career to collaborate twice with the director. (Jeremy Irons is the other, having starred as twin gynaecologists in 1988's Dead Ringers and as French diplomat Rene Gallimard in 1993's M. Butterfly.) The affinity between Mortensen and Cronenberg was evident as the two friends deconstructed the Eastern Promises naked fight scene recently, sitting opposite each other in the director's fashionable Beverly Hills hotel room, volleying tongue-in-cheek gibes, often finishing each other's thoughts.

Still, Cronenberg pointed out that it took some convincing to get Mortensen to agree to the part of Nikolai.

"He plays hard to get," the director said.

"I'm always very reticent until I have a handle on it," Mortensen said. "I wanted to make sure I had the proper time to prepare."

Mortensen researches his characters exhaustively. To understand mobster turned small-town family man Joey in A History of Violence, he took a road trip through the Midwest and spent time recording costar Maria Bello's uncle, a Philadelphia native, to nail his accent.

For Eastern Promises, Mortensen set out alone for Moscow, St. Petersburg and the Ural Mountain region of Siberia, spending weeks driving around without a translator. (The actor speaks Danish and Spanish fluently and can get by in four other languages.) Mortensen studied the gangs of the vory v zakone (thieves in law). He read books on Russian prison culture and the importance of prison tattoos as criminal résumés. He perfected his character's Siberian accent and learned lines in Russian, Ukrainian and English. During filming, he used worry beads made in prison from melted-down plastic cigarette lighters and decorated his trailer with copies of Russian icons.

Mortensen's work ultimately became the foundation for the role, prompting some changes in the script and even guiding Cronenberg's direction. The actor credits Cronenberg with granting him the creative freedom to push his characters into surprising places. Cronenberg said he couldn't work any other way.

"I really invented myself as a director," Cronenberg said. "A lot of directors are very territorial and they don't really want to hear anything from other people, especially actors."

"They don't want to admit they don't know something," Mortensen said.

"It's a matter of control and fear," Cronenberg concluded. Instead, he asks actors to "come play in my sandbox."

"Once you accept that childlike-ness," he said, "everything else becomes more clear."

Mortensen's 360-degree nudity in the fight scene is a prime example of how their relationship aided the film. Despite its complexity - hand-to-hand combat among three guys in a compact and very slippery space - they rehearsed only a few hours and then captured the fight in just two days.

"I knew I was in good hands as far as the director went," Mortensen said. "It wasn't an exploitation. . . . After that fight, my character knows everything's different. There wasn't any other way to do it. So let's get on with it. The sooner we got it over with, the quicker I could heal."

"The makeup guy would say, 'Have you seen how swollen Viggo's knees are?' " added Cronenberg. "I said, 'No. Don't tell me that.' "

Recalling his vigorous and bruising staircase sex scene in A History of Violence, Mortensen quipped, "It's revenge for Maria Bello."
Top of this page
Last edited: 12 September 2007 06:53:46