Viggo Where He Goes 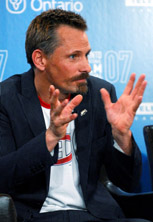 Eastern Promises Press Conference - TIFF: 9-8-07.
© AP.
Far from the two-dimensional screen crook who is up to no good, Viggo Mortensen gives a tour de force performance as a murderous yet enticing Russian gangster in Eastern Promises.

In this riveting new thriller from Canadian director David Cronenberg, Mortensen is a made man with longtime connections to London's biggest mob family. When chance intervenes, this meticulously clean-cut, low-key hood crosses paths with an innocent midwife (Naomi Watts) who has stumbled upon information that could bring him and his killer associates down.

That's when the bodies begin to drop like flies

With muted villainy, this hood's eery stillness creeps across the screen, twining around Watts and the audience's consciousness like some silk stocking about to strangle an unsuspecting neck.

"This is a guy whose suits are crisp and clean. His accent is just so. There's a reason why he would drive one car as opposed to another. We thought about all of it when we started building him and the other characters," Mortensen said at his press conference for Eastern Promises at the Toronto International Film Festival.

"I'd never played a Russian before. I thought I knew a lot about Russian history but I learned a lot more doing this," says Mortensen, who nails the accent and the unspoken mannerisms that capture this murderer's origins with subtle perfection.

Knowing someone is impossible

There's Oscar buzz brewing about Mortensen's peformance - a virtuoso study of how violence corrupts absolutely. In this, the second collaboration between Cronenberg and Mortensen since A History of Violence (2005), the duality of good and evil that lives in all of us - even a seemingly inhuman and irredeemable gangster like this - is the key to this captivating flick.

"What David really shows us in this film is that it is impossible to get to know someone else completely," says Mortensen. "You know we're all going to suffer. We're all going to die, so what's the point of going on. But you do."

Ultimately it is that innate reach towards hopefulness that drives Mortensen's morally bereft character on, as well as director Cronenberg and his work. "I don't think of this or any of my films lacking a sense of hopefulness," says Cronenberg. "If you're still struggling you're hopeful."

When it came to filming Mortensen's violent and horrifying nude scene, the actor says, "It is what it is." Thankfully taking only a couple of days to shoot, Mortensen says the grim reality of that moment was one that had to be told straight up, just as Cronenberg does.

As Mortensen jokes about the hard-to-watch nude scene, "They paid me a lot of money to do it."

"The big secret is that Viggo has no genitals," Cronenberg wisecracks back, claiming that special effects gave his star what God did not.