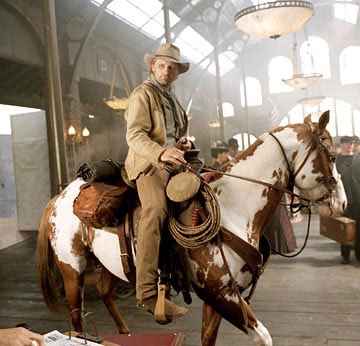 There are several terrific scenes including a bad guy attacked by psychotically acrobatic desert cats, and a breath-swallowing thunderhead of sandstorm. But I love the ending. It's hopeful, bittersweet, epic: a vast herd of wild horses set free against a vaster range of hills, undulant flesh against undulant verdancy. And holding the shot. And choosing the precise gratifying, heart-stopping frame to place another, similar perspective. It's like a shot of the ocean, a river, the limitless sky.
Top of this page
Last edited: 11 August 2007 10:33:14
© Movie City News.