Viggo, More Leonese Than Ever

Source: Diario de Leon
During the presentation of Alatriste in Denmark, the actor displayed the Leon flag, and in front of hundreds of people, he said it was "a gift from the Old Kingdom."

The town of Valdeteja, "home" of Alatriste, is planning to name a park after him, and to place a monolith with his name. 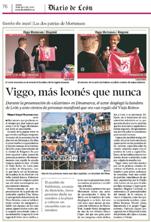 © Diario de León.
Certain loves last forever regardless of the distance that separates them, and Viggo Mortensen's love for Leon is worthy of praise.

From the webpage www.viggo-works.com, we get recent images of the Alatriste screening in Denmark. In these images, the actor manages to surprise us again by presenting the Leon flag to a representative of the city of Ringsted. In perfect Spanish, and in front of hundreds of people, Mortensen proudly shows the Leon flag while he says: "From the Old Kingdom of Leon to the city of Ringsted", thus paying homage from Alatriste's motherland to the beautiful Danish city. Let us remember that Viggo's father is from Denmark.

After the presentation of the movie from Spanish director Diaz Yanes, the protagonist of the Perez-Reverte character signed, as usual, hundreds of autographs and talked to the public, some of which still remember him as the timeless Aragorn from the Lord of the Rings trilogy, while they asked him about his new projects and latest movies.

This is not the first time that Mortensen has displayed the Leon flag right next to him at a presentation and signing. He did it some months ago in a popular New York library when he was signing copies of one of his last books, Linger, in which a lot of images are dedicated to Leon and its province. In Japan, during a TV interview in which he was wearing the shirt that the Spanish "alatristeros" had given to him, he gave an excellent lesson on Leon gastronomy.

Cannes also witnessed the actor's love for this land, when he appeared on the cover of specialized magazines sporting a black Leon t-shirt, and according to Diaz Yanes, he always displayed the red flag in his hotel bedrooms too.

During the first week of October, Viggo is planning to participate in a charity event in Madrid for children affected with leukemia. It will consist of a series of simultaneous chess matches organised by the Loewe Foundation, in which the Grand Master and Norwegian wonder kid Magnus Carlssen will play against 25 celebrities from the movie industry, sports and cultural world. Some names include Milos Forman, Woody Allen, Baremboim, and Viggo himself. Besides, Carlssen will play again in the Magistral Leones next year with Anand, Aromian and Vallejo.
Top of this page
Last edited: 21 July 2007 13:36:36