"It was a big, brutal mess"

By Leif Kramp - translated by Doreen

Source: Kino
Although his success has catapulted him into Hollywood's first league Viggo Mortensen stays natural and calm. He is anything but heroic but plays the hero again in the Spanish monumental epic Alatriste. 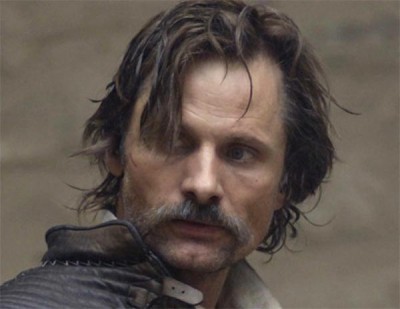 © 20th Century Fox/Estudios Picasso/Origen ….
How difficult was it for you to find your way in Spain?

When I was a child my parents, my younger brothers and I often moved. We lived in South America for several years - in Venezuela and Argentina. I learned Spanish like I learned English, not only in school but also on the farm. The culture became a part of me. So there was no language hurdle for me although I was really nervous because I wanted to do it perfectly.

What was the reason for your interest in the vast subject of Captain Alatriste?

Even if it sounds like a platitude: The script was spellbinding from the first page on. When I read it I created an inner world which was fascinating. I didn't know the novel by Arturo Perez-Reverte but I had read another book by him. When I met the unbelievable passionate director Agustin Diaz Yanes I was totally convinced that it could be a real adventure.

Now you are the hero again...

It's more than that. The story seems to be simple at first glance but if you have a closer look you feel how complex every single character is and how the whole story develops in different directions. Nothing is one-dimensional, everything is bound together.

The film set a record in Spain. Why do think it is so popular?

The film tells about world history from an unusual perspective. The history of Spain was always told from the British view or from the Hollywood one but Spain was a big empire and we all forgot that it was attacked by Britain, Denmark and Holland. Usually Hollywood films describe the Spanish people as pitiable but our film shows that they were the biggest power in the world.

It is a rather brutal film. Was that a problem for you?

The reason is that it was true for this time. The authentic violence of this time is a power of the film. Especially the fight scenes, daunting on the big screen at full blast. At least I felt this way because no one attaches importance to an aesthetical fight. It should only be real.

It was a big brutal mess: no slow-motion, no presentation of the sword, no glorification. Being a spectator you really think about leaving the hall after ten minutes. Those who stay will be pulled into an unbelievable world.

You were already an international star when you signed for this role. How important was a suitable payment for you?

I don't care about money. I wanted to give myself the challenge which was extremely big for me. Maybe I don't behave very cleverly when I choose my roles because I listen to my feelings or my heart.

Sometimes I regret deciding on a film because shortly afterwards I get another offer which I would have preferred more than the other. I just have no career plan. But I stay the course. Now and then there's a film which is perfect from the start until the end and gets a lot of success.

How do you deal with your fame?

Sometimes it's too much for me but most of the time I'm happy that so many people are interested in my work.

What have you learned from your films?

That it's possible to have real fun at work. It's a wonderful change compared with extravagant shootings which make it impossible to get to know each other or to spend time together.

Is it really possible to make friends in the film business?

Of course. In every film I make at least one friend.

In the past you worked as a truck driver. Was it your plan B if the acting didn't work out well?

I have no plan B, not even an idea how it will go on for me. I just live. I feel well with doing what I want to do and I even get paid for it - sometimes extraordinarily well paid. I feel much better than other actors who are very talented but not always on camera or on stage and who are worse off than me.

Do actors need a good business sense to have success?

I'm not good in business things. I do not save money. Sometimes it happens that I suddenly have no money and realise that times are going to be worse. But it still goes on. At the moment it doesn't matter whether I use money sparingly or not.

Your life sounds easy and untroubled. Is it because other people assist you in your work?

I wash my clothes and dishes. I even vacuum. Maybe it's not so thorough as someone would wish but I don't have assistants. It would be an absurd idea that people should carry my baggage. When I have no milk I go to the supermarket. When I'm hungry I cook. I want to be responsible for myself. When I lose something then it's my fault. And that's it!
Top of this page
Last edited: 10 May 2007 09:54:03