By Ernesto Garratt - translated by Xabo 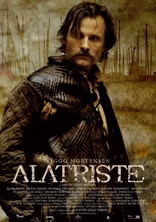 © Twentieth Century Fox.
It is the century of Spanish gold, the Iberian empire is at its height in Europe and overseas, although it is beginning to show signs of decay. Captain Diego Alatriste (a competent Viggo Mortensen) is a child of the glorious 17th Century, a warrior and a hero made of the stuff that makes indelible characters: he has more than enough heroism and dignity, but he lacks good luck, a title, even the right to the title of Captain which is fictitious. Alatriste is a survivor and a soldier of the Empire, witness to how the good fortune of his country runs through his fingers like sand, and his attitude is stoic and virile in the face of the tragedy that approaches: the fall of an Empire and the pillars that support it. The first of which, are people like him, who haven't a penny, but are full of courage.

Alatriste is a tragic adventure whose undeniable merit is to follow this slow national decline through a hero who is an anti-hero, melancholic, given to try his luck but simultaneously full of charisma and always framed in shots with a precious direction of art, that recreates with historical rigour each scene as if looking at a picture by Velazquez. Inspired by the Capitan Alatriste novels of Arturo Perez-Reverte, the movie has a slightly slow narrative at the beginning, but soon the fluidity and the accurate recreation of the period take over the screen with good battle scenes, enthusiastic sword fights, passionate romance and determination against adversity.

Diego Alatriste breathes strong and well in this good example of a European superproduction and the visual spectacle does not disappoint. Neither does the narrative effect that the director imposes, Agustín Díaz Yanes, which reduces this simple adventure to serious glances to give a depth of time and its defeats. In addition there is a good cast of secondary actors that follow the hero (his beloved - Ariadna Gil; Count of Guadalmedina - Eduardo Noriega; real spokesman in charge - Javier Cámara and also the evil inquisitor interpreted by Blanca Portillo) and there are the historical winks (Francisco de Quevedo - Juan Echanove- as friend of Diego). This is a surprisingly superior movie with its own identity and seal.
Top of this page
Last edited: 7 April 2007 13:18:47