Presentation of Alatriste in Chile

By Rebeca Fuentes - translated by NacidaLibre

Source: Terra Chile
Chaotic arrival of the leading man of Lord of the Rings at the premiere of his new film

The renowned actor Viggo Mortensen was bothered by the never-ending harassment of the 'yellow' press, however, despite the persistent reporters and the crowded place, the leading man of the most expensive Spanish film in history was kind and patient. 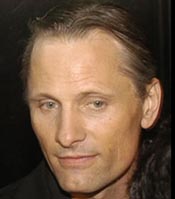 © Terra.cl.
Once more, the harassment of the media has been a negative surprise for the internationally renowned stars that visit Chile. First, it was Penélope Cruz who complained of being besieged by the 'yellow' press, now it was the outstanding actor Viggo Mortensen who was in our country to promote his new film Alatriste.

The leading actors of the most costly Spanish film of all times were received by a crowd of journalists and photographers who were desperate to capture the best photos and talk to the stars.

Despite the producers of the premiere, which took place at the Showcase Parque Arauco, having tried to organise everything so that there were no problems, and so that each press member should have their chance to cover the glamorous event, it was impossible to keep order, which bothered the actor who played Aragorn in The Lord of the Rings, despite it though he was kind and very patient.

The leading man of A History of Violence, who arrived dressed in an impeccable black three-piece suit, had to walk up a red carpet that was full of reporters who did not respect their assigned places and desperately crowded in to get closer to the famous actor who looked tense under the barrage of flash lights that lit up his face and the insistence of the female reporters that begged him for a photo with them.

Once the actor was inside the hall, he was taken by the security personnel to the lift, in order to protect him from the hordes of ecstatic reporters who were trying to extend the star's stay for as long as possible.

After this the press were taken to the third floor of the cinema complex for a cocktail party which was attended by personalities from the Spanish Embassy, as well as some actors that were not prepared to miss the Spanish film premiere, such as Fernando Godoy, Álvaro Morales, escorted by an unknown young lady, and Liliana Ross.

The leading actors of the film only appeared to give a brief talk alongside the Spanish Ambassador, before leaving the event.

Mortensen did not stay to see the film with the guests, he left as quickly as possible, together with the actress Ariadna Gil and the director Agustín Díaz Yanes, in a van to which they were escorted by guards that were trying to protect them from the harassment of the press who were desperately running to speak to the lead man of Lord of the Rings one last time.

The production team explained that the American actor's rapid exit was because he had to attend a supper for which he was late.
Top of this page
Last edited: 29 March 2007 10:41:23