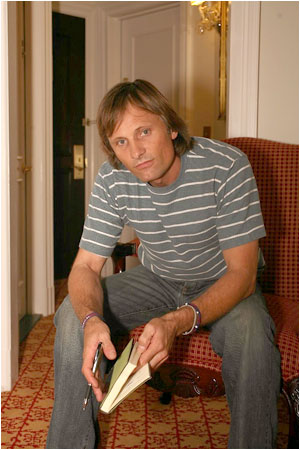 Image Chester Higgins Jr..
© New York Times.
Pity Viggo Mortensen, the director of the Center for Multireligious Studies at Aarhus University in Denmark. He edited an anthology called Theology and the Religions: A Dialogue, and all it does is make people angry. They order this $35 paperback by mistake. Then they grouse about it online, because they thought it had something to do with the Lord of the Rings guy.

Indirectly, Mr. Mortensen's Perceval Press is a Lord of the Rings offshoot. It began operations in 2002, soon after Mr. Mortensen had finished playing the warrior-king Aragorn in the movie trilogy. His first book, the poetry collection Ten Last Night, had been published nine years earlier. And by 2002, his art gallery exhibitions and books were arriving on a regular basis. Thanks to "the movie, you know, notoriety," as Mr. Mortensen mumblingly describes his career trajectory, they were selling nicely too.

In 2003 Perceval's roster included three books of Mr. Mortensen's: Miyelo, 45301 and For Wellington. Their combined effect was to put the business in the black. When his own output is smaller, however, profits are low or nonexistent. Perceval's print runs are small, Mr. Mortensen said, there is no real advertising, and its books are available primarily online from www.percevalpress.com. The point of the enterprise is to cast light on work that might not otherwise be published, and to present artists' work as it was intended to be seen.

Recently, en route to a film festival with Alatriste, a swashbuckling Spanish-language film based on the popular novels of Arturo Pérez-Reverte, Mr. Mortensen stopped in New York. He had preliminary versions of Perceval's four forthcoming books in tow. Perceval now puts out about eight books a year, all shepherded by Mr. Mortensen in his typically hands-on, "nitpicky" fashion.

On this particular day, Mr. Mortensen was ensconced at the Algonquin Hotel, where the main floor recalls the Round Table, and the upstairs wallpaper pattern is fashioned out of New Yorker cartoons. His own literary tastes are not so gilt-edged or mainstream. One of the fall titles, which are expected to be ready at the end of November, is a Spanish-language critical anthology devoted to new Cuban art, intended primarily as a university-level textbook. Henry Eric Hernández's book La Revancha/Revenge is a bilingual alternative to official accounts of the Cuban revolution. A third new book, Magical Meteorite Songwriting Device, reprints a set of vibrant collages made by the singer Exene Cervenka of the Original Sinners -- formerly with X, and formerly Mr. Mortensen's wife.

None are more serendipitous than the ones that yield Mr. Mortensen's own books, which are often prompted by the globe-trotting that goes with his film career. His latest, I Forget You for Ever, is also due in November. It takes its strange title from a phrase written on the side of a bus in Iran.

Perceval will print 2,000 copies of I Forget You for Ever and sell them at $38 each. That print run is twice what other Perceval books are usually given, but for good reason: Mr. Mortensen's books sell out. They also go into multiple editions: one book, SignLanguage, has had eight printings, while Recent Forgeries and Coincidence of Memory have each had seven. And as to the question of whether Mr. Mortensen's own books bring in revenue, the manuscript for Ten Last Night (which was published by Illuminati) has found its way to the used-book site Alibris. Price: $16,499.95.

I Forget You for Ever is another of Mr. Mortensen's eerily abstract photo essays, with haunting images that are titled in cryptic, oblique fashion. One street scene, Arieto, is named for the barely visible label glimpsed on a broken record. Less subtly named are pictures of foreign cities entitled Bomb This, intended as a form of deterrent.

Next time Mr. Mortensen does a book, it's likely to feature glimpses of Russia and London, locations for the not-yet-titled film he is currently making for David Cronenberg (who directed him in the 2005 film A History of Violence). After that, he has three more films planned.