"I'm a guy who sticks his nose in everything"

By Stuart Gollum - translated by Margarita 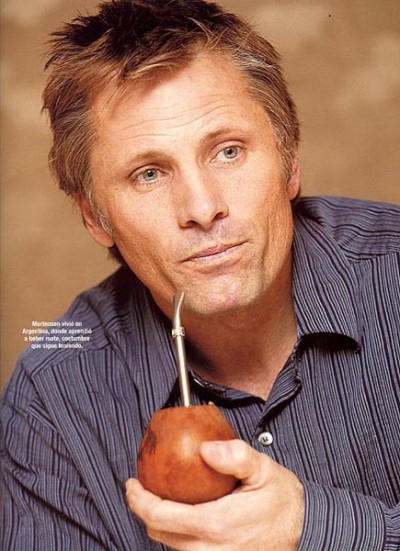 Image Armando Gallo.
© Gala.
Success has given him economic stability, now he wants time to spend with his family.

Viggo Mortensen, the actor, returns to the big screen on September 1st in the role of Spanish hero Alatriste. Mortensen is considered a very attractive man, but he isn't interested in being a star or in taking advantage of his success to feed his ego. He prefers to retreat to the mountains and forget the outside world that admires him for his looks and talent. Divorced and the father of a teenage son, Viggo is going to take some time to reflect and prepare himself for the start of his next project, Eastern Promises, filmed with his favourite director, David Cronenberg.

How has a Hollywood star taken to fame in Spain?

I've been making movies for 22 years. Some have afforded me enough to live on and others haven't gotten me through the end of the month. Fame doesn't interest me. I've never wanted to be stopped on the street. Simply put, I like my work. To live in the south of Spain and be recognized made me wonder whether I really needed to go outside with the whole world watching me. So I'd go out at 2 in the morning, when I wouldn't be seen.

Fame has its inconvenient side?

On one hand it's an honour, on the other it's an invasion of privacy. If I'm sitting having a beer and someone comes over and says "I'm sorry to bother you...but". It can be a nuisance because you don't know them. And of course it's annoying. Fame is what it is. The first reaction for a human being is to get angry. Then you adapt to the new situation and confront it tactfully.

Why did you want to play Alatriste?

Because it's a story based on a novel with real characters from the 17th century. The style of fighting is very particular. I've had to learn fencing and it has been fascinating. When I arrived in Spain and got into my character, I thought about Captain Alatriste being from northern Spain, one of those people who doesn't make friends very easily, and I liked the idea.

Why did you prefer a Spanish film to an American movie?

It's a great story and a very interesting time period. Spain in that era was like the USA is today. If the story was set in modern times, Alatriste would be an American sergeant in the middle of the Iraq war. The truth is that years go by but the problems that humans face don't change.

Have you ever been involved in a fight?

Yes, but I've never killed anybody.

I meant a fistfight, not killing anybody.

I've always tried to avoid it. I prefer to talk before arriving at blows, but for some people hitting is like shouting, and I admit that I have had the urge to do so like anybody else. I don't do it because I know that afterwards I'll regret it. I'm capable of saying "I'm sorry" and of forgiving and I have the capacity not to hit. I believe it's important to control your temper and impulses.

Injustice drives me crazy, whether it's on the part of an individual or as part of society. I also don't tolerate dishonesty, manipulation, the selfishness with which human beings fail to care for their world.

Politicians make me angry much more frequently than other problems do.

Do you also get angry with your son?

No, never. I've never known a boy as well adapted to society as my son. Physically he's very tall, very strong and very good at martial arts, but at the same time he's a very calm person. He doesn't get upset about anything, he's very reasonable and sure of himself. My son is sociable and has friends but he's his own person.

You're not very conventional, and you even wander around barefoot in the city. It seems like you don't care what people think.

Today I put on shoes and got dressed for the interview. As you can see, I do worry about what others think, but it's true that I also think for myself. I walk around without shoes because it's more comfortable. People sometimes cultivate their passions and take them to the extreme, I don't think I'm that different from others. I'm not very conventional when it comes to my work.

While others take advantage of their success, you're thinking of taking a break.

I suppose I have a different point of view. If I had wanted to take advantage of things, I would have made 6 movies over the last 2 years. I've earned enough money for my family and I to live very well, as well as my friends. I'm very happy with what I have and I appreciate the opportunities that Lord of the Rings gave me, because without that movie they wouldn't have asked me to film Alatriste. I'm a very grateful man.

What are your priorities at this moment?

To be with my family. I'm travelling constantly, searching for answers to my questions, but I don't have time to listen. Time passes, the world changes, people evolve and it's nice to stop every now and then and not do anything. I want to imagine things that interest me, to give myself time to get excited about something. I know that I'm capable of doing several things at once, but it's difficult to work and be at peace. I learned a great deal with Alatriste. It was a wonderful experience and now I have to process it all and rest.

Do you receive fan letters?

There are people who are very diligent and who write to me twice a year. They've become part of my life. Most of the letters are nice. It's always flattering to hear what people think of me. I think those letters connect me to the public and are one reason to keep working.

You're also a photographer. Have you taken photographs during the filming of Alatriste?

Yes, I took many. Some in black and white. Now I don't take as many pictures during filmings as I used to, because I'm focused on my character.

We get the impression that you have many passions at the same time, photography, painting, poetry, jazz...

I'm a very curious guy and I stick my nose in everything. I travel a lot because I'm interested in knowing how the rest of the world lives. I love to learn about other cultures, to submerge myself in them, to learn of points of view that are different from mine. One of my passions is imagining the lives of other people. If I'm in a taxi, I imagine the life of the driver. I always ask their name, where they're from and how they got here.
Top of this page
Last edited: 17 December 2006 12:16:02
© Gala.